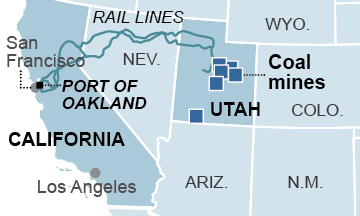 A long-shot proposal to send coal 700 miles overland from Utah to Oakland for transoceanic shipment to Asian markets is dead.

A U.S. bankruptcy judge in Kentucky last week approved a plan by the proposed project’s major creditor, Autumn Wind Lending LLC, to take over a sublease at the Oakland Bulk and Oversized Terminal (OBOT) that was held by Utah-based Insight Terminal Solutions (ITS) LLC. Autumn Wind Lending is a subsidiary of a private Los Angeles-based investment fund that has shown no intention of utilizing the terminal for coal exports. The ruling follows a refusal by the Utah Legislature in August to give ITS a $20 million bailout.

ONE OF THE PARTIES THAT AUTUMN WIND MUST WORK WITH GOING FORWARD IS THE CITY OF OAKLAND, which was suing already to invalidate the city’s lease with OBOT. If the city prevails in that lawsuit, Autumn Wind’s sublease with OBOT—the only real asset in the bankruptcy proceeding—would be essentially worthless, and the leases would have to be renegotiated. Oakland, which cites neighborhood health risks in opposing coal coming to the port, is unlikely to approve any lease that allows coal. Autumn Wind pledges in the bankruptcy case to “actively participate in settling all of the Debtor’s regulatory issues with the City of Oakland.”

The news, a long time coming, marks a bellwether moment for U.S. coal exports from the West Coast. Asian appetite for American coal is in decline as the region turns to other forms of power generation.

Price is an indicator—or the indicator—as can be seen in the chart here. 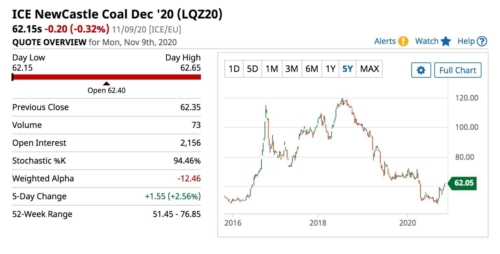 THE OAKLAND PROJECT, WHICH DATES FROM THE EARLY 2010s, WAS HOBBLED FROM THE START by questionable assumptions around the future viability of the U.S. coal-export business. Even in the best of times, U.S. coal producers served as only swing suppliers to Asian markets, taking up marginal slack when Australian and Indonesian producers did not meet full demand.

Distance and cost were problematic, and they remain so, as IHS Markit notes in a current research assessment:

IEEFA noted five years ago that the Utah-Oakland coal export plan was fraught with financial risk, and time has borne out that assertion. An excerpt from the prevailing creditor’s filings underscores the irredeemable finances and the reason ITS failed to attract investors:

The Debtors presently do not have a single dollar to fund the plan.

“The Debtors presently do not have a single dollar to fund the plan. They have no business operations. The Plan relies on the remote possibility of obtaining funding at an unknown future date from four counties in the State of Utah (the “Counties”) for the purpose of building a port in Oakland, California to export coal internationally (the “Port Project”). But the Counties do not presently have the funds either.”

THE PROJECT WAS SUPPOSED TO SEND COAL MAINLY TO JAPAN, but as IEEFA explained in a follow-up brief this past August, “Japan is part of a larger trend in developed Asian nations to move away from coal.” This leaves U.S. exports—especially West Coast exports—out of the money. Similar initiatives in the states of Oregon and Washington have also foundered.

Autumn Wind, which was ITS’s largest creditor, will pay another creditor $2.1 million and will pay $4.8 million to OBOT to take the port sublease. While it remains unclear what Autumn Wind intends to do with the terminal, the firm has no apparent interest in coal, in contrast to ITS, whose CEO and chief operating officer came from that industry.

IEEFA Asia: Why 2020 is turning out be a pivotal year for fossil fuel exits

Brent Israelsen is a guest contributor at IEEFA. 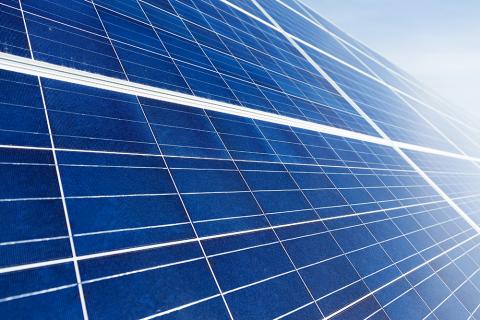