Despite high prices, the global LNG industry has struggled to keep plants online

Despite having more incentive than ever to keep LNG plants operating at full capacity, the global LNG industry had a disappointing track record this year in keeping plants running and LNG flowing.

Although some LNG plants met or even exceeded output targets, a number of high-profile LNG projects saw production plummet.

Maintenance problems, performance issues, and declining yields from the gas fields feeding LNG plants have all played a role in keeping LNG production low at these plants.

The instability of LNG markets makes the fuel a poor fit for developing nations looking for low-cost, stable, and dependable energy sources.

It’s a done deal: When final year-end numbers are reported for 2022, global liquefied natural gas (LNG) prices will hit their highest annual average ever. But despite having more incentive than ever to keep LNG plants operating at full capacity, the global LNG industry had a disappointing track record this year in keeping plants running and LNG flowing.

World Bank data suggests that Japan will have paid roughly $19 per million metric British thermal units (MMBtu) for its LNG supplies this year, about 15 percent above the previous all-time high. That figure mostly includes LNG sold under long-term contracts. But spot market prices have been far higher, averaging more than $34/MMBtu so far this year, according to S&P Global. During the scorching European summer, LNG prices spiked to nearly $70/MMBtu.

Red-hot prices mean that there has never been a more lucrative time to produce LNG. Even so, global output has faltered: Capacity utilization—actual global LNG output as a share of total production capacity—barely budged in 2022, compared with prior years.

Although some LNG plants met or even exceeded output targets, a number of high-profile LNG projects saw production plummet. Exhibit A is the Freeport LNG plant on the Texas coast. There was an explosion at the plant last June, sending a fireball 450 feet into the night sky south of Houston. Accidents happen, but Freeport was ripe for a mishap: regulators faulted the company for a host of safety violations, including overworking employees during the LNG price boom. Despite initial projections that Freeport LNG would return to service within a few weeks, the schedule slipped repeatedly, and federal regulators have now asked the company to respond to dozens of safety issues before it can even begin the restart process. It could be months until the project is fully online again.

Shell’s floating Prelude LNG plant off the Australian coast underperformed as well. Once heralded as a model for offshore LNG development, Prelude is now considered one of the greatest engineering disappointments in recent memory. After years of safety violations and mechanical problems, the plant caught on fire in December 2021. Shell managed to restart the project last April—only to see it shut down again in August over a labor dispute. Amid the turmoil, total LNG production at Prelude was only 37 percent of nameplate capacity through the end of this November.

These two plants are not alone. Data from S&P Global suggests that at least 14 global projects have struggled in 2022, with LNG production that fell short of both nameplate capacity and recent output. (See Table 1.) Maintenance problems, performance issues, and declining yields from the gas fields feeding LNG plants have all played a role in keeping LNG production low at these plants. 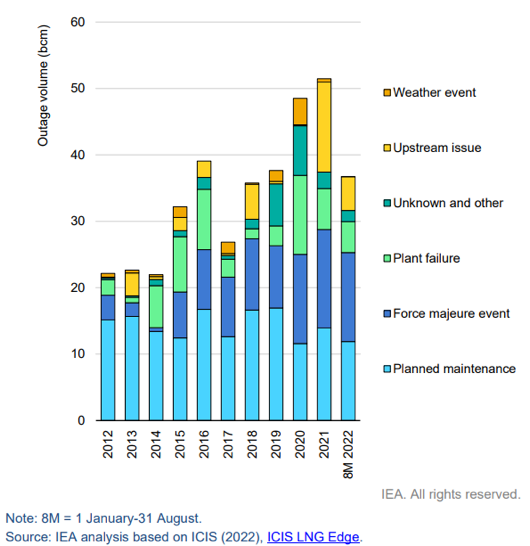 LNG buyers may hold out hope that 2022 was just a fluke, and that 2023 will see higher LNG volumes and easing prices. Don’t count on it. Many of the plants that struggled this year have a longer history of underperformance, and there’s little reason to expect meaningful improvements. Meanwhile, some of the plants that performed well in 2022 have been running above their rated capacity, and may need extended maintenance downtime to prevent accidents or mechanical failures.

An analysis by the International Energy Agency underscores the problems that LNG companies are facing by keeping their projects online. In just the first eight months of 2022, global LNG plants were offline almost as much as they were in all of 2019. (See Figure 1.) Unplanned outages were rising fast, and as of the end of August were on track to hit an all-time high this year.

The disappointing track record of the world’s LNG plants is one of many reasons that developing nations should be wary of committing to LNG over the long haul. LNG spot markets are notoriously volatile. Globally, about 90 percent of gas is shipped by pipeline, and two-thirds of global LNG is sold under long-term contracts. That leaves only about 3 percent of the world’s total gas supply on the LNG spot market. Even small shortfalls in LNG supplies can send global LNG spot prices into a tizzy.