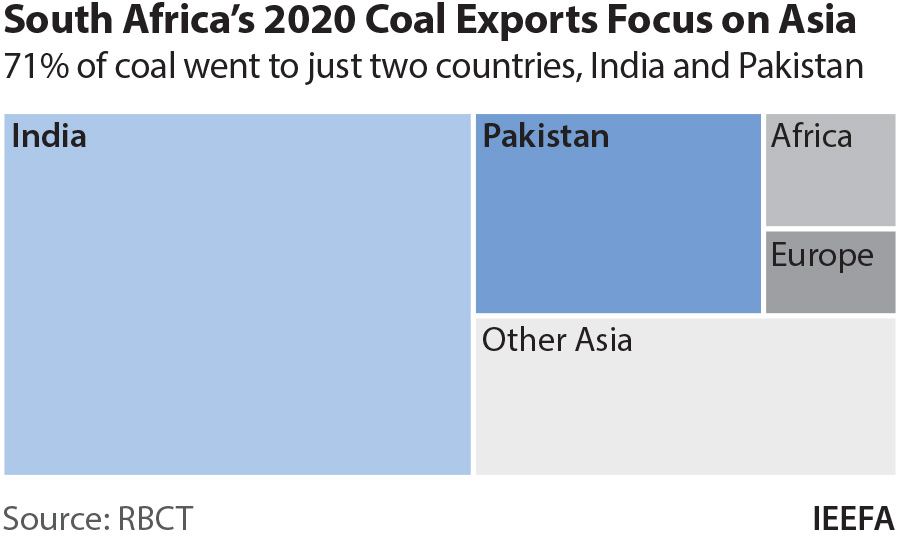 As Thungela Resources’ CEO attempts to talk up the future of the Anglo American coal spin-off, South Africa’s second largest coal export destination Pakistan is planning to bring coal imports to an end.

However, even in the unlikely event that coal power stations can remain financial sustainable amidst the ongoing wave of ever-cheaper renewable energy development globally, Ndlovu misses a key point.

In some of South Africa’s key export destinations, any continued long-term operation of coal-fired power plants doesn’t necessarily support imported coal – it makes sense from an economic and energy security point of view for them to replace imports with domestic coal. Reported in two of Pakistan’s major newspapers, the government is planning a range of reforms to address the hopelessly unsustainable financial position the nation’s power sector is in. These include the cessation of further coal-fired power development and the conversion of existing plants using imported coal (around 5,500 megawatts) to use domestic coal instead.

Reconfiguring power plants to use domestic coal may not be straight-forward but drastic action is needed reduce the cost of power generation. The debt buildup within Pakistan’s power sector is heading for US$17 billion and capacity payments to thermal power plants are expected to reach US$10 billion per annum by 2023.

The inevitable result of this is a proposed huge consumer power tariff increase – a move that will hold back Pakistan’s economic development.

The fleet of coal-fired power stations built by China under the China-Pakistan Economic Corridor (CPEC) program are proving to be a major economic burden adding to the financial crisis. Pakistan is now asking for debt relief from China on the CPEC power projects.

Pakistan’s plans to replace imports with domestic coal come as India – by far South Africa’s largest coal export destination – continues to strive to do the same.

India has been targeting import replacement for years with little result but the COVID-19 crisis has reinforced the government’s efforts as it targets economic recovery and support for Indian jobs.

South African coal exports out of Richards Bay Coal Terminal (RBCT) to India dropped 11% in 2020, driving a fall in total exports to 70.2 million tonnes. This will have been impacted by COVID-19 and the subsequent drop in power demand. However, overall coal exports out of RBCT have now dropped for three successive years.

Although some bounce back in volumes can be expected in 2021, it is now seeming increasingly unlikely that exports will reach the 2017 high of 76.5 million tonnes again. RBCT maximum capacity of 91 million tonnes per annum is entirely theoretical – around 15 million tonnes of that capacity is already stranded.

Much was made of the fact that RBCT exports have recently shipped to China following its ban on imports from Australia. However, this is unlikely to last. President Xi has committed to reducing China’s coal consumption from 2026.

In addition, China is another major coal exporter that looks set to replace imports with domestic coal in the medium term.

South Korea – another key market for South African coal – doesn’t have domestic coal to replace imports but its consumption looks set to decline as the nation’s energy transition gathers pace.

Under the South Korean government’s ninth electricity plan, coal-fired power generation is expected to decrease 23% by 2030, reducing thermal coal consumption by around 19 million tonnes per annum. A total of 30 coal-fired power plants are planned to be shut down by 2034.

South Korea will also no longer finance coal-fired power stations overseas, joining Japan in shifting away from such developments in developing nations.

As a result, the potential for new coal markets to replace existing ones is disappearing. Bangladesh is planning to cancel its coal power project pipeline whilst Vietnam has reduced its coal power capacity target from 55.3 gigawatts to 37.3 gigawatts as its renewables ambition grows.

Only 20.4 gigawatts of that lower target will run on imported coal but, given the pace at which finance is abandoning coal, it seems unlikely all that capacity will ever be built.

Thungela’s CEO has stated that the company will study the coal market over the next two years to understand the ESG (environmental, social, governance) trends.

The trend is already perfectly clear

However, the trend is already perfectly clear – governments and financiers are abandoning coal-fired power because it’s never going to be “clean” and is increasingly challenged by cheaper renewable energy. The stranded asset risk is far too great.

The trend is already biting companies seeking to open up new coal capacity, including in South Africa.

It isn’t yet clear how Pakistan would deal with the logistics of a shift away from coal imports. But its’ plans add to the growing and irreversible risks faced by South African coal exporters.