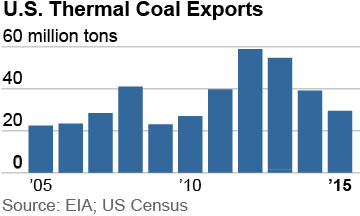 It’s no secret that the U.S. coal industry’s hopes of revival by exporting its product to Asia via West Coast ports—what Platts has called an “export or die” strategy—have been dashed by the structural decline in global coal markets.

That’s why Wyoming Gov. Matt Mead’s recent announcement that a new “clean coal” technology partnership between his state and a Japanese consortium could open up plans for exports of Powder River Basin coal only stirs up false hopes.

The region’s coal industry is on the ropes, and for good reason, and efforts to rescue it through the dreams of an export market have failed. Export projects meant to support such a long-shot gamble—including ones in Oakland and the Seattle area—have either been cancelled or are close to being cancelled for environmental, policy and financial reasons.

These projects will not be revived, mostly because they are simply not needed, as IEEFA explained in a report almost two years ago.

Even if someone were to figure out a practical solution for reducing emissions from coal-fired electricity generation plants to acceptable levels—the stated goal of the research project in Wyoming—the Powder River Basin coal industry will remain hobbled by a host of other crippling environmental hazards that are inherent in transporting coal over long distances.

Governor Mead said he expects the program will involve cooperation between state-funded researchers at the University of Wyoming and the Japanese companies.

While “clean coal” research has been an important source of public revenue for a number of taxpayer-funded research programs, especially at the University of Wyoming and The Ohio State University, these programs have not borne practical advances, even after many decades of work.  (“Clean coal” is actually a misleading description and an oxymoron – it doesn’t mean that the coal itself becomes cleaner, it means that polluting emissions caused by burning the coal are somehow being controlled to become less harmful).

Notably, the coal industry itself has invested very little of its own money in these research projects. Peabody Energy (now in bankruptcy) contributed $2 million to fund the University of Wyoming’s Peabody Energy Clean Coal Technology Laboratory in 2012, after $75 million in state money had been committed.

Other jarring examples of public dollars squandered on “clean coal” research include an Ohio bond issue passed in 1985 that has proven monstrously self-perpetuating. While Ohio limits total outstanding “clean coal” bonds to $100 million at any given time, more bonds have been issued as others have been paid off. Total public debt issued for “clean coal” research in Ohio has exceeded $200 million over the past 30 years, to support more than 400 projects that have proven lucrative for universities and think tanks but have not achieved the stated goal of “encouraging the use of Ohio coal.”

Attempts to implement “carbon capture and storage” —a way to reduce carbon dioxide emissions—at coal plants in the U.S. have turned out to be littler more than very costly experiments, leaving ratepayers holding the bag. Massive “clean coal” projects, including Southern Co.’s ratepayer-subsidized Kemper experiment in Mississippi and Duke Energy’s failed Edwardsport project in Indiana have been financial disasters. The federal government pulled the plug on its FutureGen project last year after sinking a billion dollars into it to little effect. AEP, the Ohio-based utility that consumes more coal than any other, ran a carbon capture and sequestration experiment for a while at its Huntington Plant in West Virginia but canceled the project in 2012 after concluding that the technology was commercially unviable.

But what of Gov. Mead’s pitch on Japan’s “clean coal” dreams? Our research shows Japan’s electricity-generation market in the midst of a transition that suggests its current demand for coal will only decline.

In fact, U.S. coal exports overall are have tanked over the past three years, as the chart here shows, and they show no sign of recovery. This is very likely an irreversible trend as less-polluting forms of energy continue to gain market share around the world.

“Clean coal” research will not reverse the fortunes of the industry, in Wyoming or anywhere else.  The hundreds of millions of taxpayer dollars going into funding “clean coal” research would be much better invested in accelerating deployment of affordable renewable energy and to helping coal communities weather the inevitable economic transition.