For the second month in a row, and only the third month ever, electricity generation from renewables in the U.S. topped coal-powered generation. The three main utility-scale renewable sources—solar, wind and hydropower—also produced enough power to beat out coal for the first time on a quarterly basis. 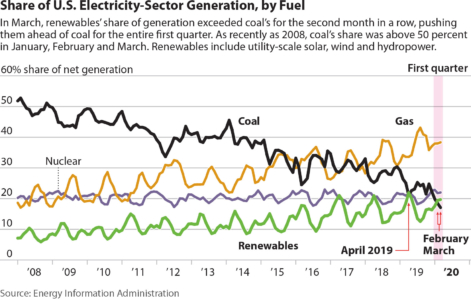 A similar monthly milestone occurred in the second quarter of 2019, but that achievement included a broader set of renewable generation sources: biomass, geothermal and small-scale solar.

WITH ITS COLDER WEATHER, JANUARY THROUGH MARCH IS USUALLY AN IMPORTANT PERIOD FOR COAL, but a combination of growing renewable capacity, extremely low gas prices and warmer weather all led utilities to cut back on coal use. Coal’s share of power generation fell to 17.1% in March, below January’s 19.9% and February’s 18.5%. As recently as 2008, coal’s share was above 50% in all three months.

Last year, IEEFA forecast that the main renewable resources would exceed coal-fired generation in the April-through-June quarter of this year, on the strength of last year’s performance and on significant capacity additions since then. Spring is usually a period of high renewable generation and relatively low overall demand. Now, with the unexpected results of the first quarter in, it is likely that renewables will generate more electricity than coal for the entire first six months of 2020—a clear indication that the transition has accelerated.

IT’S WORTH NOTING THAT THESE FIRST-QUARTER RESULTS WERE LARGELY IN THE BOOKS BEFORE THE COVID-19 PANDEMIC began to hit home. Put another way, these results reflect deep and systemic changes in the U.S. electricity market that will continue into the future.

Another persuasive data point is the number of individual days that renewable generation exceeded coal. In 2019, that happened on just five days in the first quarter, and 38 days across the entire year, according to a new database of hourly and daily generation from the Energy Information Administration. This year, renewables have beaten out coal on 47 days—more than all of last year—and what is normally the best period for renewables is only just starting. 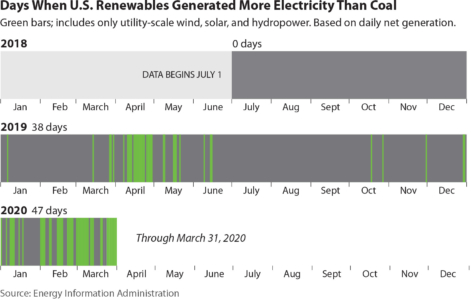 The first-quarter generation numbers highlight a transition that can be seen also in the steady decline in the average capacity factor of coal-fired power plants, a measure of how much of a plant’s potential is actually used. This average has dropped steadily for the past decade, falling from 67% in 2010 to 47.5% in 2019.

So, from being a generation mainstay a decade ago, coal plants are now widely regarded by utilities as marginal resources, dispatched only when necessary.

This change was on full display this past quarter.

Coal plants are now regarded by utilities as marginal resources, dispatched only when necessary

Overall electricity generation was lower during the first three months of 2020 than in the first quarter of 2019, with production dropping from 955.2 million megawatt-hours in Q1 2019 to 920.1 million MWh in Q1 2020—and coal-fired power accounted for all of that decline and then some, dropping by almost 90 million MWh. In contrast, nuclear and renewables remained largely flat year-over-year on a quarterly basis, while gas rose. This suggests coal is being dispatched last now and filling demand as needed instead of generating consistently.

ALREADY THREATENED BY LOW-COST GAS AND NO-FUEL-COST RENEWABLES, coal-fired generation is further disadvantaged by having to spread fixed costs over a smaller pool of MWh, raising prices.

EVEN HAD THIS PAST WINTER BEEN COLDER, COAL MAY NOT HAVE BENEFITED, given the current low market prices for gas.

Utility-sector gas generation was 317 million MWh in the first quarter of 2019 and rose to 347 million MWh in Q1 2020, still well below its potential. During the summer months of 2019, gas generators pumped out 474 million MWh of electricity—which suggests that even had this past winter been colder, a portion of the resulting generation demand would have been met with gas.

The core takeaway from this latest trove of data: Momentum persists even in the age of COVID-19 around the transition from coal.