If the U.S. turns away from the rise of renewable energy, it will be fighting a tide on which others will ride high.

Leading the surge will be China, which already has a huge advantage in its current position at the front of the pack, as IEEFA chronicled last week in a report by Tim Buckley, our director of energy finance studies, and Simon Nichols, an IEEFA energy finance analyst. That report (“China’s Global Renewable Energy Expansion: How the World’s Second-Biggest Economy Is Positioned to Lead the World in Clean-Power Investment”) is a doozy in its detail on where the energy-transition action is, and who’s leading the charge.

China has not only vastly expanded its domestic investment in renewable energy, it is plowing record sums into renewables markets overseas. As our report noted, China put $32 billion into foreign renewables projects in 2016 alone, and last week it said it would increase its bets on renewables by tenfold around the world before the end of 2020. That increased bet is likely to expand China’s renewable-energy employment base beyond its current 3.5 million level. Of note on this point: employment growth in renewables is in sharp contrast to massive worldwide layoffs in the oil, gas and coal industries (more on all that here, here, and here). 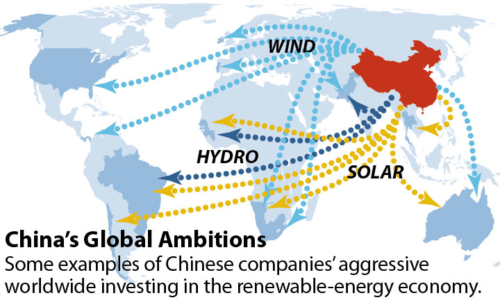 Its domestic renewables push has given China priceless experience ahead of other nations, allowed it to develop leading-edge technology, educated a large, supporting labor force and created financial mechanisms to pay for the expansion. Now China is exporting its renewables juggernaut, taking stakes in projects of note elsewhere in Asia and in Africa, Europe, India, North America and South America (the map here includes a few of the many examples of Chinese investments in renewables).

We think the global boom in renewables will last for decades, driven not just by Chinese investment but by other emerging economies—and by industrialized ones as well. Growth in solar, wind and energy-efficiency initiatives are steadily reducing the costs of production and making renewable energy cheaper than traditional sources. Public pressure to combat pollution and build collective action on global climate change is growing. These are huge combined market forces that as we speak are shaping how electricity production, especially, is being reimagined.

In the fast-moving renewables revolution, economies as diverse as those of Bangladesh, Brazil, Chile, Indonesia, Kosovo, Mexico, the Philippines, Puerto Rico, and South Africa now have the means to foster prosperity without imposing harsh consequences on public health and the environment.

Meantime in the U.S., national energy-policy discussions are drifting the other way as an evidently over-the-hill gang takes power in Washington with hopes of going back in time to when companies like Exxon mattered more than they do now and when economic growth was driven by fossil-fuel consumption.

Those days are done, though, and so are the days when solar- and wind-powered energy were dismissed by skeptics as sci-fi experiments or “alternative” sources to traditional fossil-fuel generation.

There’s no turning the clock back. Clean energy has gone mainstream.

IEEFA Energy Swamp Watch: An Oil-Industry Bailout Is in the Works in Washington

IEEFA Alert: Peabody’s Plan to Emerge From Bankruptcy Is Likely to End in Bankruptcy Again