This has been a remarkable year in energy markets across the U.S. and around the world. Change has unfolded fast, and dramatically. The coal industry is in deep structural decline in 2015, oil and gas prices have plunged, the cost of renewable energy has dropped, and China and India—the most populous countries in the world—are making energy-policy choices today they might not have considered a year or two ago, driven by crippling air pollution from coal-fired power. 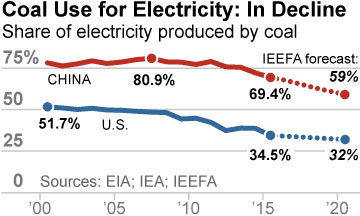 IEEFA documented many of these market-shifting trends in our year-end report, “Carpe Diem: Eight Signs that Now Is the Time to Invest in the Global Energy Market Transformation,” but that’s not the half of it. We see much more on the horizon. The global emissions-control pact signed in Paris was in part made possible by these changing market forces.

Change doesn’t always come easy, though, and energy markets have long proven especially resistant to transformation. Entrenched interests are threatened by the rise of renewables, and many technological challenges remain. Public-policy battles loom. Much is needed still in the way of innovation that can help communities and workers most affected by fast-moving markets.

Utilities everywhere face important choices on what energy sources to develop and which electricity-delivery systems to support. Regulators are tasked perhaps more than ever with protecting ratepayers from long-term fossil-fuel subsidies. Influencers of all stripes—pension-fund managers, investment bankers, rule-makers, legislators, and elected officials—are presented with previously unheard-of opportunities to support renewable power and energy efficiency.

In our mission to accelerate the transition to the new energy economy, IEEFA specializes in financial and economic analysis that sheds light on energy-market activity around the world. Our work occurs on the front lines. Our research in 2015 informed and influenced debate and decision-making across the U.S.

We also tracked the collapse of the U.S. coal industry in 2015, a year in which coal producers lost 76 of their share value and coal companies suffered deep financial distress—bankruptcy in some cases. Our work in this realm raised questions that responsible policymakers today are beginning to answer.

IEEFA has taken the lead in 2015, too, on research that supports choices that can help solve energy poverty in several developing nations. Our work this year in Asia and Europe has offered several guideposts that help show the way.

As we ring in 2016—sure to be another watershed year—IEEFA aims to expand its work across the new energy economy, where transition is gaining momentum and where the possibilities are vast.

More change is on the way.