Emblematic of a Sector in Distress, Homer City Power Station in West Pennsylvania Is on the Ropes 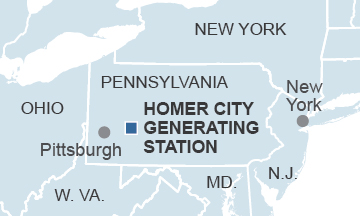 Now, on the heels of a weak end-of-year 2015 financial report, GE has indicated that the plant is in default on its debt payment and likely to file for Chapter 11—again. GE (and MetLife, the other brand-name stakeholder in the project) stands to lose upward of $2 billion in equity, while repayment of a $600 million retrofit investment is at risk too.

So GE is looking to get out.

The reasons for the failure of this merchant generation plant are not unlike the reasons for the failure of the merchant coal-fired electricity generation sector nationally. Falling natural gas prices have driven electricity prices down so far that plants like Homer are simply not performing financially. The Homer plant’s capacity factor in 2015 was only 55 percent. Revenues were down dramatically, and the plant could not make the annual interest payment on its bonds, let alone deliver any kind of return on equity.

At the root of its problem is that the electricity capacity market—which is the lifeblood of merchant generators and was considered a vital part of Homer’s 2012 recovery plan—never materialized in a way that could keep the plant solvent.

It’s unclear now whether a new buyer will be found for the plant. When the plant went bankrupt the first time, Edison said it was worth nothing. And while GE evidently thought otherwise, the most recent audit, by KPMG, notes that the Homer plant is running on negative cash flow, unable to cover operating expenses.

Any new owner—should one be found—would have to remake the capital structure of the plant, a tall order in a time in which investors in such assets are hard if not impossible to come by.

We note also here that since 2012 the price of Northern Appalachian coal—which is what the Homer plant burns—has dropped by 20 to 30 percent. Even with this sizeable cost savings, the plant remained insolvent.

WHAT HAPPENS TO THE HOMER CITY PLANT AFFECTS MORE THAN ITS OWNERS, ITS INVESTORS AND ITS WORKERS, AND SUGGESTS A PARTICULARLY WORRISOME FUTURE FOR SURROUNDING COAL-MINING COMMUNITIES. Homer City Generation Station historically has bought its coal from several local mines. The largest of those sellers, Rosebud Mining Co., will take a huge hit if the plant closes. In 2015 (a year of steep decline in coal purchases by the plant) almost half of Rosebud’s 3.9 tons of annual production went to the Homer plant.

So while the hour is late for this plant, the same is true for the mines that supply it.

As GE tries to find another operator, the State of Pennsylvania, the federal government, mine owners, utilities and local communities can and should move now to forge a plan to support mine and plant workers in a time of transition. This is an opportunity for real, forward-looking investment in the region. We note that GE Capital holds an interest in 14 energy projects nationally, 12 of which produce wind- and solar-powered electricity. And of course the broader GE family of businesses has global reach.

We were amazed in 2012 that GE would invest in a coal plant. The company’s CEO, Jeff Immelt, had clearly expressed frustration with the coal industry for failing to turn into the force for innovation that it could’ve become. [1] To Immelt, coal was the poster child for backward technology, a point sadly proven now by the Homer City plant, which serves as a snapshot of how competitors have run circles around an overleveraged business with a weak revenue base.

There are some hard lessons to take from this bankruptcy, this time.