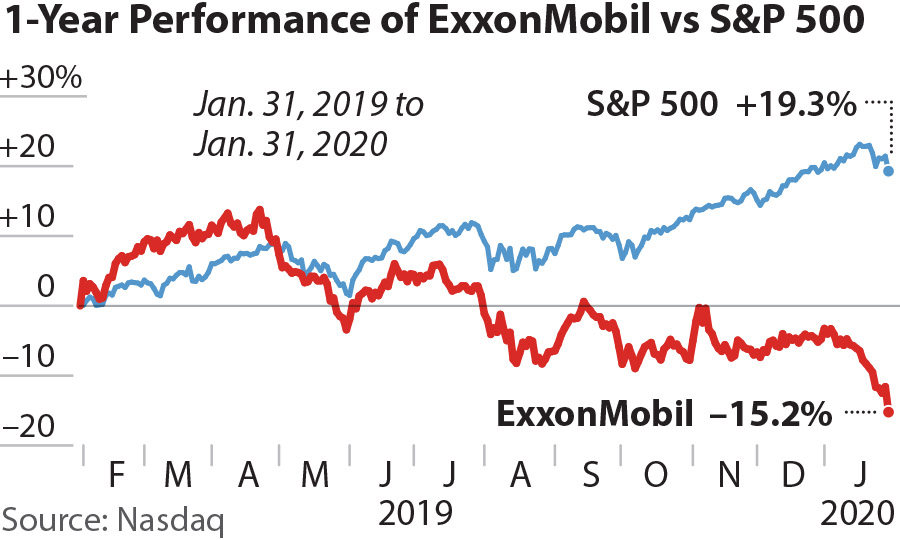 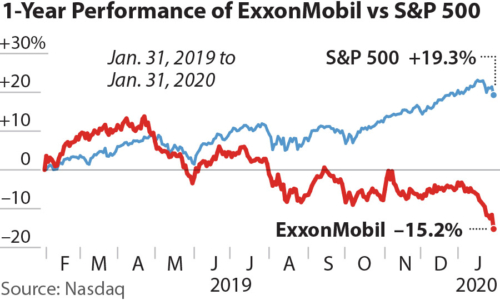 In the current rocky terrain facing the oil and gas industry, the one thing that keeps investors tethered to companies like ExxonMobil is its quarterly dividend checks. ExxonMobil has raised its dividend to shareholders for 37 consecutive years. In its announcement today of its 2019 financial performance, ExxonMobil did it again.

But dividend payments in 2019 were not covered by ExxonMobil’s free cash flows. In fact, the company’s deteriorating financial condition required it to cover 64% of the dividends in 2019 with funds from asset sales and borrowing, a sharp increase from its 10-year average of 30%.

During 2019, the company’s revenues underperformed across all of its core sectors (excluding asset sales). Company officials announced in 2019 they were abandoning their plan outlined in 2017 to secure quick cash from the Permian Basin, reflecting slower than anticipated progress in an area that has seen above-average capital commitment. In 2019, ExxonMobil secured nearly $4 billion in asset sales and took in $8.1 billion in debt and other financing.

At the beginning of 2020, ExxonMobil’s share price approached a new 52-week low

The company’s stock performance during 2019 was flat and the market overall rose by 29.8%. The company fell out of the top ten of the Standard & Poor’s 500 index during the year. And, throughout January 2020, Exxon’s stock approached a new 52-week low.

As ExxonMobil and the energy sector more broadly faces a downward trajectory, its core claims of strength are receiving greater scrutiny. The method used to finance its ever increasing dividend comes not from the company’s actual core operations and oil and gas reserves but from its financial reserves. It is a dividend that requires crutches. The company continues to bring new reserves to market at the wrong time and wrong price.

If, as the company has recently stated, its future cash flows will be infused with more asset sales and borrowings, then this too serves as a notification to investors. The company acknowledges that annual revenues will not be covering annual costs of operations, reinvestment and profit for some time to come. We can expect ExxonMobil to stay around but as a far smaller financial and production player.