IEEFA: Over US$50 billion in gas power projects and LNG import facilities at risk of cancellation in Bangladesh, Pakistan and Vietnam 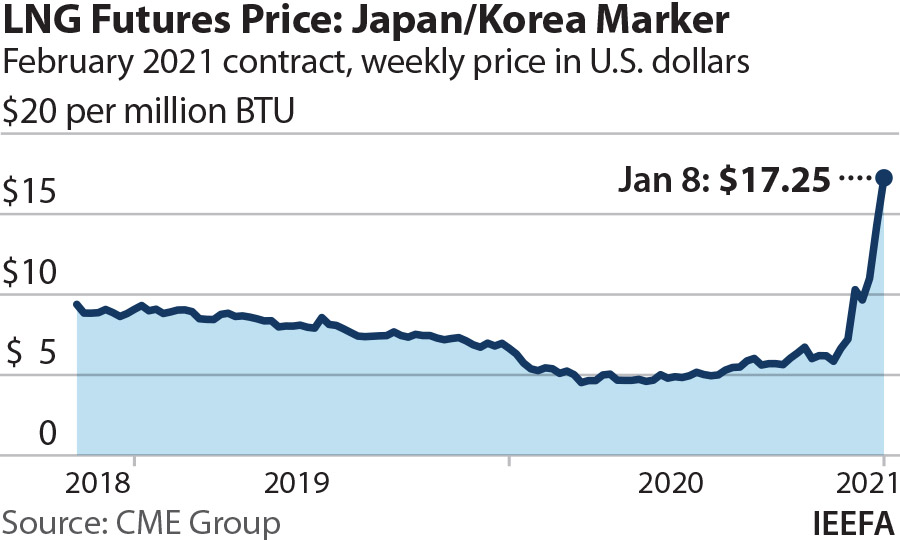 14 January 2020 (IEEFA): Emerging markets such as Vietnam, Pakistan and Bangladesh that are turning to liquefied natural gas (LNG) as a source of power are likely to be hit by higher and more volatile prices going forward, according to a new briefing note from the Institute for Energy Economics and Financial Analysis (IEEFA).

“Asian LNG spot prices have soared to a new high on the back of stronger than expected seasonal demand for heating as freezing weather grips large parts of the northern hemisphere,” says Robertson.

“Interruptions to supply in Malaysia, Australia and the U.S., three of the world’s largest LNG exporters, and higher freight rates have also affected prices.”

The average LNG price for the February 2021 delivery into northeast Asia is estimated to be around $21.45 per million British thermal units (mmBtu), according to pricing agency S&P Global Platts, up 47% from the previous week ($14.60 (source Reuters).

A recent spot LNG cargo out of the Gorgon project in Western Australia was sold at “an incredible price of about $US37 per million British thermal units, more than 18 times higher than the price about six months ago” according to the Australian Financial Review.

Robertson points out that recent spot price volatility has led to tenders being cancelled by Bangladesh and Pakistan.

“Emerging markets are particularly price sensitive and will find the forthcoming gas price environment challenging, as we have already seen in Bangladesh and Pakistan.

“Higher and volatile LNG prices will make operating LNG-powered generation plants more costly and unpredictable. This may lead to the underutilisation of LNG plants and rising gas and electricity tariffs for customers.”

According to Robertson, the recent spot price rise may be a precursor to higher and more volatile gas prices in the future, with less affordable contract prices a likely outcome.

“While contract gas prices have been low and relatively stable in recent years, this is unlikely to last,” says Robertson.

“With lower levels of drilling, financial instability in the oil and gas industry, and low levels of industry investment, it is likely that a new era of higher prices and more volatility is upon us.”

Robertson says the oil price, on which a lot of gas contracts are based, has been very low for a considerable length of time. If the global economy does bounce back from the COVID-19 crisis there could be considerably higher gas contract prices out of Australia, Qatar and the other big exporters.

“Prices on the Henry Hub gas exchange, the U.S. gas price benchmark, are about to be unsettled by a combination of oil and gas bankruptcies, the poor financial state of oil and gas companies, and a lack of drilling in the U.S.

“We may be coming to the end of an era of stable gas prices and the effects of this will reverberate globally as the U.S. is now a major exporter.”

Robertson says for Asian power utilities, this could mean the prospect of underutilisation of their LNG generation plants in the coming year.

“The emerging markets of Vietnam, Pakistan and Bangladesh have over US$50 billion of proposed gas-fired power projects at risk of cancellation from unaffordable LNG prices. The extreme volatility of spot prices combined with the increasing volatility of contract prices will see many projects become unbankable.

“In the end, this uncertainty will flow through to electricity customers who will be looking at the possibility of rising tariffs.

“Asian countries should be looking to deflationary renewable energy as a cheaper, more predictable alternative resource to LNG.”

Read the report: Gas and LNG Price Volatility to Increase in 2021 – Buyer Beware