IEEFA: For India’s ‘RE+’ goals, capital is key 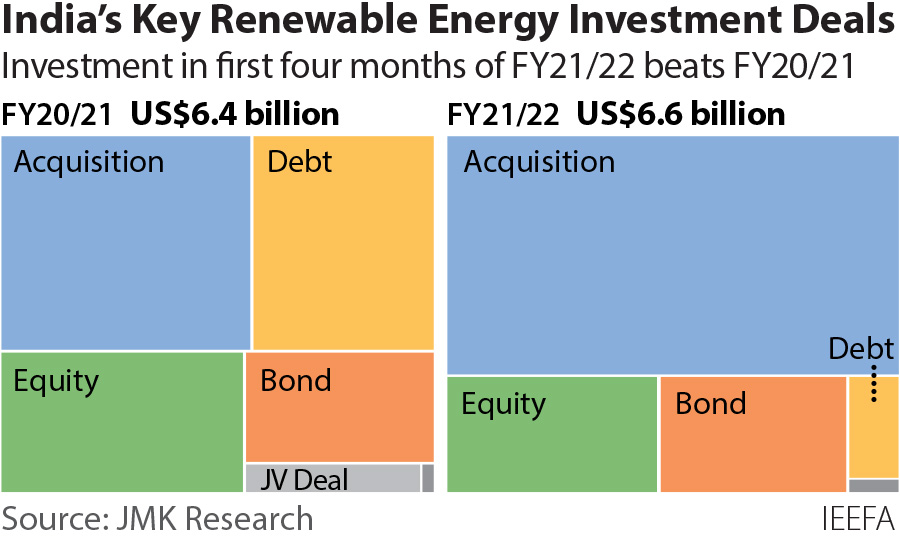 The electricity transition is happening – but not fast enough to limit the global average temperature rising by 1.50C.  To realise India’s ‘RE+’ goals and to help the world achieve the Paris Agreement aims, power investment will need to increase.

Compared with average annual investments projected in the International Energy Agency’s (IEA) Sustainable Development Scenario, global power sector spending in 2019 was about 35% short of the level required a decade from now. In 2020, there was also lower investment due to the COVID-19 pandemic.

To address climate change and greenhouse gas emissions, India committed to reaching 175 gigawatts (GW) of renewable energy (RE) capacity by 2022, and it has increased the target to 450GW by 2030. It ranks fourth in the world in terms of installed RE capacity with 100.6GW as of August 2021.

After a COVID-induced slump, the pace of RE investment has picked up again in this financial year

India has made tremendous progress but it will need to deploy US$500bn in investment to reach its 450GW capacity target by 2030 (US$300bn for wind and solar infrastructure, US$50bn for grid firming investments and US$150bn on expanding and modernising transmission).

Financing will play a critical role in achieving India’s ‘RE+’ goals. More than Rs5.2lakh crore (US$70bn) has been invested in India’s RE sector since 2014. After a COVID-induced slump, the pace of RE investment has picked up again in this financial year (FY).

Investment in RE in India declined by 24% in FY2020/21, dropping from US$8.4bn in FY2019/20 to US$6.4bn in FY2020/21. However, with the revival of energy demand and commitments from various banks and financial institutions to exit fossil fuel investments, the share of RE investment is rising. Until recently, renewable energy investment in India was driven by private sector banks but public sector banks  increasingly are lending to the RE sector. State Bank of India’s (SBI) lending to RE projects has increased to Rs319bn (US$4.2bn) or 1.5% of the bank’s gross loan assets.

SBI’s pivoting lending focus, with more funding going to RE compared to coal power projects in the last financial year, comes as the banking sector is struggling with US$40-60bn of nonperforming or stranded coal assets. Moreover, lending agencies and fossil fuel companies face increasing pressure from their boards to change strategy and diversify their portfolios towards RE.

A review of the two-year share price performance of Peabody Energy and ExxonMobil shows that the fossil fuel giants have massively underperformed their respective share market benchmarks. ExxonMobil destroyed US$150bn, or more than 50% of its shareholder wealth, to October 2020 and the loss in value could be much higher now.

With the share prices of such companies hitting the floor, board members are having to evaluate their strategies and reduce risk in their investments by exiting fossil fuel financing. These decisions are made purely on an economic basis – these companies are profit-making entities and want to earn higher returns on their investment.

Further, renewable energy is deflationary, with falling prices helping to drive global capital into the RE sector and away from thermal coal and coal-fired power generation.

To date, IEEFA has tracked more than 180 globally significant banks, insurers, and asset managers/owners that have implemented substantial formal coal policies since 2013.

This is a reflection of the rapidly diminishing economic merits of thermal coal and the growing understanding that alignment with the Paris Agreement invariably leaves many coal projects as stranded assets, unable to deliver a viable return over their useful life.

An acceleration of the trend of global capital shifting to RE would allow India to decarbonize its energy sector and channel investment towards a green recovery to build a more sustainable economy.

India is already witnessing increased commitment to RE investment by domestic and global players. In June this year, Mukesh Ambani, chairman of Reliance Industries, announced plans to invest Rs75,000 crore (US$10bn) into clean energy over the next three years in support of the group’s ambitious pledge of world net-zero emissions by 2035. JSW Energy also plans to scale up its total capacity to 20GW with a total investment of Rs75,000 crore (US$10bn) by 2029/30 from a little over 4.5GW now, driven by renewable energy.

Such clean energy commitments by Reliance, JSW Energy and similar major players will drive more investment into this space. Other public and private entities including NTPC, Tata Power and ReNew Power have also made large commitments.

India has a long road ahead. The task is daunting. But the financial trends in Indian renewable energy and grid infrastructure over the past two to three years strongly suggest domestic and global capital can support this ambition.

India needs to strengthen its green industrial policy by investing in capacity to manufacture for the clean energy transition. It also needs to start investing in the electricity distribution system of tomorrow, instead of merely trying to fix the existing system’s problems.

The country should adopt an ‘RE+’ approach, which means bringing in new technology and unlocking finance not only for the solar and wind sectors, which are competitive on their own, but also for other flexible sources of generation such as battery storage, pumped hydro, green hydrogen and electric vehicles. The government must now work on resolving policy and legacy issues to encourage financial institutions to deploy more capital to support RE+ goals.

Vibhuti Garg is an energy economist and Lead India at IEEFA

IEEFA India: Why prices skyrocketed at the power exchange