Solar and battery storage adoption is enjoying almost exponential growth, and wind and solar technology improvements have helped turn the two resources into the least-cost option across the United States.

The scope and speed of the transition away from fossil fuels, particularly coal, has been building for the past decade. That transition, driven by the increasing adoption of renewable energy and battery storage, is now nearing exponential growth, particularly for solar. The impact in the next two to three years is going to be transformative.

In recognition of this growth, IEEFA’s 2021 outlook has been expanded to include separate sections covering wind and solar, battery storage, coal, and gas— interrelated segments of the power generation sector that are marked by vastly different trajectories:

This year’s outlook also includes a section on the significant expansion in power sector applications of battery storage. Little more than a demonstration-scale technology four years ago, utility scale storage installations topped the 1 gigawatt mark this year and are pegged to jump to almost 6 GW annually by 2025. These developments, currently largely using four-hour duration lithium batteries, give utilities the ability to store wind and solar generation when it is not needed and use it during periods of peak demand. As one utility executive has described it, this enables “solar after sunset.” IEEFA expects the coming surge in battery storage deployment to further undercut the economics of both coal and gas-fired generation, speeding future fossil retirements.

On top of these market-driven changes, it is clear the new Biden administration is going to take a much more aggressive policy approach over the next four years to quickly push the U.S. electricity sector to be less carbon-intensive. In her first speech, Energy Secretary Jennifer Granholm said: “The Department of Energy is one of our government’s most fighting forces as we pursue the goal of a carbon-pollution free country. We have to add hundreds of gigawatts to the grid over the next four years. It’s a huge amount. And there’s so little time.”

The Energy Information Administration expects a slight upward bounce in coal generation in 2021 due to higher gas prices, but even if that does happen, IEEFA’s analysis indicates that it will be a short-lived reprieve, with coal’s downward trajectory resuming toward the end of the year or early in 2022. We projected last year that coal’s share of the U.S. generation sector could drop to 10% by 2025; that scenario still appears realistic.

Longer term, coal will be pushed out of the electricity sector completely, with gas set to decline as well. Cleaner and lower-cost wind and solar, coupled with battery storage, will drive fossil fuels out of the market. Furthermore, the high levels of investment pouring into research and innovations in storage and hydrogen suggest that the competitive pressure on fossil fuels will only increase. 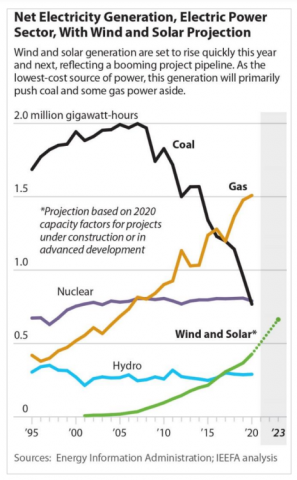