The UK government’s decision to approve the Cumbria coal mine comes as new low-carbon steel investments in Europe accelerate with government support.

Little of the new coal will be used by UK steelmakers, who are making it clear they want government support to transition away from coal in order to remain competitive.

If the UK government wants to maintain a domestic primary steelmaking capacity, it will need to provide financial support to the major producers to transition, undermining the rationale for the mine’s approval.

The UK government’s decision to approve a new coking coal mine in Cumbria comes at the end of a year that has seen the European steel technology transition away from coal accelerate.

The decision to approve the Cumbria coal mine comes as the UK steel sector calls for government support to transition to low-carbon technology to remain competitive.

In November 2022, the International Energy Agency stated that “hydrogen-based steelmaking has picked up significant momentum”, noting the tripling of the number of steelmakers’ announcements to use such technology over the prior 12 months.

Major steelmakers are starting to make clear that coking coal used in blast furnaces has a diminishing future.

The timing of the decision, announced shortly after the COP27 climate conference in Egypt, is out of touch with the direction the European steel industry is heading and comes as the UK steel sector calls for government support to transition to low-carbon technology in a bid to remain competitive.

The second half of 2022 has seen a number of steelmakers move from green steel announcements and pilot projects towards commercial-scale investment decisions and construction that will see new, low-carbon installations operational in just 3-4 years and ready to use green hydrogen to reduce emissions further. 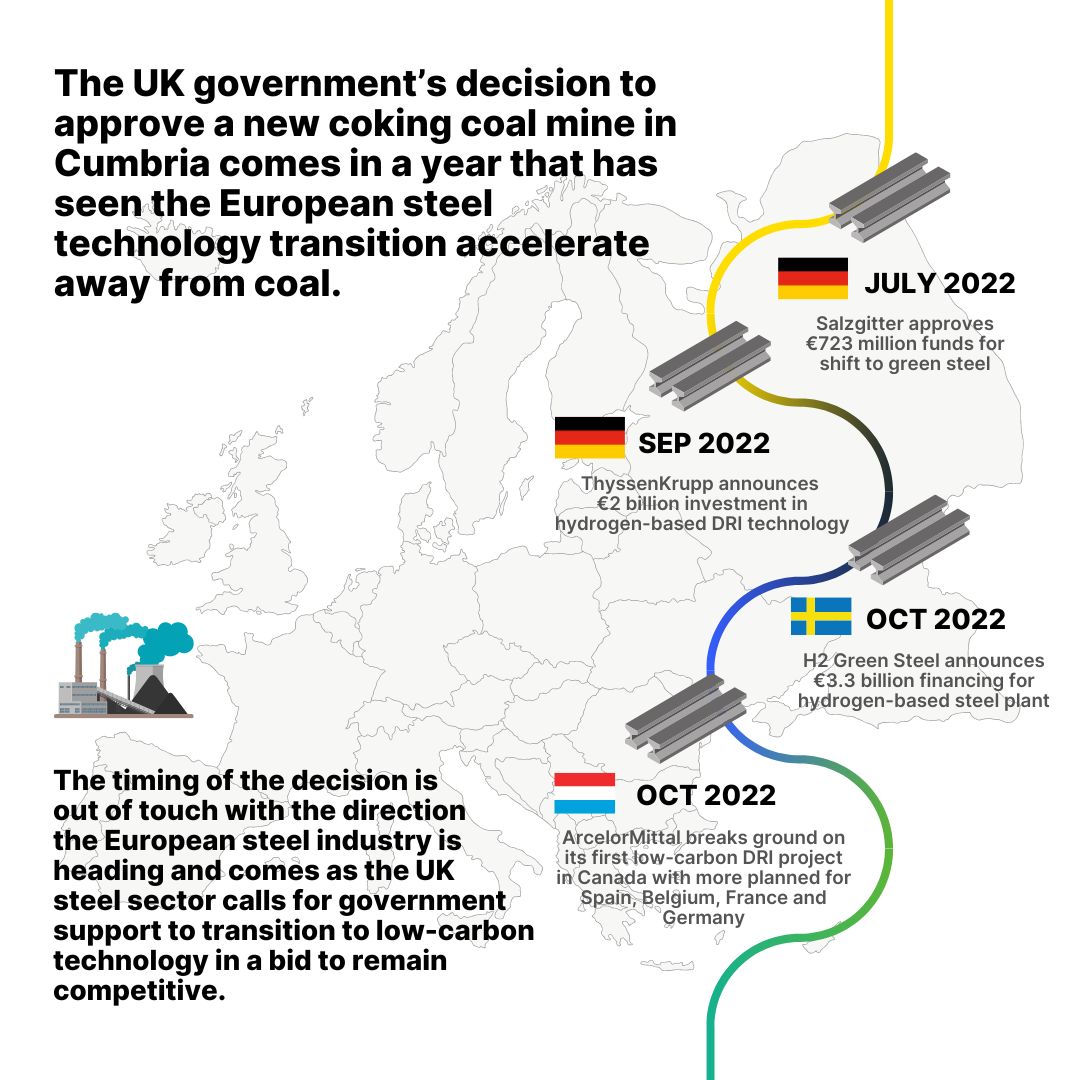 In September 2022, ThyssenKrupp announced a €2 billion investment in its ambitious decarbonisation plan to replace the first of four blast furnaces using hydrogen-based direct reduced iron (DRI) technology. The first new DRI plant is intended to start its 2.5 million tonnes per annum (Mtpa) production by 2026. The three remaining blast furnaces will then be replaced progressively.

This followed board approval for Salzgitter’s shift from blast furnaces to low-carbon DRI processes in July 2022. Both the Salzgitter and ThyssenKrupp projects are subject to public funding.

Europe’s largest steelmaker has a number of projects under development that are receiving government support and will use green hydrogen not coking coal.

Europe’s largest steelmaker, ArcelorMittal, has a number of DRI projects under development that are receiving government support and will use green hydrogen not coking coal. In October 2022, the company broke ground on its US$1.3 billion transition to DRI-based steelmaking in Ontario, Canada. As with other new DRI developments, the plant will initially use natural gas but will be built ready to transition to green hydrogen.

The Ontario and Canadian governments have committed C$500 million (US$375 million) and C$400 million (US$300 million), respectively, in public support for the 2.5Mtpa project.

Also in October, Swedish steel venture H2 Green Steel announced that a number of leading European financial institutions have committed to providing billions in financing for the construction of its hydrogen-based steel plant in northern Sweden.

In addition to €3.3 billion in senior debt from a consortium of banks the project was also supported by a €0.75 billion senior loan from the European Investment Bank. The greenfield project with an annual capacity of 2.5 million tonnes is planned to commence by 2025 and double its capacity by 2030.

As well as steelmakers, miners in Australia – by far the world’s largest exporter of coking coal – have also started to signal the future direction of the sector in 2022. BHP, the biggest of Australia’s coking coal exporters, has maintained that demand for coking coal will continue for decades but is now beginning to acknowledge that hydrogen could replace coal in the face of the acceleration in the technology transition this year.

Of particular note is that BHP CEO Mike Henry stated in November 2022 that the company currently has no “growth capital” allocated to coking coal.

South32, another major Australian coking coal exporter, also made clear in 2022 that it won’t be investing in any more coking coal projects and will wind down its coal business as existing mines are depleted. The company will instead focus on “metals critical to a low carbon future”.

UK steelmakers ask for government support to transition away from coal

As European steelmakers accelerate their shift away from coal assisted by public funding, the UK sector is highlighting the need for government support for their own transition to low-carbon processes. Such a transition will be vital for the UK steel industry to remain competitive.

As European steelmakers shift away from coal assisted by public funding, the UK sector is highlighting the need for government support for their own transition to low-carbon processes.

Tata Steel UK has warned that it needs government support to transition to low-carbon steelmaking and Jingye-owned British Steel has also made clear that its coal-consuming blast furnace operations are unlikely to be viable without government aid.

The Climate Change Committee – independent advisor to the UK government – has said the UK steel industry must be “near zero” emissions by 2035 if the government’s 2050 net zero emissions target is to be met.

UK steel production is on course for a record low in 2022 and the country faces the prospect of becoming the only major economy without the capacity to produce primary steel if Tata and British Steel are forced to shut down operations.

If the UK government wants to avoid this, it will likely need to provide financial support to steelmakers to help them transition away from coal in order to remain viable in a carbon-constrained future.

It already seems clear that little of the coal from the new Cumbria mine will be used by the UK steel industry. But if the government moves to support the steel sector’s transition away from coal – as Europe is already doing – then approval for the new coal mine makes even less sense.