Slovenians, in Their Rebuke of a Misbegotten Power Plant, Put U.S. Elected Officials to Shame

The expensive and poorly performing Prairie State Energy Campus coal-fired power
plant in southern Illinois cost more than $1 billion more to build than participating communities around the Midwest were told when they entered into long-term contracts to buy its electricity.

Although there is evidence that these communities were misled by Peabody Energy and Prairie State’s other owners, very few elected officials have called for public investigations of Prairies State’s cost overruns and poor operating record. Instead, most have opted to allow the extremely high cost of Prairie State power to be passed along to their communities and businesses. This shamefully passive behavior contrasts starkly with recent government actions of the government and legislators in Slovenia. 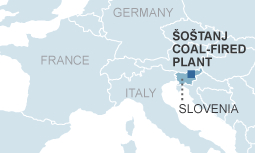 The recently coal-fired constructed Sostanj 6 is tagged as a “Monument to Slovenian Corruption” and a “Showcase of Catastrophic Corporate Governance,” for a history that reads like the plot of a financial thriller. It includes corporate corruption and fraud as well as political indifference to the risks of rising plant costs. Sostanj 6 has sparked a legislative inquiry, a governmental audit and, ultimately, criminal charges.

Pitched two years ago as a project that would cost 600 million euros, the plant’s construction costs had mushroomed to approximately 1.43 billion euros by 2014. Why such overruns? Perhaps—as the chairman of HSE, the state-owned company that owns Sostanj, has admitted—because the public was misled about Sostanj’s likely true costs even though the 1.4 billion euro price tag was known long before 2014.

A RECENT REVIEW OF THE PROJECT BY SLOVENIA’S COURT OF AUDIT FOUND THAT THE BADLY-MANAGED PROJECT TODAY POSES A SIGNIFICANT FINANCIAL RISK TO ITS OWNER—TO SAY NOTHING OF THE RISK IT PUTS ON THE BACK OF TAXPAYERS—and that such outcomes were known all along. According to published reports, the audit found a chain of deliberately misleading official assertions and doctoring of data (the court of audit was spurred to conduct the review because of questions about why the state had pushed forward with a 400 million Euro state guarantee).

investigations, too. In October 2014, the authorities filed criminal charges related to a scheme in which Alstom, the French supplier of the plant, was alleged to have made 166 million euros. Those charges against eight Slovenians and two foreigners include abuse of office and destruction of documents.

In late 2014, to its credit, the Slovenian parliament—at the initiative of the opposition United Left Party—voted to initiate an inquiry into how it was that the project gained the support of officials who were supposed to protect the public interest. One of the sponsors of that inquiry said it would seek political culpability and that it would examine the actions of legislators who approved the sate guarantee.

Sostanj 6’s steep price tag means that— like the Prairie State Energy Campus — it is a bad deal for consumers even if the plant has good operating performance. The very high fixed cost of these plants leads to very high-priced electricity, at a time when consumers ought to be benefiting instead from record low electricity prices.