July was a record-setting month in ERCOT, the system operator that handles roughly 90% of Texas’ electric demand. Searing heat drove electricity demand to a new monthly record, with generation climbing to 45.97 million megawatt-hours (MWh)—well above the previous record set just the month before, and the first time generation topped the 45 million MWh mark. It was also a record-setting month for solar, with generation climbing to 2.99 million MWh—up 60 percent from July 2021 and four times the 2019 total.

The pairing is important, as the continued buildout of ERCOT’s solar resources offers both an option for meeting growing demand in general, while providing reliable and predictable power during the system’s peak demand hour. During the month, solar met 10% or more of demand at the peak hour on 25 of the 31 days. On four other days solar was above 9.6% of total demand at the peak hour.

In other words: Reliable and predictable. 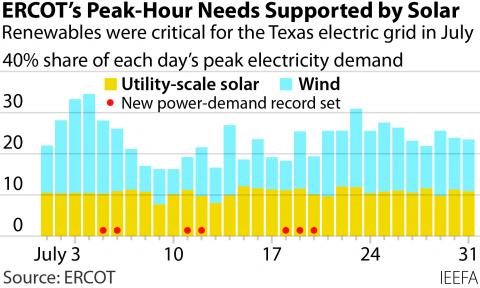 The answer to Texas’ concerns about aging fossil fuel generation, especially gas-fired combustion turbines that generally do not operate often but are expensive and polluting when they do, is to build more solar generation.

When it is hot—really hot—in Texas, that means the sun is shining and solar generation will sparkle, too.

According to ERCOT data, there are 12,340 megawatts (MW) of solar capacity synchronized with the grid. On average, that capacity generated 8,055MW of electricity during the peak hour in July. If that capacity was doubled, it is reasonable to assume that peak output would double to more than 16,000MW. Assuming the new generation could be shipped to the state’s principal load centers from Dallas south to Houston,  peak solar contribution would be pushed to more than 20% and significantly ease the burden on the state’s thermal generation resources.

This would require additional transmission infrastructure, but such an investment would also enable additional wind generation for the system’s grid, both on and off peak, further reducing the demand for polluting fossil fuel-fired generation.

And contrary to conventional wisdom, the wind does blow in Texas in the summer, even on the hottest days. The average high temperature in Dallas for the month was 102.4°, with the high only dipping below 100° on four days while hitting 105° or higher on seven days. Still, wind generated an average of just under 10,000MW at the peak hour. Wind is more variable than solar, but it still provided 10% or more of peak demand on 21 of the 31 days in July.

Even looking at the peak of the peak days of July 18, 19, and 20 when ERCOT set three consecutive generation records, wind and solar still met 18%, 25% and 19% percent of demand during the peak hour.

That is a fact to plan around. Texas should be encouraging the continued buildout of non-polluting, fuel-cost-free wind and solar to keep costs down for residents across the state and lessen the burden on its aging thermal generators. 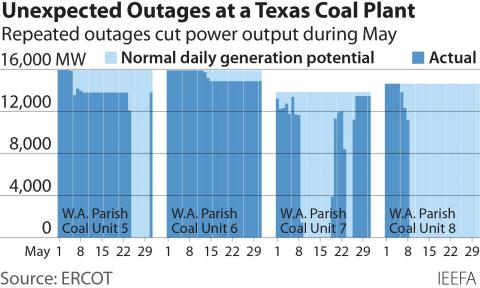 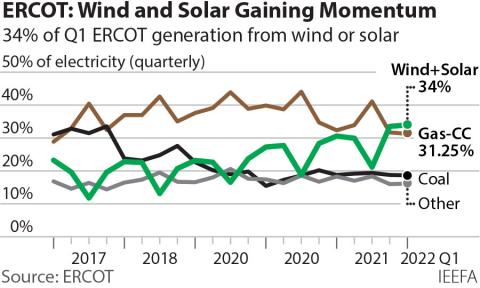