Fossil fuel proponents consistently argue that renewables are too intermittent to maintain grid reliability, and that wind and solar generation is replacing “dispatchable” coal and gas, claiming these resources are always available when needed. But May’s early season heat wave in Texas showed just the opposite: Renewables were reliably predictable throughout the 10-plus day event, while fossil fuel power plants experienced a raft of unexpected outages that prompted warnings from the state’s power-system operator. It is a lesson that should help change the narrative regarding generation resources across the country.

The event began May 3, when the Electric Reliability Council of Texas (ERCOT), the company responsible for running the electricity market in most of Texas, warned that the state could see record-setting demand over the Mother’s Day weekend (May 7-8) due to extremely high temperatures, and that planned maintenance at a number of thermal generating facilities could cut into supplies. Fossil-fuel and nuclear plants usually schedule maintenance and refueling in the spring and fall when power demand is lower, and a heat wave so early in the year was unexpected—although climate change likely will make such events increasingly common. 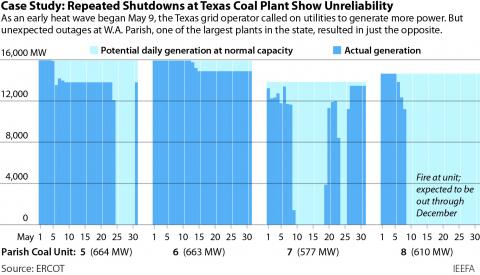 As part of its preparations, ERCOT said it was asking generators with planned maintenance outages to delay them, and for those currently offline to return to service if possible. As ERCOT found out, you can ask, but that doesn’t mean the fossil plants can deliver.

The first problem arose late Sunday, May 8 when a fire broke out at Unit 8 of the 3,677-megawatt (MW) W.A. Parish Plant southwest of Houston, one of the largest power stations in Texas. The eight-unit plant includes four gas-fired boilers (1-4) and four coal-fired boilers (5-8). Capacity at Unit 8 totals 610MW; it is the youngest of the units at the plant, having entered commercial service at the end of 1982.

NRG, the company that owns the Parish facility initially told ERCOT that the unit would be offline through the end of May. However, information in ERCOT’s forced outage database indicates that the unit could be out of service through December. And at least one outside expert, University of Houston Energy Fellow Ed Hirs, says the unit may not return to service at all. “It will depend on the damage, but honestly, as a unit, it probably doesn’t make economic sense.”

Then, early on May 9, a second unit at Parish, Unit 7, with a generating capacity of 577MW, was forced offline. It is unclear if that outage is related to the fire at Unit 8; initially, NRG attributed the problem to a lack of coal and expected the unit to return to service in short order. Instead, it remained offline until May 19. In all, three of the four coal units at Parish were unexpectedly shut down for days-long stretches during May, with Unit 5 shut down completely May 25-30.

Beyond Parish, two other large coal units in ERCOT were offline during the heat wave event. Sandy Creek, a single unit 933MW facility largely owned by LS Power, a privately held power plant developer, was taken offline in early March with a scheduled return to service on May 14. Given the length of the outage and the timing, this likely was planned maintenance; still, the rationale given for the outage in ERCOT’s database is an “unavoidable extension”, which is defined by the grid operator as occurring “when a planned or maintenance outage is not completed within the submitted timeframe and a generation resource is in such a condition that they are forced to extend the outage.”

Unit 1 at Vistra’s three-unit Martin Lake generating plant was also offline during the heat wave. As with Sandy Creek, this 800MW unit was taken offline in mid-April and scheduled to return to service at the end of May. It too likely was offline for regular maintenance, but the reason given to ERCOT for the outage was an unavoidable extension, raising some doubt about the exact reasons for the plant’s unavailability.

So, as ERCOT began preparing for the early season heat wave, it was without almost 20% of its installed, supposedly dispatchable coal-fired generation.

You can ask, but that doesn’t mean the fossil plants can deliver

ERCOT was also without one of the two units at the Comanche Peak nuclear station as the heat wave began. Unit 1, with 1,205MW of generating capacity, had been taken offline in mid-April for overhaul work and was not scheduled to resume operation until May 15, after the end of ERCOT’s initial warning period.

On Monday, May 9, just after the two Parish units went down, the Texas grid was tested. Peak demand topped 70,000 MW, easily surpassing the previous May peak record of roughly 67,000 MW. At the peak hour, wind and solar generation provided 37.8% of the total power supply in ERCOT. For seven straight hours during the day, including through the peak hour at 5 PM, ERCOT’s solar generators alone fed more power into the grid than the region’s coal plants. At the peak hour, solar generators produced 7,332MW compared to 7,039 MW for coal, a clear indication of the system’s changing dynamics.

Then on Friday, May 13, six gas-fired power plants with a combined generating capacity of more than 2,900MW tripped offline in the late morning and early afternoon, forcing ERCOT officials to appeal to residents to reduce their electricity consumption.

First, already hobbled by the four offline coal units, the state’s other coal generators were unable to respond to the grid’s need for additional generation. During the peak hour, ERCOT’s coal generators produced 7,483MW—only about 63% of their potential capacity, assuming that roughly 11,783MW of coal-fired capacity was online and available to generate power. Since system officials were openly asking for additional generation, the coal plants’ unresponsiveness raises questions. Were the plants not capable of raising their output? How reliable will they be as the summer heat intensifies and demand rises in the coming months?

The second problem has to do with maintenance, a crucial need for fossil fuel plants but one that is being forced into an ever-shrinking window between the cold snaps of January and February and early heat waves in May, both with potentially high electricity demand. ERCOT’s principal maintenance months are April and May, but system operators were forced to ask (and apparently order, in a couple of cases) plants to delay planned maintenance outages when this year’s early May heat wave arrived. It didn’t go as expected, though: the Texas Tribune reported that several of the affected gas plants tripped offline on May 13, anyway.

Another way of looking at the unpredictability of the ERCOT gas generators can is evident in the swings in available capacity on May 13, according to the system’s outage reports:

• At least 512MW of gas-fired capacity was already offline for maintenance or due to forced outages going into the day and remained offline through the 5 p.m. ERCOT conservation plea.

• Beginning that morning and continuing through 5 p.m., 3,719MW of additional gas capacity tripped offline; 2,524MW of that capacity was still offline at 5 p.m.

• Following the release of the conservation plea, an additional 1,299MW of gas-fired capacity went down.

Clearly, gas and coal are not nearly as reliable or dispatchable as the fossil fuel industry claims.