Peabody, in Kayenta exit, is abandoning native workforce ahead of reclamation work

While Peabody has not said how it will staff reclamation jobs, its employee termination plan appears to be the product of a corporate strategy geared toward saving money by dismissing long-time employees and bringing in lower-paid contract workers.

Peabody’s actions come at a time when other coal companies also are moving to strand whole communities through abrupt layoffs and cutting benefits and pensions, all while seeking to avoid making good on tax obligations.

Peabody itself estimates cleanup associated with the Kayenta complex will take at least two years and will employ almost 200 workers, estimates that—because they come largely from Peabody—may very well be underestimating the scope of the requisite reclamation.

As Peabody Energy ceases production this month at the Kayenta Mine complex in northern Arizona, the company is abandoning its long-time workforce even as it faces a vast amount of reclamation responsibility in the area.

The photograph below—part of a series that appear in this report—suggests the scale of cleanup work that remains at the complex. 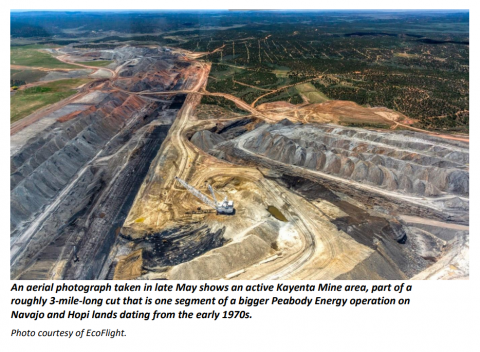 The company has filed a Worker Adjustment and Retraining notice with the state but has otherwise been quiet about its intention to lay off the remaining 295- workers on the payroll at the complex, which has been in operation since 1973. While such notification “protects workers, their families, and communities,” according to guidelines published by the U.S. Department of Labor, little if anything is being done in response by government agencies at the federal, state or tribal levels. Peabody filed the notice on June 13 and will begin issuing pink slips on Aug. 12 on a timetable that will terminate all Kayenta employees by the end of the month, according to published reports. The mine complex is the sole supplier to the aging Navajo Power Station, which is being closed in December as the result of competitive market forces driven by cheap fracked gas and the rise of renewables.

The layoffs are occurring even though Kayenta miners have the very expertise and heavy-equipment skills needed for the required reclamation work, which will take years to complete and require a sizeable workforce.