Puerto Rico electricity prices will remain among the highest in the nation.

The plan offers a $400 million bond to pay fees for advisors.

It includes unrealistic recovery rates of 60 to 84 percent for bondholders.

Puerto Rico regulators have learned little from past attempts to resolve the debt crisis.

The Puerto Rico Financial and Oversight Management Board (FOMB) has issued a plan to restructure the Puerto Rico Electric Power Authority’s $8.9 billion debt, using a combination of $5.4 billion in new bonds and sharp increases in the price of electricity over the next 35 to 50 years.

The board notes that the plan contains estimates, and readers “are cautioned not to place undue reliance on any of the financial information contained herein.” But the clearest conclusion that can be drawn from the plan is simple:

The price of electricity will go up.

The price of electricity will go up.

This is the fourth proposed deal (after two failed settlements and an aborted mediation settlement) to address the debt crisis of the electric authority, known as PREPA. The new plan shows that FOMB has learned very little from past failures.

The little that was learned, however, is worthy of mention. The plan exempts low-income residents from having to pay the majority of the rate increase, which would be structured as a flat monthly charge plus a rate for each kilowatt-hour (kWh) of electricity consumed. According to FOMB’s proposal, people who are poor are exempted from paying a flat fee and the rate on the first 500 kWh per month of consumption. IEEFA estimates that this constitutes more than 40% of Puerto Rico’s population.

This is the first time any proposed debt plan has acknowledged the inability of any portion of Puerto Rico’s population to pay.

Raising the price of electricity further when it is already among the highest in the nation, and the ratepayers are among the poorest, is not a solution.

The assumption is that the rest of the population would pay the entire bill for the debt over the next 35 to 50 years. If this is supposed to be a solution to PREPA’s debt problem—to put the grid on a firm financial footing and move PREPA toward market access—then this plan deserves the same fate as the first three plans. A careful review of the 400 pages of explanation and the 96-page plan tells us why this plan is unsustainable.

The disclosure statement tells us:

Despite PREPA’s failure to increase energy rates, a majority of respondents, in a June 2020 survey of PREPA’s customers, indicated that they were dissatisfied with the cost of electricity. On average, PREPA’s customers “pay more for electricity relative to their income than consumers in any U.S. state.”

The plan does not address the operational 800-pound gorilla: The fuel budget.

First, the rates charged to consumers have not kept pace with either expenditures or debt costs. The point that PREPA historically failed to raise rates is presumed by the FOMB to be the result of a reckless political system. The failure to raise rates may reflect the recognition that Puerto Rico has a no-growth economy with a lot of low-income people. People who are poor will not buy electricity if they’re charged too much for it. Electricity is a basic necessity. To go without it is dangerous and unhealthy.

Second, how can people be paying more for electricity, relative to their income, than any state in the mainland U.S.? The price of electricity is currently at 28 cents/kWh and recently hit 33 cents/kWh, the highest price in the nation. The costs of fossil fuels that currently are the fuel of choice for PREPA management are driving the costs. When Russia invaded Ukraine, the price of electricity in Puerto Rico soared because the costs of oil and gas had skyrocketed.

Reductions in the fuel budget can be accomplished by implementing various approaches to solar energy.

Third, to raise the price of electricity further when it is already among the highest in the nation, and the people are among the poorest in the nation, is not a solution. IEEFA estimates that the plan could drive rates up between 4 cents and 8 cents per kWh depending on which financing method is chosen—a fact that is absent from the plan. This is a 14% to 28% increase in electricity at a time when the economy is not growing at all. To a customer, this money will simply pay back bondholders for debt incurred perhaps 20 years ago and now will be paid back for the next 50 years or more.

The documents outlining the new bond financing and subsequent increase in the price of electricity for ratepayers fail to take into account several points.

There are three obvious closing points that flow from this analysis. 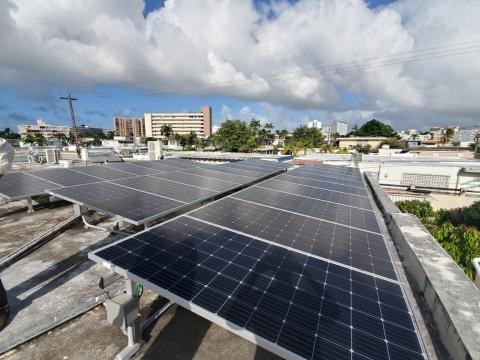