Rooftop solar, augmented by storage, is increasingly popular among residents

The federal government has the opportunity in the next month to rapidly accelerate Puerto Rico’s transformation towards renewable energy.

As we have written previously, the only renewable energy transformation that has occurred in Puerto Rico since Hurricane Maria destroyed the electrical infrastructure of the island five years ago has been the rapid expansion of rooftop solar by households and communities. The vast majority of these systems include battery storage that provides resiliency from severe storms and from ongoing, frequent power outages.

There are now more than 400 megawatts of grid-connected rooftop solar and storage systems in Puerto Rico, with about 2,000 more connected each month. The systems now make up a bigger share of the island’s electricity consumption than utility-scale solar.

Last year, IEEFA co-released a modeling analysis with CAMBIO PR that investigated the feasibility of achieving 75% renewable energy in Puerto Rico by 2035, based primarily on rooftop solar and storage. Reaching this level of penetration, however, would require rooftop solar to be accessible to the vast majority of households on the island—an uphill climb, given a median annual household income of $21,000. Puerto Rico is further disadvantaged by the fact that the 30% federal income tax credit for residential solar does not apply to many island residents.

Although Congress has said federal funds available to Puerto Rico after Hurricane Maria could be used for renewable energy, private grid operator LUMA Energy and Puerto Rican officials have proposed to use less than 3.5% of available funds for renewables. More than $12 billion is available; the Puerto Rico Electric Power Authority (PREPA) has proposed a $35 million low-income solar project, and LUMA has proposed a $20 million renewable energy microgrid project and $362 million for grid-scale battery storage.

Some members of Congress are now pushing for $5 billion to be allocated specifically towards rooftop solar and storage in Puerto Rico, targeting low-income communities and people who waited longest for electric service to be restored after Maria. The White House’s recent appropriations request to Congress included $3 billion for the project.

This is the scale of funding that is necessary to catalyze a transformation to rooftop solar and storage in Puerto Rico. If implemented appropriately, $5 billion could provide systems to more than 200,000 of the most vulnerable households in Puerto Rico. Integrating this many photovoltaic systems into the grid in Puerto Rico would also require LUMA to upgrade many of the island’s distribution feeders, using available federal funds.

But so far, the federal government has only allocated funds to rebuild Puerto Rico’s electrical system every time it fails in a hurricane. The strategy has been frustratingly slow and has not facilitated the necessary transformation to a resilient and affordable system that can withstand severe storms without weeks of power outages. It is time for a more forward-thinking approach, one that follows the lead of the people of Puerto Rico. 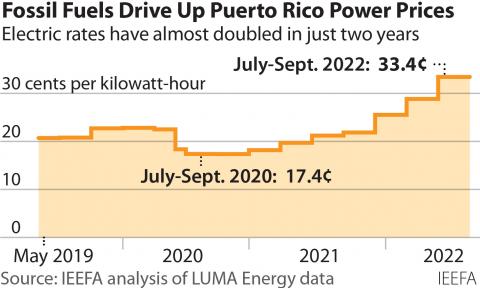