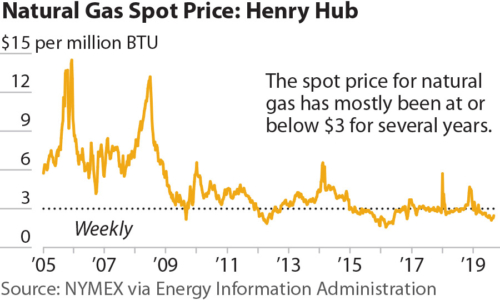 With the news from IHS Markit that natural gas prices in the United States will drop below $2 MMBtu in 2020 and remain low through at least 2024, if not longer, heads must be exploding in the board rooms of oil and gas producers throughout the U.S. and Canada. The profit picture is now imploding.  The ramifications run deep, far and wide.

Oil giants are expected to succeed where smaller, nimbler players have failed

Other factors not mentioned by IHS Markit are also significant:

THE NEWS OF LOWER-FOR-LONGER NATURAL GAS PRICES SETS THE STAGE for more problems in the fossil fuel sector. It has also unleashed a very important financial trend. Low natural gas prices are driving down electricity, home heating and industrial production costs. Consumers and businesses are getting accustomed to stable and perhaps even lower prices.

The low-price environment has all but sealed the fate of the coal sector.  The instability of natural gas markets, however, may be its undoing, even as new gas plant production and petrochemical expansions are incentivized to grow. Competitive challenges from the renewable sector and other technological creations are moving to zero-fuel-cost solutions – a factor that will outpace even lower priced natural gas advantages.

IEEFA report: GE made a massive bet on the future of natural gas and thermal coal, and lost