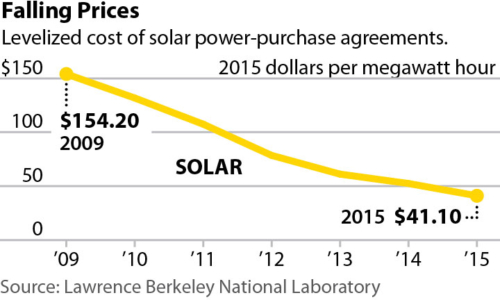 The levelized prices for power from utility-scale solar projects (5 MW and larger) declined by 73 percent from a capacity-weighted average of $154.20 levelized (in real $2015 dollars) in 2009 to an average of $41.10 per MWh levelized in 2015. Recent solar PPAs in California, the Southwest and Texas are priced as aggressively as $35/MWh levelized, or lower.

These steep declines in have been driven by sharp drops in installation costs and improvements in operating efficiencies and performance. All of these PPA prices also have benefitted from subsidies in the form of the wind production tax credit (PTC) and the solar investment tax credit (ITC).

However, it is becoming widely acknowledged that wind and solar will remain highly competitive even when these subsidies are gone.

NextEraEnergy (NEE), one of the largest generators of solar energy in the U.S., has said that due to continuing declines in costs, wind power PPA’s will be in the range of $20 to $30 per MWh levelized, even without any subsidies. NEE also projects that after 2020 new solar PPA prices will remain in the range of $30 to $40 per MWh levelized, again without any subsidies. Further, UBS analyst Julien Dumoulin-Smith agrees that these low unsubsidized prices for wind and solar are achievable by early 2020 due to continued pricing pressures driving down wind and solar installation costs. UBS says that the prices for solar panels are headed down towards $0.20 per Watt, “Just a matter of when this becomes widespread.”

Thus, by the early 2020s, unsubsidized wind and solar prices will be below the variable costs of operating coal and natural gas plants, just like subsidized prices are today.