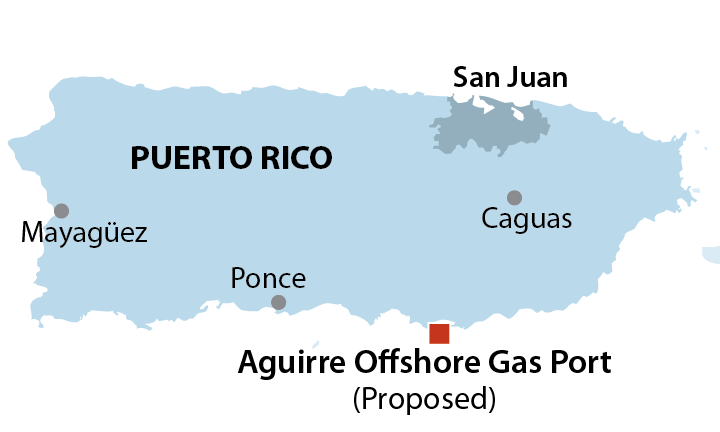 In shelving its review of the economic viability of a proposed natural gas import complex off the south coast of the island, the Puerto Rico Energy Commission last week took a policy step in the right direction.

The Aguirre Offshore Gas Port (AOGP) would bring additional liquefied natural gas into the commonwealth for electricity generation, but the commission noted that the project today lacks a clear economic rationale. The bankruptcy last year of the Puerto Rico Power Authority (PREPA) and the lingering impact of last year’s hurricanes “have put the status of the AOGP into question and require a reassessment of the facts and circumstances regarding the AOGP.”

AOGP for the past several years has been a controversial cornerstone of PREPA’s plan to transition its electricity-generation system to one more reliant on natural gas than oil. PREPA may continue to push for the project—in spite of the commission’s recent action—as part of a new integrated resource plan it will issue this year.

The likelihood of this project ever being economically beneficial to PREPA’s customers seems low.

‘By increasing penetration of renewable energy and making energy efficiency a priority, PREPA’s need for fossil generation will decrease substantially.’

Even before Hurricanes Irma and Maria all but destroyed Puerto Rico’s electricity system in September, the economic justification for AOGP was questionable. In 2016, the Energy Commission noted that any economic benefit of the project would be ephemeral if PREPA were to become serious about transitioning to renewable energy.

“By increasing penetration of renewable energy and making energy efficiency a priority, PREPA’s need for fossil generation will decrease substantially,” the commission wrote. “In 15-20 years, PREPA could be consuming fossil fuel only from its purchase power arrangements (AES and EcoEléctrica, or equivalents), and Costa Sur. Under this reasonable and appropriate future scenario, AOGP’s value would have been short-lived.”

In the wake of the 2017 hurricanes, the justification for AOGP is even weaker.

The project, which would include the conversion of the existing power plant at Aguirre to run on natural gas rather than oil, would cost over half a billion dollars. It would be a major capital investment and would worsen Puerto Rico’s dependence on south-to-north electricity transmission. Hurricane Maria made the fragility of this grid configuration, in which power produced in the south must be sent some 80 miles through the mountains to urban centers in the north, very apparent.

CONSTRUCTION OF AOGP WOULD ALSO AMOUNT TO AN OVERBUILDING of fossil fuel capacity. We estimate that, if AOGP were to be built and the existing power-generation units at Aguirre were to be upgraded to run on natural gas, PREPA would have a reserve margin of greater than 80% by 2023. Further, the utility would be capable of generating 28% more electricity than needed to meet demand, meaning that the new units would be underutilized and capital investment wasted.

This overbuilding would crowd out investment in renewable energy, which makes more sense for Puerto Rico because it is cheap, reliable, and abundant.

The Financial Oversight and Management Board, the congressionally-established fiscal controller for Puerto Rico, also appears to have backed off its support of the project. PREPA’s pre-hurricane fiscal plan, submitted to the board one year ago last month, prominently featured the AOGP project (even though it had not secured Energy Commission approval).

But the fiscal plan approved last month backs off the AOGP project, noting that it is to be studied as part of PREPA’s next long-term integrated resource plan. In a letter to IEEFA, the board reaffirmed that the fiscal plan “does not assume the gas port is required.”

PREPA is preparing now for the filing its latest integrated resource plan with the Energy Commission this fall. IEEFA recommends that the agency stop advocating now for an ill-advised investment that would lock Puerto Rico into a future of dependence on natural gas imports and centralized power generation.

IEEFA Op-Ed: Now Is Not the Time to Roll Back Oversight of Puerto Rico’s Power Company

IEEFA Report: Puerto Rico Can Get 40% of Its Electricity From Renewables by 2028