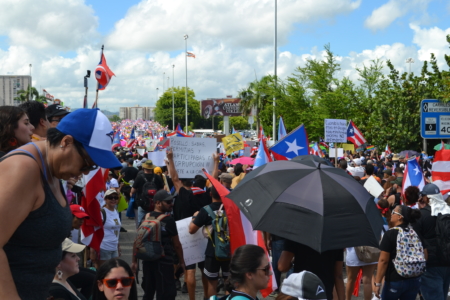 July 24, 2019 (San Juan, PUERTO RICO) – Puerto Rico has experienced a remarkable week, culminating in mass protests that have received wide coverage in the U.S. media. All sectors of Puerto Rican society have united in an attempt to unseat Governor Ricardo Rosselló. More than 10% of the entire population of the island marched in the streets of San Juan on July 17, and more than 14% on July 22, with another massive day of national protest scheduled for July 25 – a veritable revolution if it were to happen in any of the 50 United States. Nothing like this has occurred in living memory.

PUERTO RICO HAS BEEN IN CHAOS SINCE JULY 13 when the Puerto Rico Center for Investigative Journalism released an 889-page series of chat messages between Governor Rosselló and his inner circle, in which they managed to insult virtually the entire population with misogynistic and homophobic remarks, a joke about dead bodies piling up after Hurricane Maria, as well as taunts aimed at journalists, artists, politicians and prominent members of Puerto Rican society. The chats also revealed the sharing of confidential government information with lobbyists and pointed to possibly corrupt contracting practices. The latter would come as no surprise given the arrests on corruption and fraud charges by the FBI earlier that same week of six individuals, including the former secretaries of Education and the Health Insurance Administration. The Puerto Rican Treasury Secretary was also fired after referring to his department as an “institutional mafia.”

Rosselló has offered Puerto Rico no way out, no road map – just failure cloaked in rhetoric

It is not just the chats. It is not just the recent arrests. It is not even the poorly managed response to Hurricane Maria. Rosselló has offered Puerto Rico no way out, no road map – just failure cloaked in rhetoric and self-dealing and influence peddling in broad daylight. The governor has presided over the decimation of public education (the former education secretary had closed down nearly 400 schools and aggressively introduced charter schools), cuts to the University of Puerto Rico, cuts to pensions, and the privatization of major public services, including ongoing efforts to privatize the Puerto Rico Electric Power Authority (PREPA).

Further, in conjunction with the fiscal control board for Puerto Rico (imposed by the U.S. Congress in 2015 to oversee the restructuring of Puerto Rico’s $72 billion in public debt, plus pension obligations), the Rosselló administration has participated in the negotiation of several recent bond deals that the island can ill afford to pay.

CHANTS THIS WEEK ON THE STREETS HAVE SHOWN THE PUBLIC’S BOILING OVER ANGER at all of these insults: “Ricky, renuncia! Y llévate la Junta!” [“Ricky, resign – and take the Board with you!”], “Esa deuda es ilegal, no la vamos a pagar!” [“This debt is illegal, we won’t pay it!”], “Dónde está Ricky? Ricky no está aquí.  Ricky está vendiendo lo que queda del país.” [“Where is Ricky? Ricky is not here. Ricky is selling what’s left of the country”].

But it is not only recent history that has caused people to take to the streets. Even Rosselló’s forced resignation by popular demand – as historically unprecedented and powerful event as that is – does not put an end to corruption in Puerto Rico overnight. After all, entire departments of government do not become “institutional mafias” overnight either.

IT IS IMPOSSIBLE TO UNDERSTAND CORRUPTION IN PUERTO RICO WITHOUT LOOKING INTO ITS LONG-STANDING COLONIAL RELATIONSHIP WITH THE UNITED STATES. Corruption dates back to U.S. military rule and the first governors, unelected officials appointed by the U.S. president, often in response to political favors or campaign contributions and with no corresponding knowledge of Spanish, let alone of the people under U.S. governance. In the early days of American rule, Puerto Rico’s domestic coffee industry was destroyed and supplanted by sugar plantations imposed by Washington. Puerto Rico’s first governor, Charles Allen (1900-1901), did not even bother finishing his term before launching the American Sugar Refining Company. Governor Montgomery Reily (1921-1923) was a significant campaign donor to President Warren Harding and was later accused of embezzling public funds.

Economic dependence on the U.S. creates many opportunities for ambitious Puerto Ricans to enrich themselves and their friends

The culture of corruption persisted even when Puerto Rico transitioned to democratically elected governors in 1948. The island’s ongoing economic dependence on the U.S. for capital, as well as the island’s large public sector, creates many opportunities for ambitious Puerto Ricans to enrich themselves by using government positions to steer contracts to themselves and their friends.

A PRIME EXAMPLE OF THIS “PAY TO PLAY” SYSTEM, CAN BE SEEN IN THE SLOW, CORROSIVE INFLUENCE OF CORRUPTION IN THE PUERTO RICO ELECTRIC POWER AUTHORITY (PREPA) – now bankrupt and physically devastated but once considered a crowning achievement of effective public management, bringing electrification to remote parts of the island that private companies had neglected to serve.

Over time, politicians of both parties have secured their own political appointees to PREPA, often without regard to qualification. Such appointees – now numbering in the hundreds – are there to fundraise (in part through favorable contracting) and to implement the pet energy projects of whatever party is in power.

AN INVESTIGATIVE REPORT FROM THE FISCAL OVERSIGHT BOARD NOTED THAT PREPA IS ALLEGEDLY ONE OF THE LARGEST SOURCES OF POLITICAL FUNDRAISING ON THE ISLAND. In the last decade and a half, PREPA has started and abandoned two natural gas pipeline projects and a natural gas import terminal, while generating less than 2% of its electricity from solar power despite its prime Caribbean location. PREPA has also been sued over a multi-billion-dollar oil contracting scandal, in which PREPA customers overpaid for low-quality oil, likely for well over a decade. When political deals take precedence over energy planning and when revenues from electric rates are seen as an unlimited source of funds for generating other politically-motivated subsidies, the result is an electrical system in physical and financial ruin. Public ownership – if not democratically accountable – turns out to be just another structure from which to steal from ordinary citizens.

In the early days, it was industrial interests, first in the sugar industry, then came the oil companies

Who has profited from all of this? Of course, ambitious Puerto Rican politicians have benefitted politically and financially from corruption. But the real winners have been off-island, American interests. In the early days, it was industrial interests, first in the sugar industry. Then came the oil companies who remain a powerful presence. Now it is financial interests – in particular the law firms, financial advisors, auditors and other consultants who profited from deals that helped get Puerto Rico into its enormous debt crisis and now profit from ushering in the next phase.

PREPA, for example, has spent nearly $150 million in fees for legal and financial advisors since going bankrupt in 2014 – paid for by the people of Puerto Rico. And these U.S. mainland experts have not produced a solution to transform the utility into a viable enterprise. How were these consultants chosen? Who knows? Over the same time, PREPA has lost more than 15% of its employees, while both management and the Financial Oversight and Management Board (FOMB) continue to push cuts to employee medical benefits and pensions. In less than two years, the FOMB itself has paid $57 million to the management consulting firm McKinsey, again paid for by the people of Puerto Rico. These lawyers and financial consultants are particularly pernicious because they have no real incentive to fix problems – if Puerto Rico goes bankrupt again, the whole cycle of fees starts all over.

THERE ARE MANY MEMBERS OF THE ISLAND’S POLITICAL ‘BOYS’ CLUB’ WHO COULD REPLACE RICARDO ROSSELLÓ AND HIS DECIMATED CABINET without ending the systemic corruption of the Puerto Rican government. The challenges ahead are for the Puerto Rican people to force a new government to bring in independent monitors who can root out corruption on a daily basis, demand the democratization of compromised institutions, maintain institutions under public ownership that is actually accountable, and ultimately, to change the fundamentally colonial relationship with the United States.

The peaceful revolution taking place in Puerto Rico cannot end simply with the ouster of Ricardo Rosselló. And it will not – even if the current movement quiets down, something new is being forged in Puerto Rico. It will take time for the consequences to work themselves out, and the path will not be linear, but Puerto Rico will never be the same after these exceptional weeks of July 2019.

IEEFA Puerto Rico: Despite the scandal, FOMB is still rushing through an unaffordable debt deal