IEEFA Indonesia: A Potential Overcommitment to Coal-Fired Electricity Puts a Nation at Risk 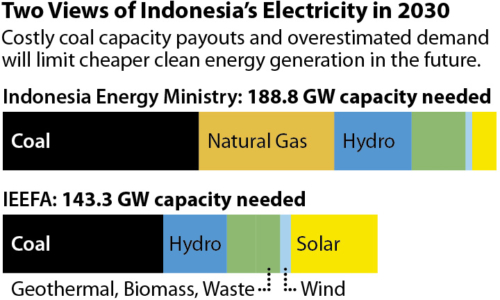 We’ve just published a report that calls into serious question Indonesia’s plans to expand its commitment to coal-fired electricity generation.

The report—“Overpaid and Underutilized: How Capacity Payments Could Lock Indonesia Into a High-Cost Electricity Future”—analyzes Indonesia’s 2017-26 national energy blueprint and shows how long-term coal power contracts that the country is contemplating will not just require Indonesia to pay for energy it is not using but will require such payments for years on end.

Indonesia can ill afford such a commitment.

Our research shows how current plans will mean the state power authority, Perusahaan Listrik Negara (PLN), will be locked into 25-year coal-fired purchase power agreements that will cost an estimated USD $76 billion.

Such a buildout would have an especially egregious effect in Java-Bali, where we calculate that current capacity, supplemented by renewable energy, exists in sufficient quantity to cover electricity demand until 2026.

Renewable energy is already cheaper than coal in many markets around the world, and Indonesia can benefit hugely from this trend. We think Indonesian planners are far less ambitious than they could be in development of solar, especially, and that a more progressive and modern approach would be in the best economic interest of the country.

Our report acknowledges the importance of continuing the use of capacity payments to encourage private sector investment in Indonesia. However, it cautions that the more entrenched these commitments are and the farther they stretch into the future, the likelier they will serve the interest of aging and under-utilized thermal power plants at the expense of better investments.

Capacity payments, which guarantee electricity producers of revenue regardless of whether their capacity is even tapped, ensures independent power producers (IPPs) of a revenue stream that provides a return on the significant project capital investment they make. However, capacity payments also expose PLN and Indonesian consumers—households and businesses alike—to significant risk of paying for access to power that is not needed.

CHANGE IS SWEEPING GLOBAL ELECTRICITY-GENERATION MARKETS, AND IT IS NOT TOO LATE FOR INDONESIA to take part. As renewable energy costs have fallen, utility managers, policymakers and regulators everywhere are having to rethink the way markets are structured.

A better, highly viable economical path to achieving national energy security lies through development of renewable energy and in the diversification of energy sources across Indonesia’s power-generation portfolio.

Full report: “Overpaid and Underutilized: How Capacity Payments Could Lock Indonesia Into a High-Cost Electricity Future”

IEEFA Update: A Sense of Desperation in Global Coal-Expansion Campaigns