If market price is the benchmark for compensating the early closure of coal assets, then recent deals indicate that Germany’s coal and lignite power plants and mines have very low value, and make a mockery of compensation claims by Germany’s biggest utility, RWE, under the country’s pending coal phaseout plan.

RWE says it wants to be compensated for the premature closure of its coal power plants in line with the most generous pay-outs of the past, a position that ignores the darkening outlook for coal mining and generation, and which pits the company against genuinely affected mining communities for precious taxpayer funds.

Times have changed since the Paris Climate Agreement.

The coal exit panel published its findings on Feb.1, recommending a final coal phaseout by 2038 or sooner, and proposing billions of euros for affected coal mining communities.

The panel was vague on compensation for affected power plant operators, however, saying only that this should be hammered out bilaterally, based on previous compensation levels for plant closures.

In the resulting uncertainty, RWE has duly made a bid, for “at least” 1.2 billion euros ($1.4 billion) for every gigawatt (GW) of power generation it loses, implying a total of €19 billion for the company’s 11 GW of lignite and 5 GW of hard coal operations. RWE has based half this claim (€600 million per GW) on a previous scheme for mothballing ageing coal power plants, and the rest on compensation for shutting mines.

The scheme RWE is basing its claim on – the “standby capacity reserve” – in 2015 offered compensation of €1.6 billion, to some 2.73 gigawatts of lignite generation, or €586 million per GW. The European Commission approved the scheme, finding no evidence of illegal state aid in the estimates of lost profits by the affected utilities: RWE, Mibrag and EPH.

IT COULD BE ARGUED THAT THE STANDBY RESERVE COMPENSATION WAS TOO GENEROUS, FORCING ENERGY CONSUMERS TO FOOT THE BILL for closing assets with an average age of 42 years. Utilities routinely depreciate their thermal power plants over a period of up to 40 years (RWE applies a 10-40 year rule), meaning that they are then fully paid off, have zero book value, and the utility faces no impairment charge from closing them.

Regardless, there are important differences between the 2015 scheme and the present day. Compensation under that historical scheme applied to lignite, while the present phaseout also applies to less profitable coal. And the coal phaseout will be extended over a period of nearly two decades, rather than the four-year mothballing of the standby reserve.

In addition, times have changed dramatically since 2015. Significantly, the Paris Agreement on climate change, agreed later that year, achieved global consensus on actions that doomed the coal power sector in developed economies.

The International Energy Agency estimates that the Paris Agreement implies near-zero coal-fired generation in Europe by 2030 (see Figure 1 below). 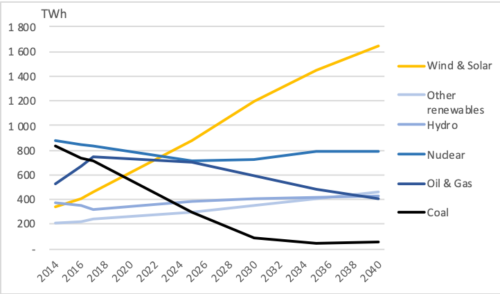 Investors are acting on such analysis. IN A LETTER TO THE FINANCIAL TIMES IN LATE DECEMBER, MORE THAN 90 MAJOR INVESTORS COLLECTIVELY REPRESENTING ASSETS WORTH $11.5 TRILLION CALLED FOR A COAL PHASEOUT, saying – “We expect explicit timelines and commitments for the rapid elimination of coal use by utilities in EU and OECD countries by no later than 2030, defining how companies will manage near-future write-downs from fossil fuel infrastructure.”

As a result of these and other headwinds, including rapidly rising European carbon prices, valuations of coal assets have plummeted.

At the Institute for Energy Economics and Financial Analysis (IEEFA), we show how the present value EBITDA of power sales at RWE’s Neurath lignite power plant falls sharply through 2022 (before accounting for carbon and power price hedges), using RWE’s own estimates for electricity generation costs, and forward market prices for power and carbon (see Figure 2 below).

Figure 2. Impact of Forward Curves for Power and Carbon on Neurath’s EBITDA from power sales, on a Present Value Basis

Perhaps the most damning verdict is provided by the market, however.

In 2016, Vattenfall gave away for free, to a Czech billionaire, its German portfolio of five open-cast lignite mines and four lignite-fired power plants with a combined capacity of 7.6 GW. The deal hardly needed sweetening, but Vattenfall added €1 billion in cash, to help soften land restoration costs valued at €1.4 billion. The same buyer, energy firm EPH, will no doubt now try to claim compensation under the impending coal phaseout, in the same way as RWE.

Last month, Bloomberg reported that another major European utility, France’s Engie, had agreed a sale price of just €250 million for 2.3 GW of coal assets in Germany and the Netherlands, including the 800 megawatt Rotterdam power plant, which was only commissioned in 2015.

And last week, Greece’s Public Power Corporation (PPC) failed in its effort to sell one-third of its coal power plants. The single valid bid received was reportedly only one-sixth of the official valuation, and for only one of the three power plants on sale.

Such recent market activity indicates a valuation range from near-zero to €100 million per GW, for a variety of European coal and lignite power plants and mines, starkly lower than RWE’s €1.2 billion pitch.

INDEED, THERE IS A QUESTION MARK OVER WHETHER RWE AND OTHER GERMANY COAL POWER OPERATORS SHOULD BE ENTITLED TO MARKET PRICES AT ALL, given that these closures are not a result of an unforeseen development, as for example, forced land purchase to make way for a new railway.

No self-respecting energy executive operating a fossil fuel asset anywhere could be ignorant of the risks from climate action and renewables. Energy companies have had many years to reduce coal exposure accordingly, and at significant cost if necessary, as Vattenfall did in 2016, and Engie is attempting to do now. But this argument may be superfluous, since the “market value” of these 40+ year-old plants, it turns out, is very little, or even nothing at all.