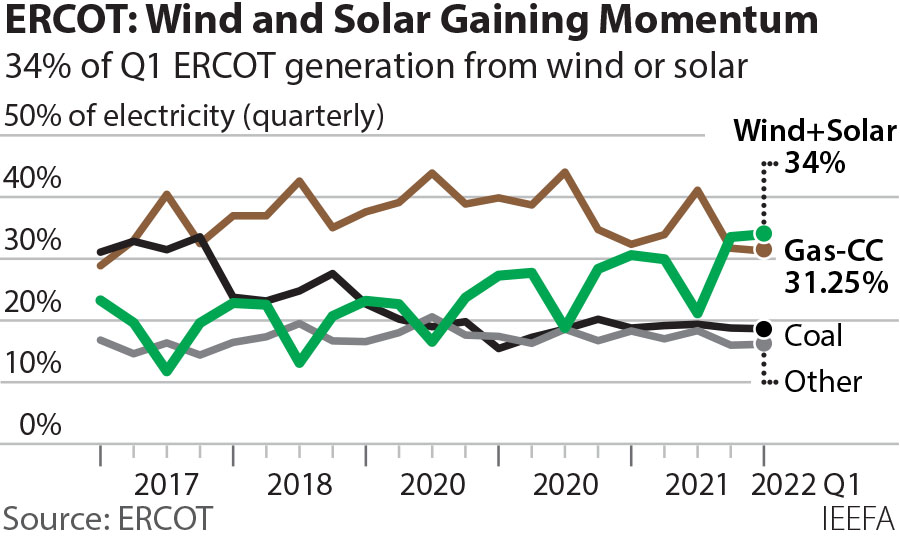 The restructuring of the Texas electric generation market continued in the first quarter of 2022, with wind and solar producing a record 34% of the power dispatched by ERCOT (Electric Reliability Council of Texas), the transmission system operator that distributes most of the state’s electricity.

The new market share record is particularly impressive in light of the sharp increase in overall electricity demand across ERCOT. Through the first quarter, demand was up more than 9% to 95.1 million megawatt-hours (MWh). But wind and solar are growing at an even faster clip: Wind generation was up 14% for the first three months while solar output jumped a whopping 85%. Together, wind and solar accounted for 71% of the generation increase during the quarter. IEEFA noted the growing competition between renewables and gas in 2021, when wind and solar generation nudged out ERCOT’s combined cycle gas turbines (CCGT) for the top spot during the first four months of the year. Now the gap has widened, with wind and solar producing 32.3 million MWh in the quarter, compared to 29.7 million MWh for the region’s CCGTs.

The rapid growth in renewable generation is certain to continue

The rapid growth in renewable generation is certain to continue, in particular as the buildout of the state’s significant solar resources picks up speed. The amount of installed solar more than doubled in 2021, jumping to 8,274 megawatts (MW) of capacity by the end of the year according to ERCOT data. The total has already climbed to 11,190 MW and the system operator estimates that the total could climb to almost 18,000 MW by the end of the year. Solar capacity totaling another 8,000 MW is expected online by the end of 2023. The new total only counts projects that have already set aside the funds to pay for their interconnection to the ERCOT system, which makes it likely they will be built. Another 9,000 MW of planned capacity is in the ERCOT development queue, but not as far along in the planning process.

The new capacity has had a predictable impact, pushing solar generation up significantly. Daily generation topped 30,000 MWh for the first time less than two years ago, a record IEEFA noted here. The daily generation record more than doubled in 2021, topping 60,000 MWh 66 times. Already this year, ERCOT’s solar record has jumped to 93,180 MWh—a mark that is certain to be eclipsed as the days lengthen and additional capacity is added to the system. Another indicator of the sector’s growth is that solar generation has been more than 30,000 MWh for 88 of the first 103 days of 2022, and through March 31 has already topped the 2021 record on 15 days.

SOLAR’S SHARE OF ERCOT THIS YEAR HAS CLIMBED TO 4.9%, up from 2.9% over the same period in 2021. It is unclear how high solar’s market share in ERCOT will climb for the year, but it certainly will be well above last year’s 4%.

Looking at the grid’s overall demand does provide some interesting perspective on the direction solar is headed. In 2021, total ERCOT demand was 392.8 million MWh, or 1.07 million MWh a day. EIA data through April 13 this year yields a similar result, putting daily ERCOT demand at 1.04 million MWh. Assuming that solar generation tops 100,000 MWh in the next couple of months would push its market share to roughly 9.5%, at least on full sun production days. That would underscore the resource’s meteoric rise, given that ERCOT did not even independently track solar output until 2016.

Wind, with some 35,000 MW of capacity already installed, is expected to grow at a slower rate. But ERCOT still sees the potential for installed wind generation to top 40,000 MW by the end of 2023.

In addition to the growing wind and solar generation resources, developers have big plans for battery storage. There was just 833 MW of installed battery storage capacity in ERCOT at the end of 2021; the system operator now says that could jump to almost 5,000 MW by the end of this year and more than 6,500 MW by 2024. Charged up with wind during overnight periods of high production and low demand or solar during peak daytime production hours before the evening demand spike, the storage resources will further cut into fossil fuel generation, widening the output gap between renewables and gas that appeared this quarter.

The transition that first saw renewables catch and then pass coal-fired generation is now on the horizon for gas. As with the coal experience, the shift won’t be immediate. Wind generated more electricity than coal in a month for the first time in 2016 but it wasn’t until 2019 that wind and solar together finally topped coal. Similar trends are now beginning to appear for gas. That this is occurring in a market where electricity demand is still growing strongly shows that the renewable transition is possible across the U.S.—and sooner than many think.

IEEFA. Energy transition to renewables likely to accelerate over next two to three years