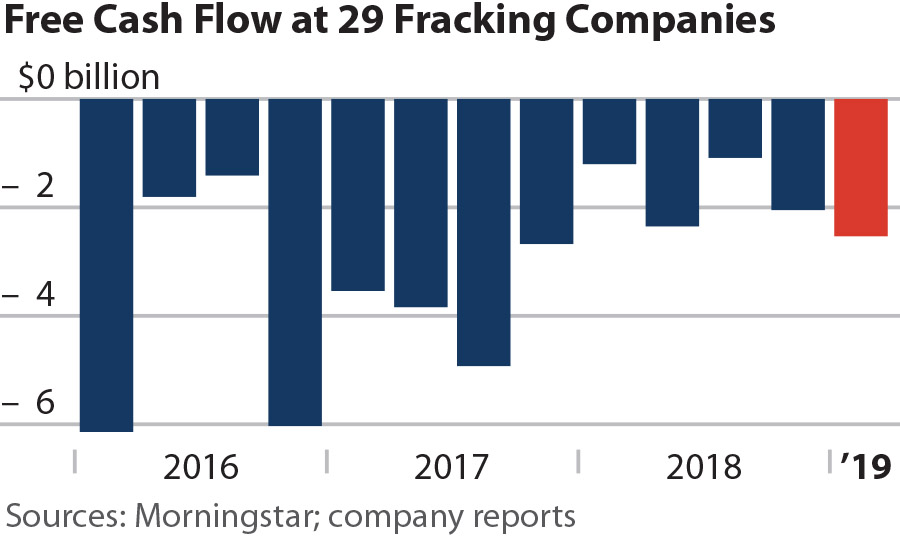 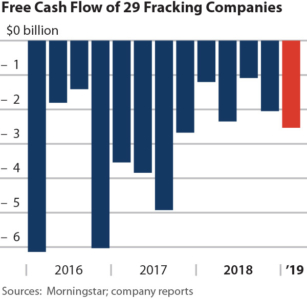 June 4, 2019 (Sightline/IEEFA) – The North American fracking sector once again spent more on drilling than it realized from sales of oil and gas, according to a briefing note released today by Sightline Institute and the Institute for Energy Economics and Financial Analysis (IEEFA).

The brief, Red Ink Keeps Flowing for U.S. Fracking Sector, traces a cross-section of 29 oil and gas companies that combined reported more than $2.5 billion in negative free cash flows during the first quarter of 2019.

“These results were even worse than in the fourth quarter of 2018, when the same group notched up $2.1 billion in negative cash flows,” said lead author of the report Clark Williams-Derry of Sightline. “We are seeing a continuation of the overall downward trend that confirms underlying weaknesses in the fracking business model.”

“These companies keep having to dip into cash reserves or sell off assets to remain afloat,” said IEEFA financial analyst Kathy Hipple who co-authored the report. “Investors are taking notice and it has become increasingly difficult for the companies to obtain capital.”

“From 2010 through early 2019, the companies in our sample racked up aggregate negative cash flows of $184 billion, hemorrhaging cash every single year,” said Williams-Derry.

The report noted that oil and gas bankruptcies have continued in 2019. Similarly, the oilfield services sector, which relies heavily on the fracking industry for revenues, has gone through nearly 180 bankruptcies involving more than $64 billion in debt since 2015–including, most recently, the insolvency of Weatherford International.

The report advises investors to view the fracking sector as a “speculative enterprise” with a weak outlook and an unproven business model.

Sightline Institute is an independent, nonprofit research and communications center. More can be found at www.sightline.org.