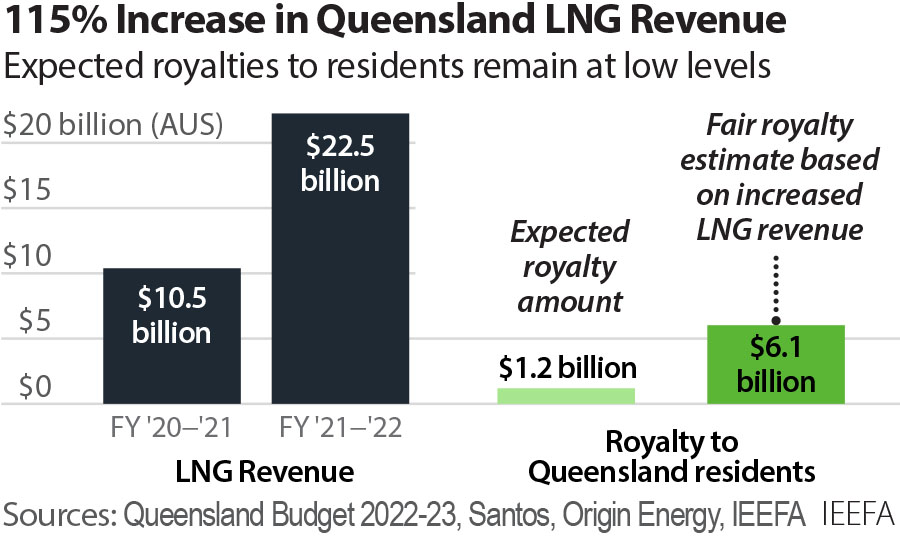 The gas industry has experienced similar windfall profits to the coal industry.

Energy consumers are seeing their energy bills increase despite the massive profits being made from mining the state’s natural resources.

Some A$5 billion more in state revenue is probably the more reasonable option for Queensland in the short term.

14 July 2022 (IEEFA Australia): Gas industry revenues are up 115% in the last financial year, yet Queenslanders are missing out on an estimated A$5 billion in royalties due to an ineffective royalty structure, finds a new report by the Institute for Energy Economics and Financial Analysis (IEEFA).

“The three Gladstone LNG exporters have more than doubled their revenue in financial year 2021-2022 to nearly A$22.5 billion, up from roughly A$10.5 billion in the previous financial year.

“That means they increased their revenues by around 115%.”

“Both the gas and the coal industry are charging very high prices for their products because that’s what they can sell them for into international markets,” says Robertson. “This is resulting in massive profits to companies, and rising gas and electricity prices in the domestic market.

“Energy consumers are seeing their energy bills increase despite the massive profits being made from mining the state’s natural resources.

“While the Federal government is striving for a solution to solve high energy bills and rising living costs, state governments could also be part of the solution to the benefit of taxpayers.”

“Queensland’s revised coal royalty structure asks for more than a quarter of the state’s coal industry’s revenue to be paid to the government in such an extraordinary current market with hyperinflated prices,” says Robertson.

“Considering that as a benchmark, if the government placed a similar royalty structure on gas, in the current extraordinary market it would translate to revenue for Queensland of A$6.1 billion in financial year 2021-22, or 27% of the gas industry’s current windfall revenue.

“That seems a fair share that the industry should pay to increase the health and wellbeing of Queenslanders for services and infrastructure.”

Co-author of the report IEEFA analyst Milad Mousavian says while the gas industry has different specifications to coal that would need to be considered if designing a new graduated royalty scheme, a similar revised royalty structure for the gas industry as the Queensland government adopted for the coal industry appears appropriate.

“If paying royalties on Queensland coal companies’ windfall profits is considered a good concept by the government, why shouldn’t the gas industry pay the same?

“The government has successfully revised the coal industry’s coal royalty structure to the benefit of Queensland. The model is there to do the same for the gas industry.”

Treasury documents show the government expects the petroleum (gas) royalty to be A$1.185 billion for financial year 2021-22 compared to A$298 million the previous financial year.

“Despite this jump, the expected gas royalties are nearly A$5 billion less than it could receive had it put in place a more ambitious and realistic gas royalty structure like coal’s,” says Mousavian.

IEEFA estimates there has been an unprecedented near tripling of LNG prices since the beginning of financial year 2020-2021 for the three Queensland LNG plants, and A$12 billion in additional revenue in the last financial year.

“With the three LNG plants in Gladstone making extraordinary profits thanks to the current energy crisis and soaring energy and commodity prices, a similar revised royalty structure for the gas industry as the Queensland government adopted for the coal industry would no doubt be warmly welcomed by Queenslanders,” says Robertson.

“The Queensland government may seek a fair share of the gas industry’s windfall profits or leave it to the Federal government to tax the exporters.

“Some A$5 billion more in state revenue is probably the more reasonable option for Queensland in the short term.”