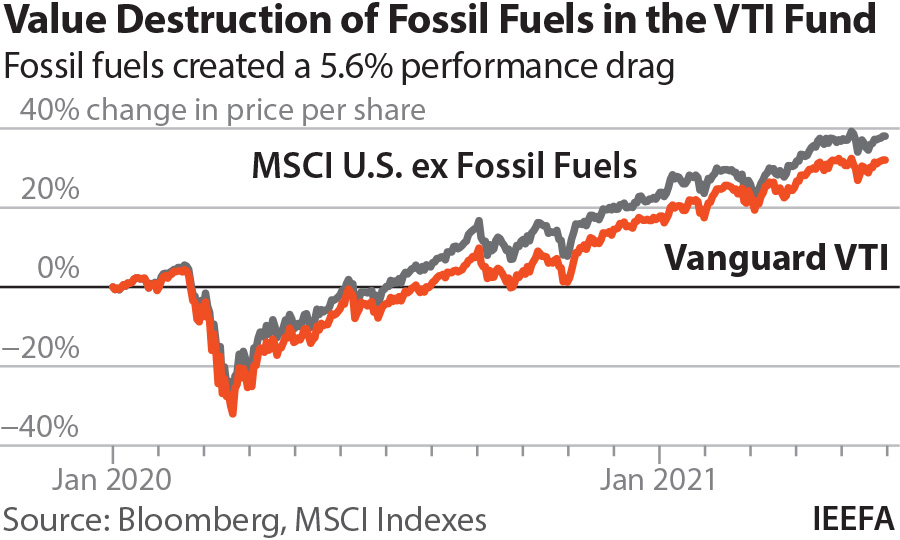 22 June 2021 (IEEFA Australia): Vanguard Group, the world’s second largest asset manager, is leaving its investors to face profound wealth destruction risks as the world’s largest investor in fossil fuels, all while insisting climate change is a priority for the company, finds a new report by the Institute for Energy Economics and Financial Analysis (IEEFA).

Vanguard manages over US$7.2 trillion in assets under management (AuM) which hold an estimated ~6% or $300 billion fossil fuel exposure across all of its funds including US$90 billion in thermal coal, a fact investors are likely ignorant of given Vanguard’s transparency failure.

“When compared to its peers – BlackRock and State Street, Vanguard is a global laggard, leaving its investors to suffer ongoing wealth destruction, and an embarrassment on the global stage,” says IEEFA’s Tim Buckley, co-author of the report.

“As a holder of nearly 10% of every company in the U.S., Vanguard holds enormous, almost entirely unregulated power to shape management decisions which reduce climate impact. Vanguard could change practice immediately and become a global leader but instead its passive approach to governance, engagement and climate is coming at a rising cost to its own investors in Vanguard products.”

The decision to retain fossil fuels is Vanguard’s alone

The decision to retain fossil fuels is Vanguard’s alone. Vanguard reserves the right to make changes to its benchmarks with only board approval. Many funds also employ a sampling strategy that frees it from owning every stock in an index.

In January 2020 Vanguard’s rival, BlackRock announced it was divesting thermal coal from across its active debt and equity funds, and since then significantly lifted efforts to align with net zero commitments.

Companies around the world have been accelerating exits from coal, oil and gas since then, with 172 globally significant financial asset managers and owners, banks and insurers/reinsurers having announced formal fossil fuel divestment policies to date.

“In contrast,” says Buckley, “Vanguard is underperforming its peers by not even having a basic coal exit policy while its voting record, engagement and investor stewardship efforts indicate climate is not a priority for the company. It’s behaving like a regional player in the big league which due to its enormous size, brings systemic financial risks to the global economy.”

Vanguard is underperforming its peers

Co-author IEEFA’s Trista Rose says Vanguard’s fossil fuel stocks have been experiencing low investment returns over the last decade, dragging some funds (for example, the Vanguard Total Market Fund [VTI]) by what appears to be as much as 6%.

“This would be troubling for investors if they actually knew what Vanguard was investing their money in,” says Rose. “Many of Vanguard’s funds lack sufficient transparency for investors to make informed investment decisions. Climate risk in particular should be transparent, as the majority of investors do not want fossil fuel-heavy portfolios.”

Co-author IEEFA’s Melissa Brown says Vanguard has the resources to innovate by incorporating low emissions index benchmarks and removing fossil fuel stocks from both its active and passive holdings immediately.

“Instead, the group acts like a ‘free rider’ on the work done by other market players,” says Brown. “Vanguard’s lack of engagement and single-minded focus on asset gathering damages their case for self-regulation.”

While BlackRock and its major competitors have been starting to align with the energy transition and engaging more with companies to accelerate the move out of fossil fuels, Vanguard has grossly underinvested in investment stewardship and its overall record of governance has been poor.

Vanguard has a long history of overwhelmingly voting with management and against climate resolutions. While Blackrock and State Street’s engagements with companies on climate has been progressively expanding, Vanguard has been vague on whether it has engaged any companies on climate. Further, its proxy voting guidelines suggest funds are generally unlikely to vote for operational changes (which would reduce emissions or otherwise).

“BlackRock has updated its investor stewardship policy to align more with climate change and State Street has been engaging with companies on climate-related issues since 2014. Meanwhile Vanguard has again done nothing, and it would seem prefers not to engage with companies – period,” says Rose.

Vanguard it would seem prefers not to engage with companies – period

“The group can’t hold nearly 10% of every Large Cap U.S company and not be accountable to climate risk.

“By 2030, the Big 3 – Vanguard, BlackRock and State Street – could likely own 30-40% of the U.S. stock market. In such a climate, players that are Globally Too Big To Fail should be behaving in a way that is in investors’ best interests, or in the case of Vanguard, regulated to ensure they have accountability if they are unwilling to lead themselves.”

The report notes that since January 2020, the Vanguard Total Market Fund (VTI) which is the largest mutual fund in the world (over US$1.2 trillion in AuM) underperformed by ~5.6% versus a comparable benchmark which excludes fossil fuels.

“With BlackRock’s entire fossil fuel exposure matching just VTI’s, we estimate the group could have saved investors some US$16 billion in the >$1 trillion in investments in the fund if they had begun the necessary divestment when BlackRock began theirs,” says Rose.

“This may only be the beginning of profound wealth destruction as financial losses are expected to escalate as more extreme weather events occur more frequently.

“Removing the ~6% fossil fuel exposure in Vanguard’s funds would not be difficult and could be done almost immediately.”

The report notes Vanguard’s policies to date suggest the company has yet to understand the financial case outlined by the International Energy Agency’s (IEA) roadmap to Net Zero by 2050, despite joining the Net Zero Asset Managers initiative.

“This would send a clear message to its investors and the global community that Vanguard, as part of the Big 3, is finally a responsible and trustworthy global player able to manage its US$7.2 trillion in investments in its investors, and the world’s, best interests,” says Rose.

Authors are available for interview and/or background briefings.