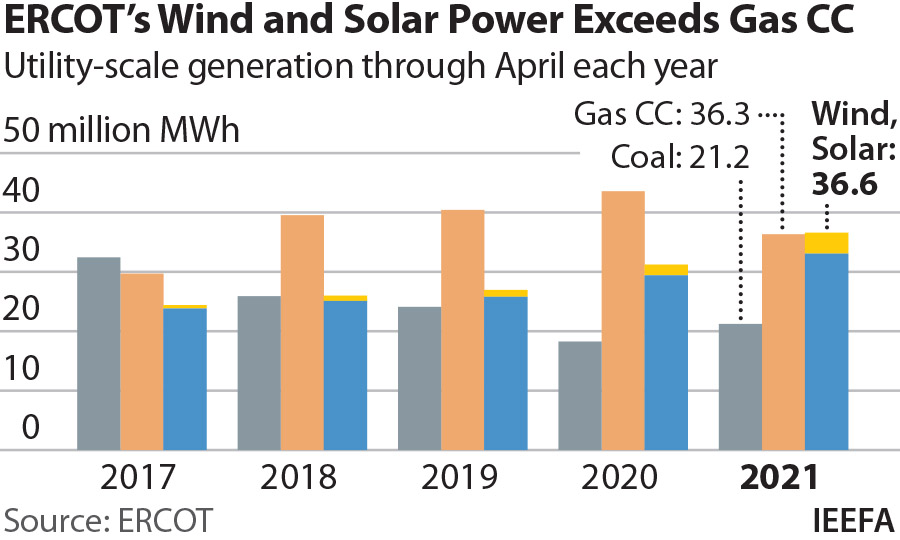 The transition continues: In April, wind and solar generation in the Electric Reliability Council of Texas (ERCOT) topped the output from its combined cycle gas turbine units (CCGTs) for the second month in a row. Equally notable, wind and solar have generated more power than ERCOT’s CCGT units (the backbone of the system’s electric generation) for the year to date—certainly a first in the gas-dependent system that serves about 90 percent of the state’s electric load. The transition resembles the earlier shift as wind and solar surpassed coal in the region. Wind and solar topped coal for the first time in March 2015, likely driven by seasonal low demand and high wind output, and then only two other times until 2019. That year, the shift became apparent, with wind and solar out-generating coal in seven months and for the year overall for the first time. The annual generation gap widened significantly in 2020, and while it may shrink somewhat this year as coal pushes some gas generation out of the market, there is no circumstance in which coal will again out-generate ERCOT’s renewable resources.

Now, wind and solar are poised to overtake ERCOT’s CCGTs. According to ERCOT’s latest interconnection data, 14,595 megawatts (MW) of new wind and solar capacity are likely to be online by September 2022—a 37.5% increase from the current total of 38,896 MW. ERCOT’s monthly installed capacity tracker shows that a significant portion of that generation will be online by the end of 2021. Using that data, IEEFA calculates that total renewable generation could climb to 149 million megawatt-hours (MWh) in 2022, putting wind essentially even with CCGT generation in the past two years.

Wind and solar are not just growing their market share, they are doing so in a growing market

The power of the transition is underscored by the continued growth in the overall ERCOT market. That is, wind and solar are not just growing their market share, they are doing so in a growing market. Total ERCOT demand year to date is up 2.7% from a year ago, to 115.3 million megawatt-hours (MWh) from 112.2 million MWh. Wind and solar have accounted for all of that growth, and then some. Total generation from the two renewable resources has jumped 5.4 million MWh from 2020 to 2021—a 17.2% increase.

In contrast, total fossil generation (here including coal, CCGTs and other gas units) fell from 67 million MWh to 64.6 million MWh. Within the fossil category, there was an increase in coal generation, while both CCGT and other gas output dropped. In other words, gas and coal are now battling one another for market share, with relative prices pushing one up or down. But there is no growth—that is being taken away by renewables.

An additional threat to ERCOT’s fossil fuel generators is just beginning to take shape: The installation of significant amounts of battery storage capacity. ERCOT data shows that 532 MW of storage is now installed, but this promises to be just the beginning of a wave of new capacity. By the end of the year, ERCOT projects that installed battery storage will top 1,600MW and continue climbing. At the end of the current forecast period, in September 2022, at least 2,200MW of storage capacity is expected online. Looking further out, 176 projects totaling 24,903MW of capacity (this figure only includes projects that have requested a full interconnection study from ERCOT) are in the ERCOT development pipeline.

Combined, these new resources will soon become the leading electricity suppliers in ERCOT.