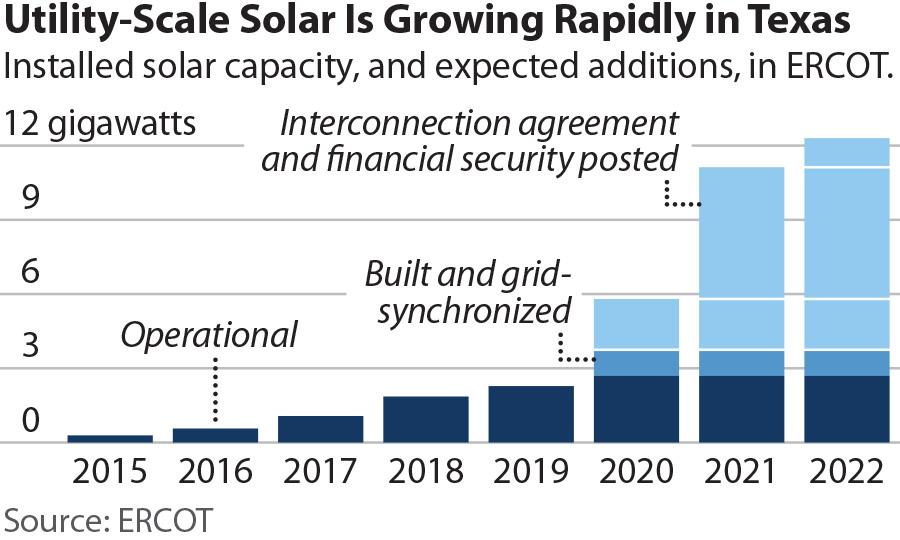 July 14, 2020 (IEEFA) — New utility-scale solar is poised to push much of the remaining coal-fired power fleet across Texas into retirement in the next few years, finds a new report by the Institute for Energy Economics and Financial Analysis (IEEFA).

The report — Solar Surge Set to Drive Much of Remaining Texas Coal-Fired Fleet Offline — describes the increasing vulnerability of coal plants across the power-generation market managed by the Electricity Reliability Council of Texas (ERCOT), an area that covers most of the state. It sees upward of 70% of daytime coal-fired generation in ERCOT being at risk by 2022.

The report details also how wind-fired generation has set the stage for the rise of utility-scale solar, in effect delivering a one-two punch to a coal fleet that is down to 11 plants and will number 10 by October.

“Coal-fired power generation in Texas, pummeled by clean, no-fuel-cost wind over the past 10 years, is about to be hit by a second wave of competition from renewables as utility-scale solar power stands to gain significant market share over the next few years,” said Dennis Wamsted, an IEEFA analyst and lead author of the report.

“While installed solar power capacity in the U.S. has grown by almost 4,000% over the past 10 years, its growth rate across ERCOT has been even faster, with installed capacity increasing from just 15 megawatts (MW) in 2010 to 2,281MW at the end of 2019, a 15,107% increase,” Wamsted said. “ERCOT’s installed capacity could climb at a comparable rate this year, with current projections showing solar topping 5,800MW by the end of 2020.”

The report concludes that the gathering utility-scale solar surge will irreversibly alter the market’s daily dynamics and drive more coal plants offline by 2025.

“This June, for example, solar generation supplied 4-5% of daytime electricity demand on many occasions,” the report states. “Given its low cost, and given the Texas grid’s energy-only business model, which pays for electricity produced rather than mere generation capacity, solar is gaining—and will continue to gain—market share. This will come at the expense of more costly generation, most likely coal-fired, which will be backed out of the ERCOT generation mix by a comparable amount.”

The report also underscores the importance of the rise in battery-storage technology, which is evolving quickly and is being adopted by a growing number of utilities and independent power producers.

“By enabling companies to store solar-generated power if it is not needed during the daytime, battery storage will allow firms to use that power during higher demand periods, further increasing the amount of at-risk coal-fired generation within ERCOT.”