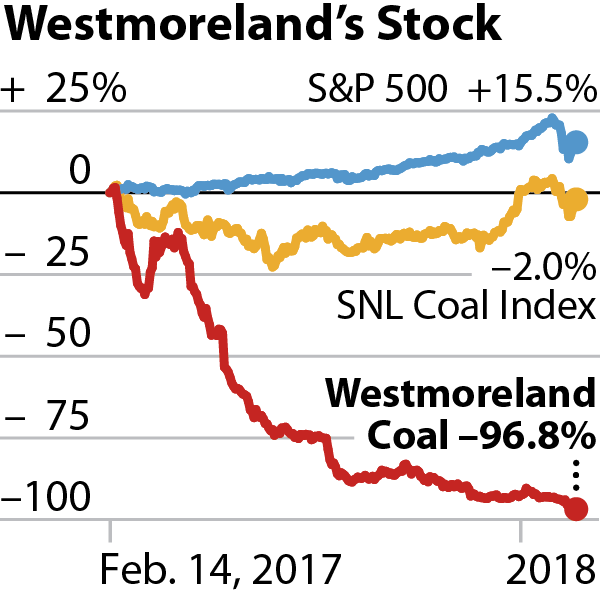 We’ve just published a research brief of interest to any person, community, business, or investor with ties to Westmoreland Coal Co.

The brief—“Westmoreland Coal Is in Trouble”—lays out how the company, which produces coal for electricity generation, is hobbled by debt, is losing customers, has suffered a catastrophic drop in stock price, and appears to be on the verge of bankruptcy.

Our research brief notes that Westmoreland’s market capitalization has dwindled to about $10 million and that the company is buried in some $1.6 billion in debt.

Some additional takeaways, explained more fully in the brief:

The company is in dire straits in no small part because of questionable decisions by management, but also because the U.S. coal industry is in broad decline and facing serious headwinds.

Utilities across the U.S. continue to retire coal-fired units at a rapid pace, cutting heavily into demand for coal. The advanced age of many plants, alongside relatively high maintenance and operating costs, are making them unviable in competitive electric markets, where cheap natural gas and the falling cost of wind and solar generation are relentlessly stealing market share.

The coal mining industry as a whole has not adjusted to this new reality, leading to an intensely competitive, oversupplied thermal coal market with low- or nonexistent profit margins for many producers.

Notably, companies that appear to be doing better than some include those that have recently gone through bankruptcy. 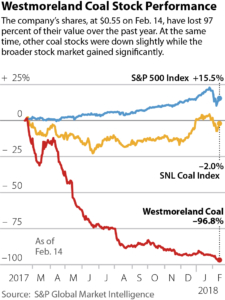 “The company’s current stock price is currently trading around 50 cents a share, reflecting an almost total loss in value over the past year. Westmoreland is well over a billion dollars in debt and faces debt-service costs that will only increase as interest rates rise. Its debt is in junk-bond territory and deteriorating. It continues to report losses, quarter after quarter. Its negotiations with lenders has led it to try to give away assets to avoid default. Intense competition, low prices, and overall falling demand for coal are also buffeting the company.”

“All of these suggest that Westmoreland is in a precarious financial position that stands to adversely affect its business and potentially expose investors, lenders—and, in some instances, ratepayers and taxpayers—to fallout should the company go bankrupt.”

We note also that while Westmoreland has a few customers in Asia, it depends almost entirely on thermal-coal sales in the U.S. and Canada, where an electricity-generation shift toward other sources—natural gas, wind, and solar—is gaining momentum.

Westmoreland Coal is not well-positioned for survival in in its current incarnation as this market shift continues.