IEEFA Update: In Campaign to Prop Up Navajo Generating Station, Peabody Energy Seeks a Victory Again at Somebody Else’s Expense 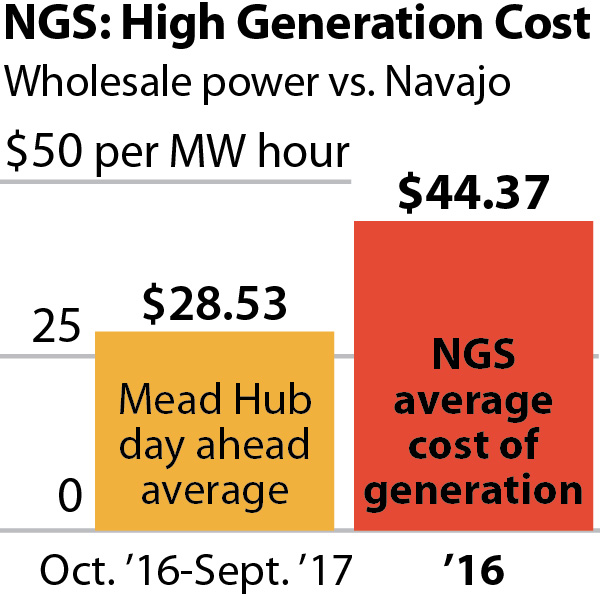 The last time Peabody Energy got involved with developing a new power plant it ended in financial chaos for 200 Midwest communities that had been talked into taking part.

Peabody was the lead proponent of the Prairie State Generating Center in Marisa, Illinois, which opened in 2012 promising cheap electricity for the towns and cities who are left now with a high-priced mess on their hands. Prairie State, ever since opening, has generated electricity at a cost to member communities that most of the times has exceeded market prices and sometimes even been twice the $44 per-megawatt-hour price promised. The deal turned out so bad over time for everybody who has stayed involved that Peabody, recipient of $1 billion project subsidies on Prairie State and the seller of coal to the plan, sold its interests in the project last year, leaving member communities holding the bag. Peabody won. Everybody else lost.

Peabody is at it again with its machinations around the Navajo Generating Station in Arizona. The Associated Press reports this week that Peabody says it is “making progress in the search for new owners,” even though the plant’s current owners have announced a 2019 shutdown because the station cannot compete with less expensive forms of electricity generation.

Peabody evidently is banking on getting a federal subsidy to pay for a “clean coal” gasification retrofit of some kind, a pie-in-the-sky scheme that won’t work. Our research on such technologies, employed at the Kemper County Power Plant in Mississippi and at Edwardsport Power Station in Indiana show that “clean coal” power generation is not viable without the aid of massive ratepayer and taxpayer subsidies.

Market-viable power sources like wind, solar and natural gas do not need subsidies like the kind Peabody is seeking.

TO PROMOTE ITS NEW DEAL IN ARIZONA,  Peabody is putting out calculated misinformation on recent power prices in the Southwest and on the recent operating performance of Navajo Generating Station (NGS), which buys its coal from Peabody.

Peabody, in asserting that “regional power prices have surged to an average of 90 percent above 2016 levels,” offers no supporting evidence for the claim.

While power prices at the Mead Hub, where power from NGS would be sold, indicate that prices in 2017 might be higher than they were in 2016, they have certainly not been 90 percent higher than 2016 prices for any meaningful period of time (more on that below). In fact, market prices over any period in question outside a few cherry-picked hours show why NGS is no longer viable.

It is clear from this figure that the monthly prices of power at the Mead Hub for the first nine months of 2017 were higher than in 2016—but that at no point in  2017 did power prices “surge” to 90 percent higher than they were in 2016.

Indeed, as shown in Figure 2, below, average monthly prices at the Mead Hub in the first nine months of 2017 were just 24 percent higher than prices were in the same months in 2016. During no month were prices 90 percent higher. 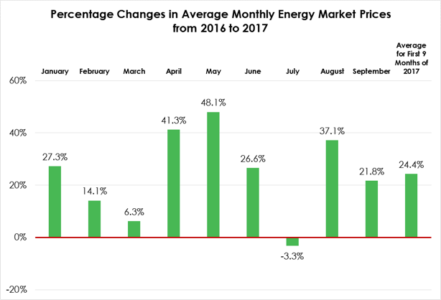 Figure 3 shows comparative  changes in power prices between 2016 and the most recent 12-month period (October 2016 through September 2017). 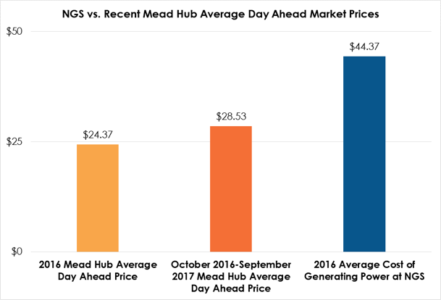 PEABODY CLAIMS FURTHER, AND AGAIN WITHOUT SUPPORTING EVIDENCE, that NGS  “recently has been running at about an 80 percent capacity factor.” This assertion is just as misleading as the ones the company makes on power price comparisons.

Of crucial note: Although NGS’s capacity factor improved from 60.9 percent in 2016 to 68.4 percent in the 12-month period ending July 2017, its total generation is down almost 6 million megawatt-hours, or by about one-third, since 2014.

NGS’s annual generation will likely either remain at this level or decline even further as competition from renewable resources rises and as natural gas prices will remain low for the foreseeable future.

THE CONCLUSION WE REACHED IN OUR MAY 2017 REPORT, “End of an Era, Navajo Generating Station Is No Longer Economic” remain the same.

Even though forward prices for the Mead Hub have increased since last spring, they are still significantly below the likely cost of NGS power as shown in Figure 7, below. 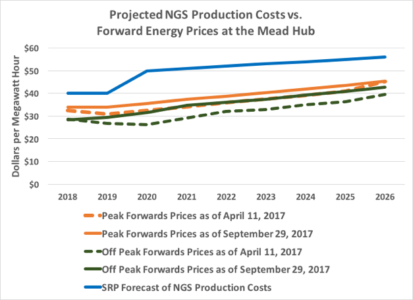 This means that no owner of Navajo Generating Station will be able to fully recover their costs, let alone cover debt service or make any return on their investment in purchasing the plant.

Our conclusion that bailouts in the range of hundreds of millions to billions of dollars would be needed in order to keep the plant open is unchanged.

While Peabody is promoting its “clean coal” scheme around Navajo Generating Station, it is telling its own investors another story.

In a recent SEC filing, the company says that the U.S. will lose 10 gigawatts of coal plant capacity annually as times goes by, and that Peabody itself will see coal production decline.

In the same filing, the company informs its investors that it has no capital to acquire new reserves for almost a decade and that the market anyway for new coal reserves is non-existent as coal plants continue to close and natural gas and renewables take electricity market share.

This filing has Peabody saying one thing while it tells the Navajo Nation something else.

We expect, as this plays out, that Peabody will do what it did at Prairie State in three shrewd steps: Take federal subsidy money, run, leave the locals in the lurch.


IEEFA Report: ‘End of an Era’ for Navajo Generating Station; Vast Subsidies Would Be Required to Keep Aging Plant Online; Retirement Seen as Most Viable Option

IEEFA Swamp Watch: Will a New Federal Giveaway Keep a Mine Alive in Arizona?