IEEFA: Repurposing coal plants into solar and battery can pay up to 5 times more than decommissioning 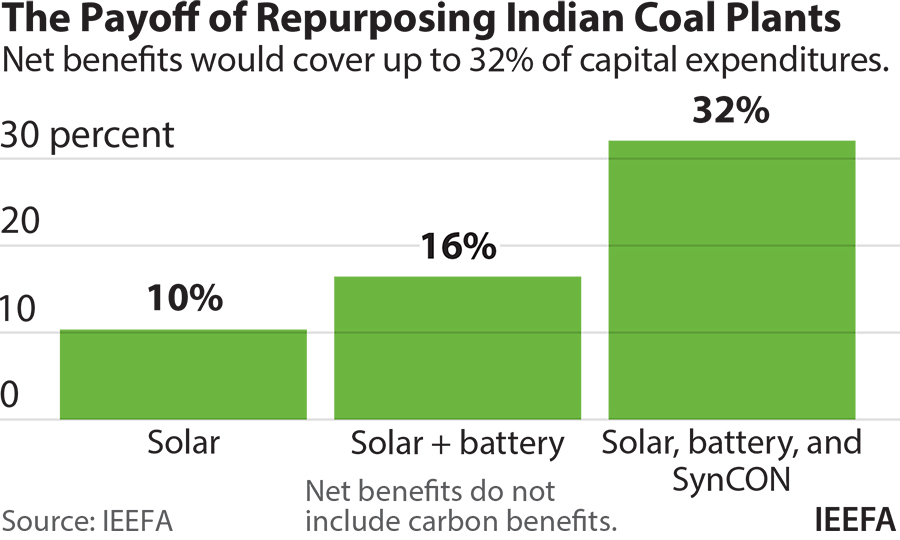 Worldwide, coal plants are grappling with environmental issues and low capacity utilization levels. They have not only become unprofitable to utilities, they are also uneconomical to customers. While retiring end-of-life coal plants can overall be very beneficial, and indeed necessary as finance continues to exit the fossil fuel sector driven by the global energy transition, the execution may encounter resistance for several reasons such as costs involved, identification of plants, impact on the existing workforce and hence communities, and other system flexibility considerations.

We suggest retirements can be better rationalized with a clear empirical estimation of costs and benefits incurred in decommissioning plants vis-à-vis repurposing them.

First, repurposing reduces decommissioning costs because it avoids some of the environmental remediation requirements and allows partial re-use of existing assets such as the degraded land, as well as the generators, substations and grid connections. Second, it reduces the cost of commissioning greenfield renewable capacity at the same site. Third, for coal plants located in urban and semi-urban areas, repurposing manifests in multiple end uses leading to economic diversification and industrial rejuvenation, benefiting local economies and the workforce. Fourth, it could provide a lucrative exit strategy for stranded and stressed coal plants. And fifth, repurposing coal plant equipment (e.g. the turbo-generator) allows for retaining a part of the reactive power service for voltage control originally provided by the coal plant, a valuable service when rapidly adding renewable energy.

Developing countries such as South Africa, Chile and India may gain much from the experience of their developed counterparts. Coal has played a major role in meeting the energy needs of these countries to date. However, each of these nations are now witnessing rapidly falling tariffs for renewable energy leading to accelerated penetration of renewable energy based generation into their grids, while the energy cost of coal-based generation has remained high in comparison, making its’ dispatch economically less feasible. As these countries look forward to altering their carbon footprints, repurposing considerably addresses the potential resistance to the decommissioning of coal plants, and the benefits of early coal plant retirement could create a source of funds for new renewable energy projects.

In order to serve as a blueprint, we examined the value proposition of repurposing using a representative 1 gigawatt (GW) Indian coal plant as a case study. Compared to similar analyses in developed countries, we believe our analysis can be useful to other developing countries with significant coal capacities. For example, in comparison to the U.S., decommissioning cost estimates for Indian plants are rather low; while the mean decommissioning costs in the U.S. are US$117m/GW, in India they are nearly half that at around US$58m/GW.

Compared to the U.S., decommissioning cost estimates for Indian plants are rather low

We calculated the present value of underlying costs, benefits, and net benefits (i.e. benefits minus costs) of repurposing coal plants for appropriate combinations of three potentially popular repurposing options – solar power, solar and battery storage, and solar and battery storage with a synchronous condenser. While the energy and flexibility value of solar energy and battery storage is well known, synchronous condensers – essentially repurposed turbo-generators from coal plants, can play a key role in providing much needed reactive power even post coal plant retirement.

Our findings are as follows:

Our results highlight the potential economic benefits of approaching end-of-life coal plant repurposing for utilities, the power system and society at large, including enabling the much-needed energy transition from coal to renewable energy in developing countries.

[2] For a comprehensive list of costs and benefits, see: Shrimali G, Jindal A. Cost-benefit analysis of coal-plant repurposing in developing countries. 2020.

IEEFA guest contributor Gireesh Shrimali is a Precourt Scholar at the Sustainable Finance Initiative at Stanford University and a visiting scholar at the Energy Technologies Division at Lawrence Berkeley National Lab and the Center for Climate Finance and Investment at Imperial College. Guest co-author Abhinav Jindal is a PhD Scholar in Economics at Indian Institute of Management, Indore and is working as Senior Manager (Commercial), NTPC Ltd.

Solar is the new ruler of the Indian electricity market

Abhinav Jindal is a PhD Scholar in Economics at Indian Institute of Management, Indore and is working as Senior Manager (Commercial), NTPC Ltd. He was over 16 years’ experience in various areas related with economic and commercial related aspects of Indian power sector. He is a recipient of Karamveer Chakra Puraskar 2012 and REX Karamveer Fellowship 2012.