IEEFA Australia: Origin Energy is not facing the past nor the future 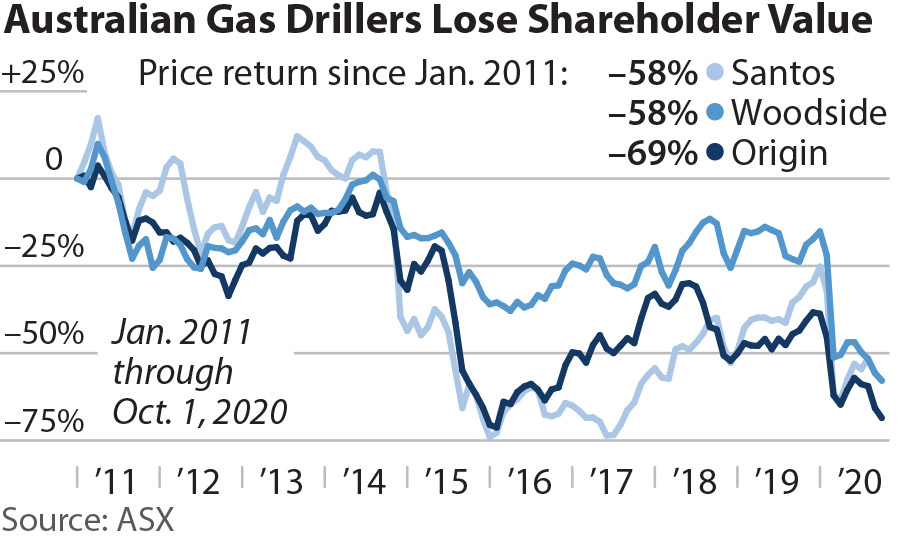 Investors have lost 69% in shareholder value at a time when the market was rising.

Well may Gordon Cairns, the outgoing chairman, lament that Origin’s share price does not reflect its underlying performance. If, however, he took a franker assessment, he would see that the global gas/LNG sector has long term structural issues that are not going away anytime soon.

Australian gas and LNG companies have written off a staggering $25 billionin just the first six months of this year. 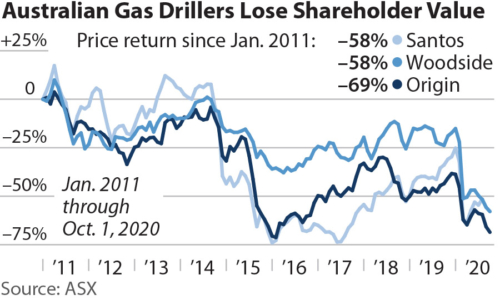 These write offs are part of ongoing write offs that have occurred since 2014. Origin wrote off $4.0 billion in the period 2014 – 2019 on its gas operations. The latest result saw a further three quarters of a billion dollars written off its troubled Coal Seam Gas (CSG) to Liquefied Natural Gas (LNG) assets.

Origin is one of the three leading companies of the three consortium that developed the east coast Australian CSG to export LNG industry. Its’ plant was over budget and its estimates of the costs of production have not met original expectations. The high cost nature of its export business has seen the company struggle to produce returns.

The problems in the industry are not confined to Origin. It has fared better than Santos whose write offs on their failed CSG to LNG assets at Gladstone, Queensland, total $7 billion since 2014. Shell has seen over $12 billion written off its floating LNG plant Prelude off the coast of Western Australia and its failed CSG investment on the east coast. And Inpex has written down the value of its troubled offshore Northern Territory investments by $1.8 billion.

The problems in the industry are not confined to Origin.

There is a sea of gas and LNG red ink right around the country.

The outlook for further investment in Australian gas is gloomy, to say the least.

Returns from LNG are threatened by Qatar’s move to increase production at the very time the world is awash with gas and prices are at rock bottom. Qatar is by far the lowest cost producer of LNG and it can make money when others are losing their shirts. 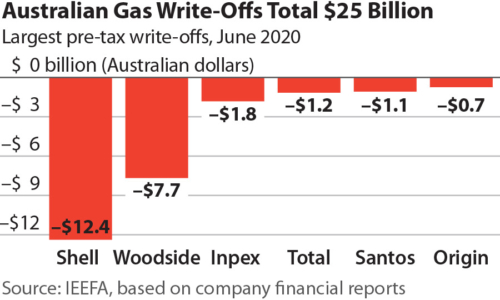 Qatar had a moratorium on developing it rich North field until its neighbour, Iran, recently decided it was time for LNG development. The field is dissected by an artificial national border and Qatar has been forced into development.

Qatar is the world’s second largest LNG producer (by a whisker). It is looking at a massive 64% increase in production by 2027. To achieve this increase, it has slashed contract LNG prices by 22%. These moves will reverberate around the globe, threatening the higher cost producers, including those in Australia.

But back to Origin, which says it is committed to decarbonisation and the Paris climate accord, yet it wants to open up massive new gas fields in the Northern Territory. The two aims are mutually exclusive; the Paris goals cannot be met while increasing the production of gas. Origin supports the Australian governments’ plan to open up new gas basins in contravention of the Paris climate accord, and is ignoring the poor returns likely to be received in a world awash with gas.

These moves will reverberate around the globe

International pressure on climate commitments is also rising with China recently increasing its Paris climate goals. China is one of Australia’s major gas customers and Origin’s largest export customer. China will look to reduce emissions in its coming 5-year plan.

LNG is a high emitting fuel; just to liquefy and ship LNG takes up 13% of the gas that enters the plant. China will favour domestic sources of gas and imports from Russia and Central Asia over Australia, as these are lower emitting sources.

Europe already has strong climate commitments and is looking to tighten its regulations surrounding gas.

If the Democrats gain the White House, all three major trading blocs will have strong climate policies.

Origin’s gas assets have had a troubled past and face an uncertain future. The lack of clarity on this issue by the board of Origin has seen shareholder wealth destroyed and will continue to see further shareholder wealth erosion.

It’s time for Origin to admit the mistakes of the past, its uncertain future, and to develop a strategy to cope with what lies ahead.

What Australia can learn from Texas’ embrace of clean energy

When investors won’t back gas, why should taxpayers?