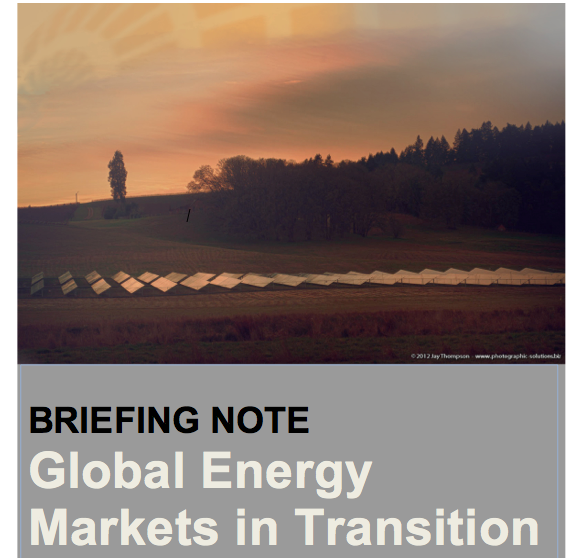 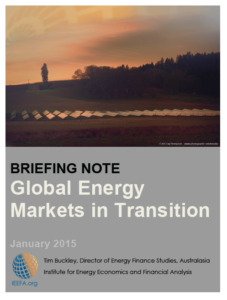 CLEVELAND, Jan. 14, 2015 (IEEFA.org) — Rapid expansion of renewable energy combined with weakening electricity demand are driving a structural decline in seaborne thermal coal markets, according to a new briefing released today by the Institute for Energy Economics and Financial Analysis (IEEFA).

The report, “Global Energy Markets in Transition,” examines major global electricity-sector trends, focusing on the unprecedented take-up of renewable energy in 2014 and its broader impacts.

The briefing, by Tim Buckley, IEEFA’s director of energy finance studies, Australasia, notes that global installs of solar capacity in 2014 rose by more than 20 percent to a record 46-48 gigawatts (GW) – enough energy to supply about 16 million homes. New global wind installs grew 40 percent to 46 GW, led by China and America.

“Globally, 2014 was the year of the renewable energy installation juggernaut,” said Buckley. “With the notable exception of Australia, where policy uncertainty served as an effective hand-brake, wherever you look around the globe, be it China, India, Europe or the U.S., the trend of a rapidly-expanding renewable energy industry is the same. 2015 will inevitably see this gather pace.”
The report notes also that the 12 percent increase in global renewable investments in 2014 belies a 30 percent growth in global volume compared to 2013.
“The deflationary nature of renewables is driving the kind of transition rarely seen in industry,” said Buckley. “The reality is that in terms of solar installations alone, we are likely to see a 5-10 percent reduction in price annually over the next decade. The impact of this on the electricity market cannot be overstated.”
The effects of renewable growth are being felt most keenly in the global coal sector, particularly in the structural decline of seaborne thermal coal.

“Coal companies’ underperformance against the global equity market is unprecedented,” said Buckley. “A more than 50 percent decline in coal prices has seen most listed coal companies globally lose 80-90 percent of their equity market value in the last four years. While the sun will undoubtedly rise for renewable energy in 2015, for coal, there remains a lot further to fall.”
Full report
_____________________

Tim Buckley, IEEFA’s director of energy finance studies, Australasia, has 25 years of financial markets experience, including 17 years with Citigroup, where he was managing director and head of Australasian equity research. Buckley has produced detailed reports on Lanco Infratech, GVK and Adani, and the Indian electricity sector.