The utility industry is embracing fundamental transition across the electricity-generation sector.

Coal’s share of power generation will fall to 27 percent next year, down from 39 percent in 2014.

Wind generation, with no fuel cost, and naturalgas-fired plants, which can respond quickly to demand, are pushing coal aside.

This year will most likely see a record set for coal-fired power capacity retirements in the U.S.

IEEFA expects a total of 15.4 gigawatts (GW) of capacity to close in 2018 through the retirement of 44 units at 22 plants in more than a dozen states.

At least 11GW have already been closed this year, and the retirement trend is on pace to easily exceed the record 14.7GW of coal-fired generation capacity closed in 2015. 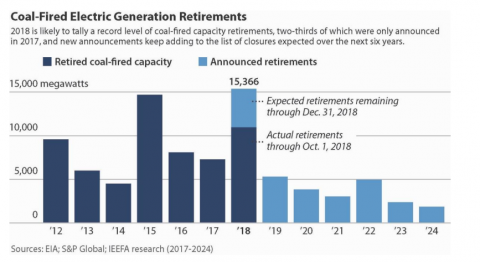 At the same time, the pace of announcements of future retirements remains brisk.

As of Oct. 24, according to IEEFA’s analysis, an additional 21.4GW of U.S. coal-fired capacity is now set close over the next six years.

IEEFA expects this total to rise significantly. Fully two-thirds of 2018’s retirements were only announced in 2017, a clear indication that utilities have shortened their lead time before closures, and the competitive environment for coal-fired power in the generation marketplace is becoming ever more challenging as the price of renewables continues to fall and as natural gas prices are expected to remain low for the foreseeable future. 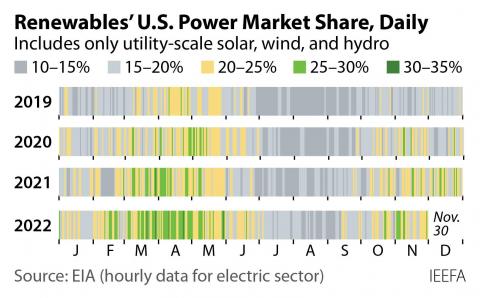