Last week was a momentous one in the U.S. utility sector’s transition from fossil fuels to renewable power generation. Utilities in three states announced plans to close one or more of their coal plants and build new renewables—without adding any new gas-fired generation to serve as a “bridge.”

Two of the three proposals, from Tucson Electric Power (TEP), in Arizona, and Colorado Springs Utilities (CSU), are part of comprehensive resource plans that outline the two companies’ intentions to transition to lower-carbon generation resources. Such plans have become increasingly common across the U.S. utility sector, but the TEP and CSU proposals are markedly different as they do not rely on the construction of new gas-fired generation to support the transition. The third proposal, an agreement between JEA, the municipal utility serving Jacksonville, Fla., and Florida Power & Light, will rely on existing gas and new solar to enable the companies to retire the 860 megawatt (MW) Unit 4 at Plant Scherer, which is the largest coal-fired power plant in the U.S. with a combined operating capacity of 3,440MW.

TEP’s proposal, included in its 2020 integrated resource plan, calls for the closure of all its coal-fired generation by 2031, which will result in the shuttering of Units 1 and 2 at the Springerville Generating Station. TEP owns 100% of those units, which have a combined summer generation capacity of 793MW; it also serves as the operator of the entire four-unit plant. Unit 3 is owned by Tri-State Generation and Transmission Association, and Unit 4 is owned by the Salt River Project. TEP also owns portions of the San Juan Generating Station and the Four Corners Power Plant in New Mexico, both of which already had announced closure dates of 2022 and 2031, respectively.

To replace this capacity, TEP said, it will add 2,457MW of new wind and solar generation, including 457MW within the coming year. It will also add 1,400MW of battery storage to its portfoliio to firm its new renewable generation resources and provide system-wide reliability.

What the company is decidedly not proposing is any new gas-fired generation: “Even with the future planned retirement of 1,073MW of coal capacity and 225MW of natural gas capacity, TEP’s Preferred Portfolio does not inlcude the addition of any new fossil-fuel resources,” the company wrote. 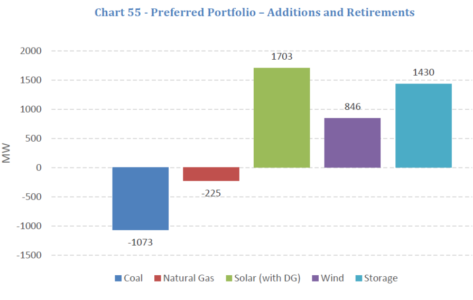 It is worth noting that Springerville is not an old coal station. TEP’s two Springerville units came online in 1985 and 1990, and have been strong performers. Unit 1’s capacity factor over the past seven years has averaged 67.9% while Unit 2 has been even higher at 73.4%—both well above the national average of 54.4%. Still, as TEP acknowledged in its IRP, “the economics of coal-fired generation have shifted…they are no longer the lowest cost resources for energy supply.”

Up until recently, the easy option for utilities would have been to propose using gas to replace coal. But not any longer: Rising concerns about climate change and continuing  reductions in wind, solar and battery storage costs coupled with improved performance have altered the playing field. TEP’s plan charts a new path, promising to cut its carbon dioxide emissions by 80 percent by 2035 while keeping costs low and supply reliable through its planned renewable energy buildout.

Reductions in the cost of wind, solar and batteries have altered the playing field

“We’re accelerating our transition to cleaner energy resources through a cost-effective plan that supports reliable and affordable service from increasingly sustainable resources,” Tuscon Electric Power CEO David Hutchens said when the plan was released. “We’ll be reducing carbon emissions at a pace that places us at the forefront of global efforts to combat climate change.”

The plan put forward by Colorado Springs Utilities follows a similar approach. There, the utility board approved plans to exit coal-fired generation entirely by 2030, helping to achieve an 80 percent reduction in its carbon emissions in the coming decade. Under the plan, CSU will close the 208MW Martin Drake Power Plant no later than 2023 and the similarly sized Ray Nixon plant in 2030.

As with TEP, Colorado Springs will replace the lost coal capacity with renewable energy resources. Specifically, the utility’s plan calls for the construction of 500MW of new wind generation, 150MW of solar and more than 400MW of battery storage capacity. To enable the early retirement of the Drake plant, the utility acknowledged that it will install temporary natural gas generators at the site “to ensure system reliability.” But those units will be removed  as new transmission projects are completed in the years ahead.

The agreement struck between FPL, a subsidiary of NextEra Energy, and JEA is an outgrowth of the Florida utility’s long-term goal to exit coal-fired generation. FPL owns 76.4% of Scherer Unit 4 while JEA owns the remainder. FPL told Florida regulators in its 10-year site plan filed in April that it intended to retire its share of the 31-year-old unit by January 2022, essentially forcing JEA to act.

JEA could have sought out a new partner for the unit, and according to published reports there was some interest among financiers. But that option did not appeal to JEA’s leadership, as JEA Vice Chairman Robert Stein pointed out when the retirement deal was announced: “We would be a minority partner with a hedge fund, and their interestes were not in line with us.”

Probably more important is that Scherer simply is no longer economic, as JEA acting CEO Paul McElroy noted in materials presented to the utility’s board of directors. “While the Scherer units have long been low-cost generating units, changes in the natural gas market now make Scherer the highest-cost dispatch unit in JEA’s fleet.”

To replace JEA’s 198MW share of the unit’s output, the two utilities signed a long-term, fixed price power purchase agreement under which FPL will sell electricity to JEA from one of its existing gas-fired generation units. The agreement includes an option at the 10-year mark for JEA to switch to solar power.

As with the TEP and CSU announcements, this agreement does not depend on any new gas-fired generation being built—either by FPL or JEA—despite the sizable amount of generation being taken offline. Much of the reason for that, in turn, is the roughly 7,300MW of new solar capacity FPL is planning to build in its service territory through 2029. The utility has several gas plant upgrades planned for the years ahead, but a large new combined-cycle plant that had been in previous 10-year plans for completion in 2026 has been removed from the 2020 submission.

FINALLY, A PLAN PUT FORTH LAST WEEK BY STAFF AT THE NEW MEXICO PUBLIC REGULATION COMMISSION REGARDING THE FUTURE CAPACITY NEEDS OF PUBLIC SERVICE COMPANY OF NEW MEXICO (PNM) recommends a simlar gas-free transition. The plan is different from the ones in Arizona, Colorado, and Florida in that it is being promoted by regulators rather than utility companies, but it stands to have the same effect. It is meant to ensure the utility has sufficient capacity resources following its planned retirement of the remaining two units at the San Juan Generating Station in 2022. PNM owns 560MW of the plant’s 847MW capacity.

While the PNM decision remains unresolved, what is clear is that transitioning from coal to renewables can be done now, cost effectively and reliably, without an interim shift to gas.