IEEFA U.S.: Renewables will likely outpace coal for the entire second quarter of 2019

It’s in the books: Utility-scale renewable resources in the U.S. generated more electricity than coal for the first time in April—and the trend will likely persist through the entire second quarter of this year.

If the projection comes to pass, it would mark the first time renewables have outpaced coal-fired generation in the U.S. on a quarterly basis.

The totals for the milestone month of April—predicted one month ago and registered formally this week by the Energy Information Administration (EIA) were: 68,481 thousand megawatt-hours (MWh) of generation for renewables (including wind, solar, hydro, geothermal and biomass) and 60,099 thousand MWh for coal.

These numbers add to evidence of a fundamental shift described by the EIA in its latest Short-Term Energy Forecast, published on June 11, which contains significant notes that lie beneath the headline takeaways in the agency’s elaborate presentation of information:

The formal April result was projected by the EIA in its Energy Outlook and discussed in an IEEFA research note (“IEEFA U.S.: April is shaping up to be momentous in transition from coal to renewables”). The April totals were not made officials until this month with the release of the EIA’s Electric Power Monthly. 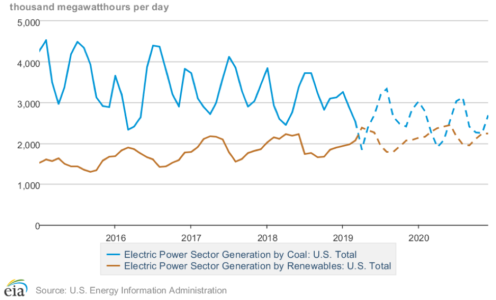 SPECIFICALLY, THE EIA ESTIMATES THAT RENEWABLE GENERATION FROM APRIL THROUGH JUNE will average 2,324 MWh per day while coal will total 2,301 MWh/day. As we noted in April, this is just a projection, and the official numbers won’t be available for another couple of months, but the prediction itself is noteworthy. Just four years ago, coal was still the leading electricity generation source, with renewables placing a relatively distant fourth (behind natural gas, nuclear and coal); if one had predicted then that renewables would top coal for second place in overall electricity generation—even if for only a quarter—it would have elicited guffaws of disbelief from most energy observers.

Now, with changes sweeping through the sector, that prediction has the ring of inevitability. The forecast indeed may not pan out this quarter, but as companies continue to shutter their coal plants, reduce the output of the plants that remain online, and bring new renewables, natural gas and, increasingly, storage resources onto the grid, a long-term crossover point is coming, and there is reason to believe it is coming soon.

The crossover is occurring a bit sooner in the competitive Texas electricity market, a point also highlighted in our previous post. Through the first five months of 2019, wind by itself  generated more electricity than coal—a first for the state. All told, wind farms within the footprint of Electric Reliability Council of Texas (ERCOT), the wholesale transmission operator that manages 90 percent of the state’s electric load, have produced 32,947,483 MWh of electricity, accounting for 23.1% of ERCOT demand during the period. Coal, by contrast, has generated 30,825,294 MWh (21.6% of demand).

Add solar to the mix in Texas—as is happening now—and the contrast is even more pronounced. To date in 2019, solar farms in ERCOT have generated 1,539,486 MWh, accounting for 1.1% of overall demand. While this is still a relatively small amount, solar’s share is growing fast and will account for a rising segment of generation, putting further pressure on coal generation.

As in Texas, generation queues across the country are filled with proposed solar, wind and storage projects, and low-priced natural gas is projected to persist long into the future. In this scenario, coal doesn’t stand a chance.

THESE RECENT GOVERNMENT NUMBERS AND PROJECTIONS COLLECTIVELY HIGHLIGHT THE RAPID CHANGE UNDER WAY in the U.S. electric generation sector, where natural gas and renewables are fast displacing coal-fired output. The decline of coal was so pronounced in April, in fact, that even the beleaguered nuclear power sector out-generated coal by a small amount, producing 60,581 thousand MWh.

And they underscore a fundamental shift in how the utility industry in some ways is playing catch-up with itself as a new epoch of power generation evolves in fast-moving developments that include the geographically widespread adoption of new storage technology, as described in an IEEFA report published earlier this month.

Transition is happening so fast and furious that even top industry executives are having trouble keeping up.

“There is enormous change coming in this industry,” Jim Robo, the president of NextEra Energy, which has a presence in 36 states, said in remarks published last week by S&P Global Market Intelligence. “I don’t think the industry really has come to grips with it.”

Dennis Wamsted ([email protected]) is an IEEFA analyst and editor.

IEEFA U.S.: April is shaping up to be momentous in transition from coal to renewables
IEEFA report: Advances in electricity storage suggest rapid disruption of U.S. electricity sector
IEEFA update: Out-to-pasture coal plants are being repurposed into new economic endeavors