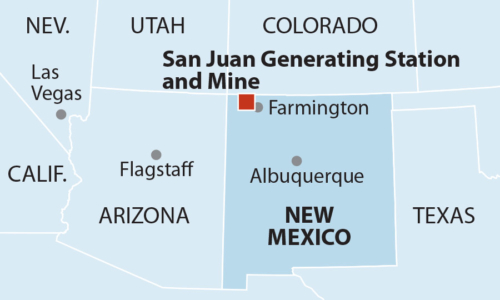 A far-fetched proposal by a novice company called Enchant Energy to retrofit the 847‑megawatt San Juan Generating Station with carbon capture equipment rests on the assumption that it would be able to sell the carbon dioxide (CO2) to the oil industry for enhanced oil recovery (EOR) activities.

It was a long-shot assumption to begin with, and this week’s oil price crash highlights the weakness in Enchant’s business model. Enchant executives seem undeterred, however, and are now talking up long-term underground carbon storage in northwestern New Mexico, a proposition that stands to be as economically unfeasible as the company’s miscalculations regarding the EOR market. Enchant executives also now appear to be targeting tribal communities to take on these high-risk projects.

No price recovery is in sight, with WTI trading yesterday at only $23 per barrel

The price for West Texas Intermediate (WTI) crude oil, the U.S. benchmark, for most of the past year traded in a fairly narrow range from the low $50s to the low $60s per barrel—until the Saudi Arabian-Russian price war began. That development, coupled with growing concern over the broader economic impact of the coronavirus, pushed the price of WTI from its most recent peak of $53.88/bbl on Feb. 20 to just over $20/bbl at the close of trading on March 18—an 18-year low. No price recovery is in sight, with WTI trading yesterday at only $23 and futures contracts indicating more of the same.

AT THOSE LEVELS, EVEN THE MOST EFFICIENT U.S. OIL PRODUCERS ARE HARD-PRESSED TO TURN A PROFIT, and EOR activities are completely out of the money. Vello Kuuskraa, an EOR expert who heads up Advanced Resources International, was quoted last year as saying it costs between $55-$60 per barrel to produce oil from conventional U.S. oil fields using EOR. That’s a far cry from $23.

There is little likelihood of a quick turnaround in prices either. Demand reductions linked to the coronavirus are likely to persist for some time and neither Saudi Arabia nor Russia seem inclined now to work out a truce in their dispute. All this means is that the viability of the EOR-dependent economics of the San Juan CCS retrofit are worse than ever.

Beyond this, there is significant uncertainty over which companies might be interested in partnering with Enchant. The country’s largest EOR operator is Occidental Petroleum, which would seemingly make for a natural partner given its extensive operations in the Permian Basin in West Texas, the oil resource closest to the San Juan plant, which is hundreds of miles away. But Occidental’s stock—like that of oil companies across the board—is under siege. It has plunged from $42.97 a share on Feb. 20 to barely $10. To prepare for leaner times, the company on March 10 slashed its dividend to $0.11 a share from $0.79 a share—the first time it has reduced its dividend in 30 years. The same day, the company announced plans to cut 2020 capital spending to no more than $3.7 billion, down from the previously set level of roughly $5.3 billion. Still, on March 19, Moody’s Investors Services downgraded Occidental debt to junk-bond status.

All this follows a 2019 Occidental investor presentation noting that if the WTI price dropped to $40 a barrel, the company would be able to maintain its dividend and existing production but that there would be no growth. Current oil prices suggest not only no growth, but negative growth, also known as shrinkage.

Given all of the above, expecting Occidental (or any company involved in EOR activities in the Permian Basin) to commit now or anytime in the foreseeable future to a long-term offtake contract for CO2 at a fixed price suggests that Enchant is either out of touch with real-world economics or simply ignoring the hard facts.

The company needs to sell CO2 in huge volumes to make its business plan for the San Juan retrofit pencil out: Specifically, Enchant says it will capture 6 million metric tons of CO2 annually and be able to sell it into the EOR market for between $15 and $20 per metric ton, bringing in at least $90 million in revenue a year for the life of the project.

THE COMPANY WAS STICKING TO ITS PROJECTIONS AS RECENTLY AS MARCH 5 in a presentation to tribal energy groups in Las Vegas, where its executives also laid out plans for how the company imagines piping San Juan CO2 into the ground somewhere nearby and that the proximate Four Corners Power Plant could somehow be profitably retrofitted for carbon capture too. The presentation was clearly aimed at drumming up support among the region’s Native American communities, which have been particularly hard hit by the fast-moving collapse of the U.S. coal industry. While the economic hardships are real, they do not make Enchant’s proposals any more viable.

IEEFA examined the company’s overly optimistic assumptions around retrofitting San Juan in a February report (Enchant’s Proposed CCS Project at the San Juan Generating Station: False Promises and Major Risks), concluding that because of the volatility of oil prices it was likely that both the demand and price for captured CO2 for use in EOR would fluctuate significantly, undermining the business case for the project. The events of the past couple of weeks bring home that very risk and underscore the fundamental financial danger in basing the economics of any large capital project on such an unstable commodity.

Potential investors in the San Juan project would be well-advised to carefully weigh these risks before moving forward.

Dennis Wamsted Is an IEFFA analyst and editor.
Karl Cates is an IEEFA transition policy analyst.