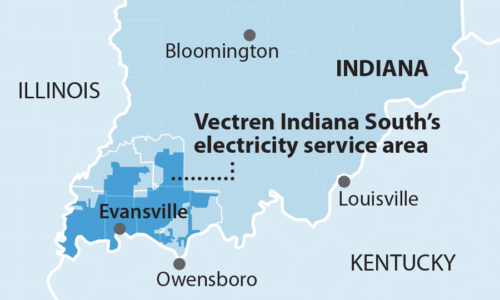 The speed of the utility industry’s embrace of renewable energy and its unwillingness to build costly new fossil fuel generation—gas or coal-fired—is occurring much faster than would have been thought possible just a few years ago.

In 2016, Southern Indiana Gas and Electric (SIGECO) proposed building a 700-megawatt (MW) combined cycle gas turbine (CCGT) plant with an additional 150MW of new gas-fired peaking capacity and just 54MW of solar as its preferred plan to meet its supply needs in the 2020s.

Earlier this month, the company released a request for proposals seeking as much as 1,000MW of new wind, solar and storage for delivery by 2023—and, notably, no new combined cycle gas capacity.

The utility, operated by Vectren South, a subsidiary of Texas-based CenterPoint Energy, also projects—no new baseload gas and sharply reduced coal generation—will be significantly cheaper than other options. Through the end of its latest 20-year forecast, the utility estimates the portfolio’s renewable focus will save customers more than $320 million (in 2018 dollars).

The change in SIGECO’s approach can be traced to a number of factors. The sharp and continuing cost reductions across the renewable energy generation sector clearly have had a major impact on the utility’s attitude. In its December 2016 integrated resource plan (IRP), the utility warned that while it planned to add 54MW of solar as part of its short-term action plan, additional solar capacity beyond that was “uncertain due to policy, technological, economic and a variety of other issues.” Now, it is looking to add hundreds of megawatts of new solar, as well as wind and storage, and saying it will be cheaper, too.

The business risks associated with climate change, particularly the potential that new gas-fired generation assets could be forced to retire well before the end of their useful economic lives, also clearly played a key role in SIGECO’s about-face.

The 2016 plan pushed by SIGECO was built on the industry’s “gas as a bridge fuel” mantra in which gas was seen largely as a plug-in replacement for coal. As a result, SIGECO’s reliance on fossil fuels would have remained largely unchanged through 2036, with coal declining but gas rising significantly and renewables remaining largely an afterthought (see Figure 1 below).

The plan was rejected in April 2019 by state utility regulators, who found that it would leave the utility too dependent on one large-scale generation source and that the proposed new plant could end up being stranded due to the significant technological changes occurring across the industry, particularly regarding renewable energy resources. 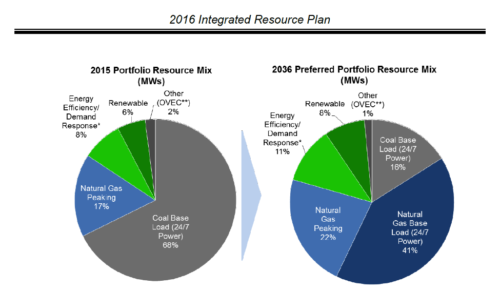 In particular, the regulators criticized the utility for not more thoroughly evaluating the prices of renewable energy options: “There is a lack of evidence that Vectren South [SIGECO’s then-parent company] made a serious effort to determine the price and availability of renewables.”

The Indiana UTILITY Regulatory Commission, in discussing the stranded asset risk associated with the utility’s now outdated proposal on gas-fired power, said, “Our consideration in this and other pre-approval requests, especially in periods of seemingly quickening technological change, must not ignore the risk that any such investment may become uneconomic over the long-term.”

As the company’s new RFP indicates, SIGECO clearly got the message. Its 2019-2020 IRP (which was released in June and can be found here) includes no new “baseload” gas capacity, but instead calls for a significant increase in renewable generation by 2025 (see Figure 2 below). It also significantly speeds up the utility’s planned reduction in its coal-fired generation—pushing coal from 78% of the utility’s capacity in 2020 to just 12% by 2025. 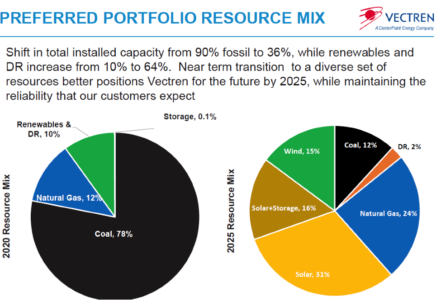 The new plan does call for the construction of two gas-fired combustion turbines (totaling 460MW of capacity), with commercial online dates pegged for 2024. But even with these new gas resources, the utility seems to have embraced a different mindset. In discussing the planned combustion turbines (CTs), for example, the company wrote: “CTs allow time for battery storage technology to continue to become more competitive in price and further develop longer duration storage capabilities.”

Given the rapid price declines in lithium-battery storage technology and the continued development of other, longer-duration storage options, the company’s next IRP in 2022 could very well delete plans for one (or both) of the currently envisioned CTs—just as the IRP that came out this summer moved away from the CCGT in the utility’s 2016 plan.

The bridge to the future is looking greener all the time.