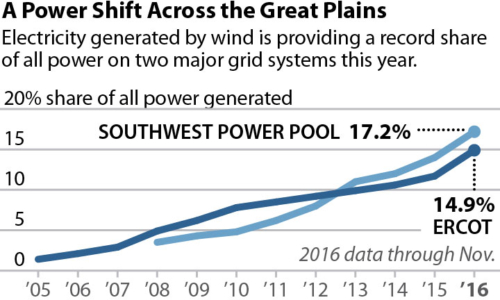 Wind generation has grown by more than 11 million megawatt-hours (MWh) in just a year in the huge ERCOT market of Texas.

This shift is not surprising given that the amount of wind capacity in ERCOT, which includes most of Texas and more than 20 million electricity customers, had reached 17,000 megawatts by the end of October, driven by 1,200 megawatt of new wind-generation installations this year. An additional 2,000 megawatts of wind capacity is expected to come online this month.

It’s part of a trend we described in a report we published in September detailing a historic shift across ERCOT, which is shorthand for the market operated by the Electricity Reliability Council of Texas.

Less than a month ago, on Nov. 28, wind generation produced a record 15,000 megawatts of the electricity used in ERCOT. The record for percentage of the total ERCOT load served by windwas set earlier in the year, on March 23.

This year’s increase in ERCOT follows similar increases in previous years; wind generation in ERCOT has soared by more than 84 percent since 2011. The trend has contributed to a steep decline in coal-fired generation, which provided 27 percent of total electricity generation in ERCOT in the first 11 months of 2016, down from 39 percent in 2011.

And wind’s share of ERCOT electricity generation can be expected to continue to grow significantly in coming years.

A SIMILAR SHIFT IS OCCURING ACROSS THE VAST REGION OF MIDDLE AMERICA SERVED BY THE SOUTHWEST POWER POOL (SPP), an area known also as the Saudi Arabia of wind. It includes all or most of Kansas, Nebraska, North Dakota, Oklahoma, South Dakota, and significants chunks of other states.

SPP reported having more than 12,000 megawatts of wind capacity in service this year, with as much as an additional 4,000 expected to come online soon.

More than 33,000 megawatts of wind projects are in various stages of development across the region, which—as SPP itself has said—has “more potential wind energy in [its] footprint than SPP could absorb.”

It’s an export industry in the making.

As with ERCOT, SPP wind-powered electricity production has surged. Last winter, wind produced 17.7 percent of electricity generated in SPP, a 70 percent increase from two years earlier. This past February, wind provided about 21 percent of SPP electricity, and on a number of occasions this year, wind has provided almost half of the region’s total generation. Overall, wind accounted for more than 17 percent SPP generation in the first 11 months of 2016.

Meanwhile, the amount of power generated by coal-fired generators has fallen. It dropped to 48 percent of the total generation in SPP in the first 11 months of 2016 from more than 62 percent in 2013.

IEEFA Update: For Key Coal-Fired Plants in Texas, the Baseload Party Is Over