LONDON – Market analysts are projecting relentless renewable energy growth in the European Union over the next two decades, but to become a reality, this trend will need to be backed by clear, stable policy, private financing and grid integration solutions. This is especially true for the larger economies, such as Britain, France and Germany, if they are to follow the lead of early movers such as Denmark.

There is no doubt that renewables are the future of power generation in Europe, and worldwide, backed by unstoppable trends including cost reduction, decarbonisation, digitalisation, and the electrification of heat and transport, but the speed of this transition is still up for grabs.

How will wind and solar be financed?

The IEA projection appeared in its World Energy Outlook (WEO), an annual overview of global energy sector trends that features its baseline New Policies Scenario. The IEA has also developed a Sustainable Development Scenario based on the conditions needed to limit average global warming to “well below 2°C,” in line with the Paris Agreement on climate change.

Both IEA scenarios project rapid growth in wind and solar power in the EU, becoming the main source of power generation around 2023 and reaching a 40-44% market share by 2040 (see Figures 1 and 2). 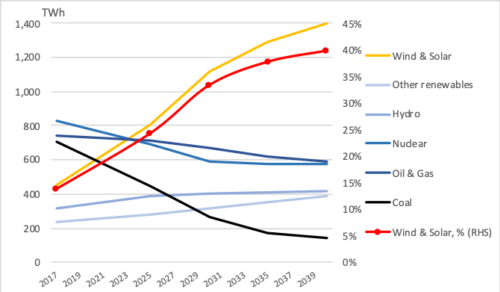 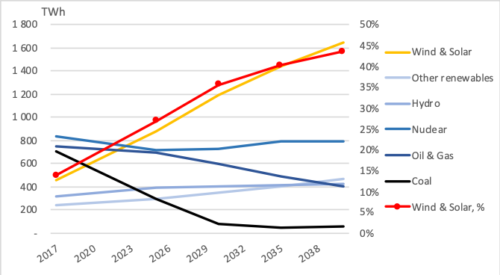 BNEF bases its annual New Energy Outlook on trends in global technology. It foresees an even bigger and faster transition to wind and solar power, to become Europe’s leading source of generation around 2021, reaching a 66% market share by 2040 (see Figure 3). 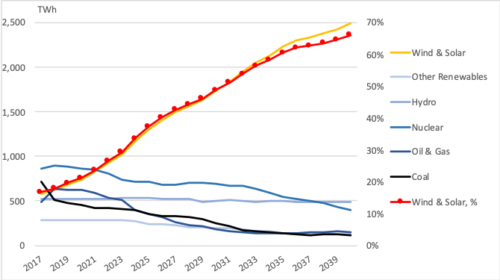 In the past, such projections have often failed to match actual growth in renewables, and solar power in particular. The IEA has a track record of getting it wrong: its latest World Energy Outlook had to revise upwards wind and solar growth projections across the board from the year before. In its 2018 WEO, for example, it upgraded global projected wind and solar under its baseline scenario to 21% market share in 2040, from 19% in its previous estimate, and 32% in Europe, up from 27%.

These repeated projection errors were due to rapid cost reductions in solar power, especially, which caught by surprise both policymakers and market analysts. However, as policymakers begin to withdraw financial support, not least in Europe, a fairer question now is whether such stellar growth will continue, or could analyst projections be overly optimistic?

Achieving renewables growth across the continent will require a methodical approach to boost flexibility, and so buffer the variability of wind and solar power. They must develop markets that support investment in demand-response and electricity storage and internal and cross-border transmission. Charts of trends in energy mix may be visually exciting but they do not capture these vital behind-the-scenes prerequisites, even though they arguably will be as important as quantities of generated electrons going forward.