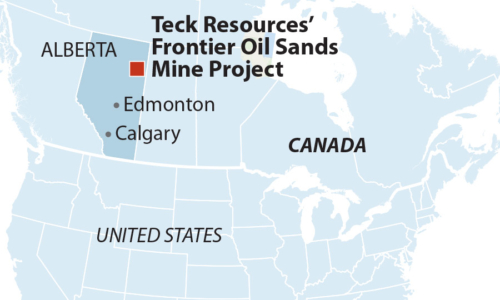 CEO Don Lindsay of Teck Resources in Canada announced this week that his company was withdrawing from the environmental permit process for its $20-billion Frontier oil sands mine project. The business decision is a sound one for the company. The project is too big for Teck, no partners emerged, oil prices are too low and the outlook for the global oil market remains dim. Even the promise of a permit could not turn this bad investment into a good one.

In his letter explaining the decision, Lindsay acknowledged broader reasons for the decision that displayed an extraordinary level of frankness and insight.

First, Lindsay makes clear that the priority of any Canadian is the proper stewardship of the country’s natural resources. When conflicts emerge between natural resource development, environmental regulation and social responsibility, Canadian values require a public discussion about what is best for the country.

Second, climate change poses issues for the country that are bigger than Teck’s project, bigger than those who might oppose it, and bigger than provincial governments’ priorities. A national road map for addressing projects like Frontier is essential. The CEO recognizes that strong climate policies are necessary both from a business and public interest perspective.

Third, the Frontier project was caught in the crosswinds of Canada’s unresolved climate conundrum. The environmental permit process was not the proper forum to move forward with the project while broader climate issues went unresolved. In confronting this specific proposal, the environmental administrative board, the community leaders both for and against the project, Teck executives and the general public did not intend to make larger climate policy decisions for the country. It may be a sign of the times where the only forum open to discussing climate issues are permitting proceedings that have historically been used to resolve natural resource issues. Or, as Lindsay suggests, it may be a sign that new processes are required to finally address climate change.

Fourth, the public-private partnership that has governed natural resource development is no longer reliable – neither for private investment nor for public policymaking. The partnership model that served all parties for years has outlived its usefulness. The shifts in capital markets in response to climate risk and the development of fossil-free investment requires a new way of thinking. For example, the Canadian government’s decision to buy, own, construct and finance the Trans Mountain Pipeline is proving to be an unworkable financial and logistical burden. Approving the Frontier Oil Sands project was risky for the Canadian government – and ultimately its citizens, who might have been forced to pick up the costs of another large, very expensive oil and gas project.

Fifth, the climate issue and its broader impact on the economy and society is a critical challenge that must be faced. Many business leaders in the United States, and some in Canada, have decided that environmental regulation is abusive to the interests of companies that develop fossil fuel reserves. Lindsay’s statement implies that all parties to the conflict are proud Canadians seeking a sound business and climate strategy that balances social and environmental costs.

Lindsay’s statement, at its core, acknowledges there will be no more large-scale oil sands projects for the foreseeable future. He argues that new policy tools could create incentives to promote oil sands development. A low-carbon policy agenda would include legal requirements that such projects are environmentally safe ‒ and rare.

IEEFA maintains that there is no market rationale for the Frontier project ‒ or any new oil sands development. This conclusion is rooted in our ongoing and detailed assessment of oil sands projects, the companies that advance these projects, global oil prices and cost curves.

The government of Norway, another country that generates significant revenues from oil production, offers important thinking on next steps. Rather than seek to extract every last drop of oil, and every last kroner from the industry, the Norwegian government has begun a discussion about what to do as its dependence on oil inevitably wanes. The country is now making plans for more limited production and less dependency on fossil fuels for the future economy and public budgets.

In a similar vein, Lindsay starts his letter on a note of pride at having developed sound working relationships with indigenous groups, labor organizations and provincial leaders. He hopes that his company’s withdrawal from the Frontier mine project will allow more Canadians to engage in a deeper dialogue about climate change and the hard choices ahead.