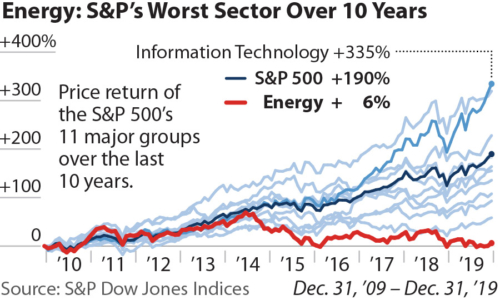 How much of an outlier was energy? The next-worst performing sector, health care, was up 19%. This is the third year straight that the energy sector has finished at or near the bottom of the S&P 500.

The energy sector now commands only 4.3% of the index, down from 25% in the 1980s, when oil and gas companies represented seven of the top 10 companies. Today, there are none, since ExxonMobil, the industry leader, dropped out of the S&P’s top ten last year for the first time in more than 100 years.

Moody’s 2020 oil and gas outlook says the industry is “stable.” Stable is not necessarily a good thing when you are sitting in last place.

Confusion and disarray at ExxonMobil – In March 2017, newly minted CEO Darren Woods declared that his approach to exploration and production (fracking) in the Permian Basin would be to secure quick cash in a short cycle process that would help the company rebound from its doldrums within three years. He made the announcement personally and, together with the company’s senior VP Jack Williams, drove a stake through the heart of former CEO Lee Raymond’s signature achievement: convincing the markets that the oil industry should not be judged through the prism of short-term cash gains. In 2019, Woods deployed Staale Gjervik, XTO’s (Exxon’s fracking arm) president, to state the obvious – the Permian Basin could not produce cash within three years. In fact, Gjervik set no time frame for achieving long-term value creation.

ExxonMobil’s adoption of a long-term strategy feels not so much a return to Raymond’s theory of value creation, but more like management grasping for something to say in the wake of missing another high-stakes benchmark. Others in the industry announced write-downs even during this year of rising oil prices. Will investors have the courage to recognize that ExxonMobil might write down its assets?  The company’s big-bet losses: in the oil sands, Russia and XTO, are noteworthy and the tottering of its Permian venture looms large. The issue for ExxonMobil and the oil and gas industry is that the last round of write-downs came on the heels of crashing prices. Now we see write-downs occurring during a year in which the price of oil increased substantially.

GE hits the skids on failed fossil fuel investments – The company, which is backed by BlackRock, Vanguard and Fidelity, lost $193 billion in share value over three years on a series of gambles related to natural gas and fossil fuel development. GE’s fall from grace rattled the markets in 2019, as it had to acknowledge major missteps in its power unit and in an inability to generate synergies from its purchase of oil services company Baker Hughes.

Saudi Arabia’s IPO overstated Aramco’s value – Much of the international debate surrounding the initial public offering of state-run oil giant Saudi Aramco focused on uncertainty over specific aspects of the transaction.  Overall, Saudi Aramco was just another oil interest seeking to convince the market that its oil and gas reserves were worth more than the market would pay. The opaqueness of the Saudi-run enterprise added to market skittishness over its $2 trillion offering.

This IPO was not a financial transaction. No investment house signed off on the Saudi valuation. No globally-recognized stock market took on the transaction. No investors outside the Persian Gulf were willing to take the risk. Initial investors were not arms-length buyers, but rather had their arms twisted. Even the dividend structure was fraught – too low for the risk, too high for company finances and the fiscal solvency of the Kingdom. The company eventually achieved its $2 trillion goal after four days of trading, but it came with an asterisk. A royal fiat is not a market price.

The transaction has been characterized, correctly by some, as a political ploy by Saudi Crown Prince Mohammed bin Salman to build up his popularity at home positioning himself as a potent problem-solver, and as a leader both in the Middle East (open to the outside, strong enough to retain power) and globally (the head of a $2-trillion company).

Poor performance is well understood by the business press and, presumably, by equity and debt analysts as well. A week does not go by without a prominent story on the financial failures of fracking, the stumblings of oil majors and other tales of woe during this volatile downcycle. Yet almost all heavy institutional investors, led by BlackRock, State Street, Fidelity and Vanguard, remain wedded to these companies, in spite of each quarter bringing new evidence of weak revenues, distressed transactions and a negative outlook.

The financial justification for these investments remains elusive. The BlackRocks, J.P. Morgans and their peers cannot convincingly answer the question of why they continue to be so heavily invested in fossil fuels. Most mutter about passive indexes and diversification, or feign a commitment of accountability to their clients, who apparently are crying out for stakes in an underperforming industry.

In the end, evidence be damned, the prevailing view in a year when the market as a whole went up 29% is, who cares if the sick energy sector came in last? But how long can financial leaders like BlackRock be rewarded with astronomical fees ($18 billion in revenues in 2018) for unproductive, hands-off stratagems that yield shaky results?

Money doesn’t invest itself yet. People do. It is time for energy investors to sit up and act accordingly.

IEEFA update: ExxonMobil’s slide from the Top Ten of the S&P 500 ‒ historic turning point for the company