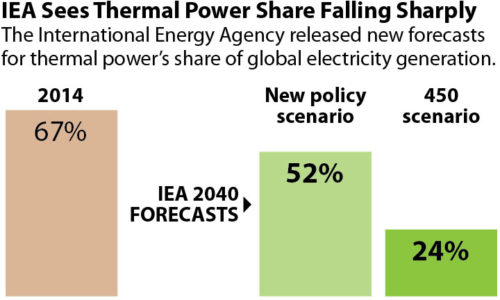 The International Energy Agency, out with its annual energy-markets forecast, “World Energy Outlook 2016,” remains behind the curve but not as far behind as it was.

A history of IEA underestimation of technology change has been partially remedied in this new report, but the agency’s solar and wind forecasts can at best be described still as very conservative. (See our underlying research memo here).

The agency, to its credit, now acknowledges a point IEEFA has long argued, that China passed ‘”peak coal” back in 2013 and, along with India, is accelerating the global transformation from coal to cleaner energy sources, especially solar.

The report includes various “scenarios,” including a “450 scenario,” so named for being “consistent with the goal of limiting the global increase in temperature to 2°C by limiting concentration of greenhouse gases in the atmosphere to around 450 parts per million of CO2.”

This scenario, in other words, would perhaps avert catastrophic climate change.

The 450 scenario has a precipitous fall in thermal power’s share of global electricity generation to just 24 percent by 2040, and it stands in contrast to “current policy,” which has that number at 52 percent.

The lesson here for governments and investors is simple—that those who exit fossil fuels and embrace solar and wind will reap financial rewards and avoid major stranded-asset risks.

This will remain so regardless of recent political upheaval in the U.S. In the unlikely event that short-term tailwinds for the U.S. coal sector continue and a slowdown sets in on renewable energy deployment as a result of the new presidential administration, the IEA analysis shows that emerging economies are now well placed to assume global low-carbon technology leadership.

CHINA AND INDIA WOULD BECOME CLEAN-ENERGY SUPERPOWERS, OUTFLANKING THE U.S., DODGING STRANDED-ASSET RISK and powering their economies with limitless sources of energy. Developments in 2016 suggest that Europe, as well as countries as diverse as Mexico, Taiwan, Chile, and Dubai are increasingly well placed to drive this transformation.

The report, to its credit, also acknowledges the decoupling of economic activity from energy demand growth, largely through the rising impact of energy efficiency.

All of these trends—the rise of renewables, the growing skepticism around fossil fuels, and the increase in energy efficiency are demonstrated most starkly by the rate of change in China’s electricity sector relative to IEA projections.

The IEA has again rightly expanded its assessment of emerging energy markets, and IEA case studies covering India (2015) and Mexico (2016) show how falling costs in implementing these changes have induced more countries to get on board.

The recent entry into force of the Paris Agreement sets a global policy consensus for aggressive transformation, committing governments to more ambitious action than even the IEA’s “450 scenario,” which itself requires transformational outcomes.

Stranded-asset risk in fossil-fuel holdings, then, is clear, present and growing.

A successful implementation of the Paris Agreement means a 60 percent lower usage of thermal electricity generation by 2040 than the world is currently planning for.

IEEFA China: Why the Rally in Coal Prices Is Unsustainable