IEEFA Arizona: Peabody must do the right thing for employees at the Kayenta Mine 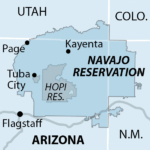 In its latest financial filing Peabody Energy has announced that its Kayenta mine in Arizona will be closing at the end of 2019 due to the loss of its sole customer, the Navajo Generating Station (NGS). The power plant, located on the Navajo reservation 80 miles from the mine, is no longer economically viable, and its owners announced in 2017 that they would shut it down at the end of this year.

Peabody backed some last-ditch efforts to keep the plant open, but no successful business model was advanced.  Community groups and many local leaders are pressing for a speedy transition to renewable energy as more economically sound for the Navajo and Hopi nations.

News reports revealed last month that Peabody Energy had laid off 40 employees at their Kayenta mine in February. The layoffs came with a pink slip and the company’s very good wishes: departing workers deserved better.  Another 300 remained, and Peabody has offered no plan to support these employees into the future or to offer them other employment.

By contrast, SRP, the operator and partial owner of NGS, is doing the right thing by not laying off employees and is trying as much as possible to substitute good wishes with actual job offers. They publicly reported that of 433 employees at the NGS station in 2017, 280 have taken new jobs with SRP, retired or declined offers to be relocated. Some are staying on through the plant’s December closure.

SRP has 5,100 employees and a power generation portfolio containing a dozen or so plants, most of them not running on coal. The other owners of NGS, including the U.S. Bureau of Reclamation, Arizona Public Service and Tucson Electric Power, all have total employment bases that amount to another 14,000 employees.

SRP and the other owners with roots in Arizona recognize their obligation to these employees and remain present and accountable as big changes take place. Peabody, on the other hand, just fires people.

Peabody’s indifference is unsurprising given its long history of shortchanging the Navajo and Hopi nations: withholding royalty payments, forcing the relocations of thousands of families, and of causing the loss and contamination of water supplies due to its mining operations.

In recent months, we have witnessed the company treating their employees as pawns in a game as they sought to postpone the closing of the plant even though the plant had no future. Peabody promoted one false hope after another over a possible bailout of the NGS plant and Kayenta mine, refusing to acknowledge the reality that they were no longer economically viable.

Peabody enlisted investment firm Lazard to find other power plant owners or investors to take over the NGS plant, but the only potentially interested party, Middle River Capital, pulled out, citing the lack of customers for the electricity. And on March 21, the Navajo Nation Council voted not to pursue one final attempt to keep the plant and mine open, bringing to a close a plan by the Navajo Transitional Energy Council to purchase them.

Instead of working with the affected communities to dampen the impact of the inevitable closures, Peabody chose to waste time and create fear among its employees.

We recognize that Peabody and the coal industry as a whole are in a state of decline that is likely to continue. The loss of the Kayenta mine is just one among many losses being experienced by the company.

Peabody, however, possesses considerable enterprise-wide global resources. Recent outcomes from a bankruptcy deal in Australia and a metallurgical coal reserve purchase in Alabama point to the company rebuilding its strength. The company amassed $1.5 billion in cash at the end of 2018 and Kayenta has continued to produce among the strongest margins in its U.S. portfolio, in spite of its certain closing at the end of 2019. Peabody still sees a future for coal because the 700 million ton-per-year coal production in the United States is the third largest in the world. But the company has decided that the Kayenta workers will not be rewarded for their contributions to its global business.

The coal industry has added approximately 2,000 jobs since 2016, not a lot, but enough to begin to think about alternatives for miners that are no longer employed. The company has the resources needed to help solve the employment problem and to promote local economic development strategies. Unfortunately, it seems content to simply take the money and run.

Proposals have been made by local and national organizations showing how Peabody could take the lead in helping out mineworkers by:

Similarly, proposals have been made for Peabody to get together with other non-coal sectors and find employment opportunities for Kayenta workers in the broader economy. After all, mine workers and power plant workers are skilled tradespeople with a lot to offer.

But so far, nothing forward-looking has come from Peabody, apart from threats that if the plant closes, layoffs will occur. They continue to lay blame elsewhere and curse the darkness with vague accusations about environmentalists and economic apocalypse.

Over the last few years many coal companies in the U.S., including Peabody, have declared and reemerged from bankruptcy only to re-emerge, having shed liabilities and debt. Without exception, these bankruptcies were accompanied by generous executive pay packages as part of the bankruptcy deal.  Peabody, Alpha Natural Resources, and Arch Coal all provided executive compensation packages that raised eyebrows, particularly among the mining communities where firings, evaporating tax bases and tough times for small businesses were occurring. Employees, local budgets and outstanding bills owed to local businesses were treated as just so many liabilities the company could sweep under the protective cover of the bankruptcy courts — with the freed-up cash funneled to the same executives whose decisions led to failure.  It really is that clear, that simple and that callous.

Peabody has wasted a lot of time but there is no more time to waste. To show true leadership and good corporate citizenship, the company must change course and offer real support to its employees. They need to work with the union and the Navajo leadership to secure a future for the families affected by the mine closure.  Such an effort could start by acknowledging that recognition for a job well done should be awarded to employees and not corporate management.

IEEFA Update: Lazard Risks Its Reputation by Working With Peabody