Global coal generation fell by a record amount in 2019, while COVID-19 may cause bigger fall in 2020

In the coming months, governments around the globe will pump trillions in public spending to try to stimulate economic recovery. How this money is used will mean the difference between seeing a big rebound in CO2 emissions, or setting the world on a more sustainable pathway through investing in renewables and low-carbon alternatives.

Not yet clear that falling coal generation is the ‘new normal’

A new analysis of 2019 global power generation by climate think tank Ember, shows coal-fired electricity generation, as well as power sector CO2 emissions, recorded the biggest falls in at least thirty years in 2019. Coal generation fell by 3%, and power sector emissions fell by 2%. These results were unexpected and point to a possible acceleration in the ongoing energy transition.

From the evidence, however, it is not yet clear that falling coal generation is the “new normal.” Some of this decline was due to an increase in wind and solar installations. But some can be attributed to one-off factors, such as slower economic growth, coal-to-gas switching in Europe, and nuclear restarts in Japan and South Korea.

Ember has also been tracking the impact of COVID-19 on energy trends. Electricity demand in Hubei province is still down 30% year-on-year two months after the outbreak first struck in China. Italy, the first country in Europe on lockdown, registered a 25% fall in electricity demand last week. China’s total electricity demand in January and February was 8% below last year’s, and thermal (mostly coal) generation was 9% below, although we note a steady rise in electricity demand during March 2020, still below 2019 levels, but much improved relative to the slide in February.

As a result, it is clear that global electricity demand will be materially impacted in 2020 and global coal generation will fall again this year, likely more than the record 3% seen last year.

The 2019 results indicate that the global electricity transition is well underway. Aging coal-fired plants are also being retired in many parts of the world and being replaced steadily with low-carbon alternatives and renewables.

SOLAR AND WIND ARE REACHING A TIPPING POINT, INCREASINGLY COST COMPETITIVE WITHOUT SUBSIDIES AGAINST THE INCUMBENT GENERATORS, which points to renewables becoming mature enough to rapidly scale up. Wind and solar accounted for 8% of global electricity production in 2019, up from only 3% just six years before.

What’s more, solar and wind are not limited to countries with environmentally forward-looking policies. They provided substantial electricity in most countries in the world. In 2019, 8% of India’s electricity was from solar and wind, 9% for China and Japan, 10% for the U.S. and Brazil, 15% for Australia, and 18% for the European Union (EU). Within the EU, wind and solar generation in Germany was 29%, and Spain, Greece and the UK have well over 20%. 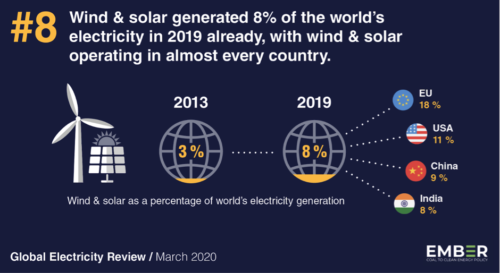 ALTHOUGH ONE-THIRD OF THE DECLINE IN U.S. THERMAL COAL WAS REPLACED WITH SUSTAINABLE WIND AND SOLAR, two-thirds shifted to another only slightly less carbon-intensive fossil fuel – gas. Swapping coal for gas throughout the last 12 years has undermined the greenhouse gas emissions (GHG) benefits of coal’s decline. However, increased energy efficiency has kept U.S. electricity demand flat over the last decade, decoupled from economic growth, a dramatic reminder of energy efficiency’s potential for reducing GHG emissions globally.

Renewables are mature enough to rapidly scale up

By comparison, the decrease in coal generation in the EU was replaced 1:1 with wind and solar which led to a huge 43% fall in power sector emissions.

Coal generation also dropped in India in 2019, falling by 3% or 25 terawatt hours (TWh) as electricity demand growth paused, new solar was added, and hydro experienced bumper conditions. If Prime Minister Narendra Modi’s goal of increasing wind and solar energy to 450GW by 2030 is reached, falling coal generation may become the new normal over the next 5-10 years, even as electricity demand is expected to rise.

Coal generation also fell in South Korea (-5%) and Japan (-4%) due to nuclear restarts and a fall in electricity demand.

Coal generation in the EU and the U.S. is now half the level of 2007

In China, coal generation rose 2%. For the first time, the country was responsible for half of the world’s coal generation. But with the Chinese coal power sector running at an average capacity utilisation of less than 50% nationally, almost half the coal plants in China lost money in 2019, showing the slow-moving but inevitable train wreck of China’s traditional power sector giants.

Although China is building huge amounts of fossil-free generation in wind, solar, hydro and nuclear, the increase in domestic electricity demand is rising so fast that more coal and conventional gas might still be needed to meet that demand.

Since 2015, when the Paris Agreement was signed, China’s coal generation has risen by 17%, whereas coal generation in the rest of the world has fallen by 9%. China is still building coal power plants at a time when China – and most of the world – really does not need them. The Global Energy Monitor’s new 2020 report highlights this in greater detail. 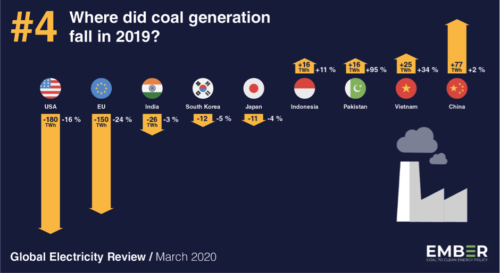 There is growing concern among climate experts that there is a general lack of urgency and focus on reducing coal generation. The world is consequently at high risk of overshooting the Paris goal of containing global warming to 1.5-2.0 degrees Celsius.

Coal-fired electricity generation is responsible for around 30% of fossil fuel CO2 emissions globally, and it needs to see the biggest falls. The Intergovernmental Panel on Climate Change (IPPC) says coal emissions must fall by over 75% in just 10 years. 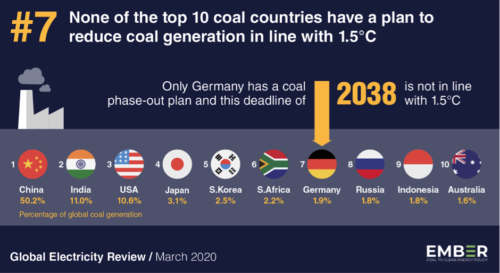 A MASSIVE STEP-UP IN SOLAR AND WIND INVESTMENT IS NEEDED NOW TO RAPIDLY REPLACE COAL GENERATION AND MAINTAIN WARMING BELOW 1.5 DEGREES.

Along with energy efficiency, solar and wind are important investments that policymakers can make now and include in plans to restore their economies.

Solar and wind are mature technologies and commercially competitive with existing supply chains, they can be rapidly scaled up, they are capex-heavy and so will deliver immediate jobs and other benefits, and they will provide long-term cheap, carbon-free electricity which will put the global economy on track to reach long-term sustainability goals.

Dave Jones is the lead author of the “2020 Global Electricity Review.” He has been an electricity analyst for 20 years and is now working as a coal-to-clean analyst at Ember, an independent climate think tank focused on accelerating the global electricity transition.

Japan to reduce coal consumption even while lacking climate action

IEEFA update: Rebound from collapsed oil prices will be low and slow

Dave Jones is the lead author of the “2020 Global Electricity Review”. He has been an electricity analyst for 20 years and is now working as a coal-to-clean analyst at Ember, an independent climate think-tank focused on accelerating the global electricity transition.