The report, posted here, details how the 840-megawatt plant, whose four units are from 44 to 61 years old, has grown increasingly expensive to ratepayers in recent years.

Plant Hammond’s high costs are caused both by a decrease in generation at the plant and by significantly higher variable costs (fuel and non-fuel operations and maintenance). The amount of power generated by the plant has declined precipitously since 2007, when natural gas prices collapsed. As a result, electricity that probably would have been generated by Plant Hammond has been displaced by electricity produced at lower-cost natural gas-fired plants. 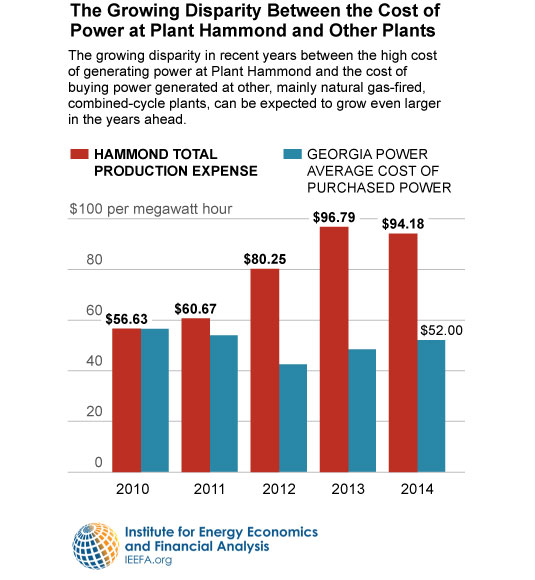 We note also that Plant Hammond is similar to other coal-fired plants Georgia Power has either retired or announced it will retire soon. The plant is hobbled by outdated coal-burning technology, poor operating performance and high production costs. And the power it does produce is much more expensive than electricity available to Georgia Power from other sources, including wind and solar.

While Georgia Power has suggested this plant might be retired as a result of the emission standards mandated by the EPA’s Clean Power Plan, the reality is that Plant Hammond’s weak economics alone are enough to warrant closure.

Georgia Power would be serving its customers best interests by retiring the plant.