Captured carbon has mostly been used for enhanced oil recovery (EOR): enhancing oil production is not a climate solution.

Using carbon capture as a greenlight to extend the life of fossil fuels power plants is a significant financial and technical risk: history confirms this.

Carbon capture’s role has been rejigged as a climate solution in recent years with its diverse applications being proposed to decarbonise fossil fuel plants and hard-to-abate sectors.

Is CCS/CCUS a greenwash to extend the life of fossil fuel assets or a panacea to avert catastrophic climate change consequences?

Some widely cited authorities are fuelling the debate on the role of this technology as a climate solution, including the International Energy Agency in both its Energy Technologies Perspectives report and Net Zero by 2050 report. 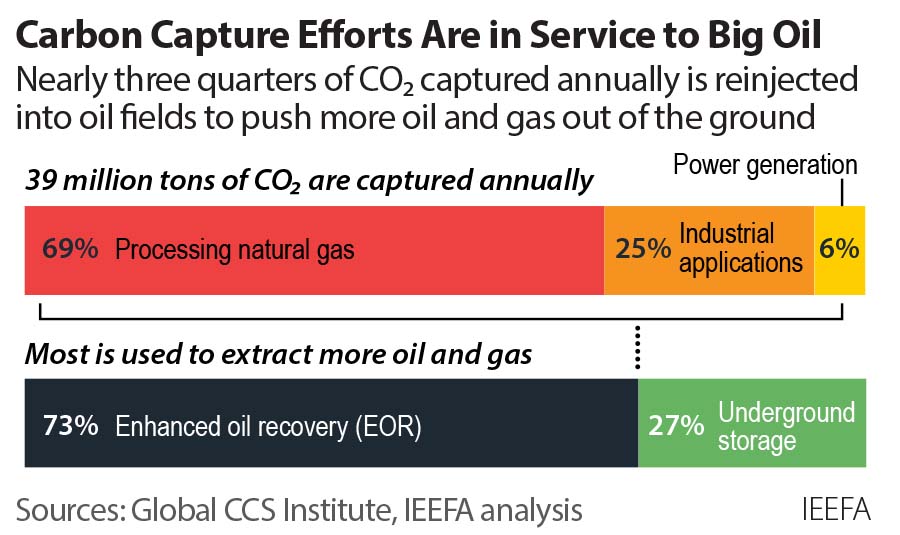 Finally, 13 flagship cases (10 in operation, two that have failed and one that has been suspended) comprising about 55% of the total nominal capture capacity operating worldwide have been reviewed in detail. The projects are flagship in different senses, with each of them having unique aspects of importance.

Our sample is comprehensive, enough to learn lessons about the whole sector. IEEFA estimates that the studied cases have captured more than two-thirds of all anthropogenic carbon dioxide captured in history.

Further extrapolated in our conclusion at the end of the report, we found: